Hope you guys all like the new interface of SB Nation United. It looks really sweet.

After I and nearly every other Mystics fan demanded it for quite some time, Monumental Sports and Entertainment finally did the right thing and terminated Trudi Lacey yesterday. Despite this change, the WNBA still didn't even put it on the front page, which seems to be a reflection on how irrelevant the Mystics franchise has become over the course of 15 seasons. But that is now in the past.

Now that one major move has been made, what should owner Ted Leonsis, team president Sheila Johnson, and the folks at Monumental Sports do in order to put the Mystics on a positive trajectory for the future so this franchise can be one that players want to play for and fans are proud to root for?

Links regarding the Mystics' Move:

Before I get to the future, first I want to acknowledge that Coach Lacey took over a situation that was very tough. She also was part of the 2009 and 2010 teams that made the playoffs and deserves some credit for being part of that era. But as GM and head coach in the two years that followed, it didn’t work out.

On yesterday’s open thread, a lot of us, myself included were in a celebratory mood to say the least. It may seem that we are celebrating the fact that she lost her job. Obviously in the American economy last several years, unemployment has been higher than in the past, and losing a job is no laughing matter. I myself do not wish for anyone to lose his or her job, regardless of job performance, or whether I like someone personally or not. I really don't.

However, at the end of the day, Lacey’s job performance as GM was downright horrible and her coaching was not much better at best. Therefore, she had to be terminated. At least for me, I was in a very happy mood yesterday because the team took a necessary first step in the right direction on the "Road to Respect" (sorry to take a page out of the Team USA women’s basketball team), but for the Mystics, that really applies in every sense of the word.

Thank you Coach Lacey for being part of those better times in 2009 and 2010 where you honestly were part of the resurgence of this team, and those were great times. Also, thank you for trying to put the team back on track, and I wish you the best in your future endeavors.

So, for Monumental Sports and the Mystics, here are some things they need to do to ensure that this team continues to move in the right direction from now on:

Monumental Sports suffered quite a thrashing with its WNBA team’s performance, reputation, and perception since 2010. As I have indicated in numerous posts, Lacey became the GM/HC of a team that was shellshocked by the front office move, which was what ultimately made Lindsey Harding and Katie Smith demand trades out of town. I don't blame Coach Lacey for making those moves, because really, those trade requests were a symptom of the original decision to terminate Angela Taylor and Julie Plank to save money.

It is certainly arguable that the 2010 Washington Mystics team's success would have likely not been sustainable as a dynasty, considering that from hindsight, Alana Beard sat out the entire 2011 season, Mo Currie nearly sat out the entire season, and Katie Smith declined for sure in Seattle.

However, I do think that a Julie Plank coached team would have been good enough to get in the playoffs for a third straight season, and perhaps advance into the Eastern Finals in 2011. For 2012, if Alana stayed, would a backcourt of Beard and Harding along with Lang in the low post be enough to propel DC to the playoffs in 2012, or would the Mystics be not unlike the Liberty was this season? I'd rather take my chances on that than watch what I saw last two seasons.

I am glad to see that Sheila Johnson acknowledged that she would look into the possibility of hiring a GM separately from a head coach, so at least on the surface, she has learned the hard way, like everyone else in and around this franchise has the past couple seasons. I am also glad that Ted Leonsis has also said the same where he indicated that a new GM may or may not be the head coach. He also promised transparency with the fans. Let us hope that it all works out this time.

2. Rebuilds Must Be Focused On Youth!

This guy hit the nail on the head (thanks blackandgoldforever): 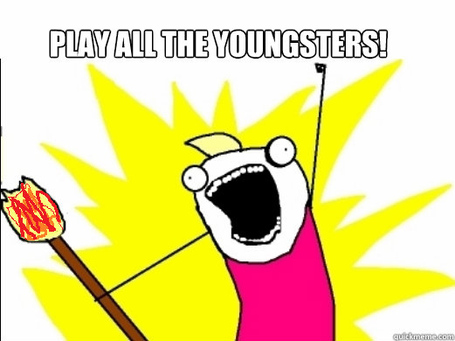 The lack of rebuilding around younger players in 2012 was the #1 reason why I wanted Lacey out. She made trades by letting go of younger players for older players who for the most part weren't all that special on their former teams, and also let go of two first round picks quite early in their careers or even before they could start.

The coaching wasn't much better, like the fact that she played Natalie Novosel spot minutes at best most games, or made line substitutions quite often, but I think that was symptomatic of the GM'ing job Lacey had when she expected that veteran players she brought in would provide certain skills or other abilities but ultimately didn’t do so, or mesh as well with the team as she would have hoped.

Whoever the next GM is must be focused on bringing young talent like what happened in Tulsa, even though it is also arguable that the Shock was forced to do it because no veteran free agents wanted to play there.

3. Do NOT pick a player in the 2013 Draft because she is from the DC area or Mid Atlantic, or played in a local college team. ONLY PICK PLAYERS WHO ARE THE BEST PLAYERS FOR THE SYSTEM!

A lot of WNBA teams have been regionalizing like New York is doing with Rutgers, Connecticut is doing with UConn, and Indiana with Purdue. The Mystics like the ACC, and this past season's team had three Lady Vols too, in addition to two Dukies, a Terp, and a head coach/GM from NC State.

Believe me, Mystics fans do not care what college the players come from or if her hometown is in the DMV; they want the BEST PLAYERS FOR THIS TEAM, END OF STORY! The Mystics fans who also like the Maryland Terps root for Mo Currie as hard as they will for Crystal Langhorne any day of the week for pro games. Trust me. Seen it myself many times.

Speaking about Mo Currie, she is from the DC area too and same for Jasmine Thomas. This ties in with "Our Girls" Syndrome. Again, I and other fans don't care where the hell Mystics players come from! Just put the best team available and we'll be happy.

To be fair to our players with local ties, Mo Currie fortunately has proven to be a damn good player, and same with Lang. However, I like their games because they can play ball first, not because they are from my area one way or another, and the same goes for any and all future players for this team.

4. Do not overvalue current Mystics as "untradeable" with the exception of the 1st round draft pick.

As I have said before, the Mystics do not have any superstars on the team and haven’t had one since Chamique Holdsclaw. Not even Beard or Langhorne truly fits that category of player. Otherwise if nothing else, the Mystics would have been featured on ESPN more than just once this season, and that was because of the other team's star player.

At any rate, depending on which player comes to DC, the Mystics must be willing to trade anyone, including Langhorne in order to put additional complementary players around the young star, especially if it is Brittney Griner or Elena Delle Donne because in order for them to flourish, they will need backcourt support that is superior to the current lineup on the floor.

While I like Lang's game and think she's a kick ass player, she appears to be at her best as a #2 punch to another more dominant scorer if a team was a juggernaut. Then again, Crystal's exceeded expectations so far in the league so maybe she could be that type of player and laugh in my face. But still, I would not rule her out of any trade scenario if it presented itself favorably to this organization.

5. Do NOT consider the first round draft pick as a savior.

Regardless of who the Mystics pick, she will be a foundational piece and good chance that she'd be the franchise player as early as day one, not unlike John Wall was with the Wizards in 2010. However, to assume that this player would have to win games immediately with little talent around her compared with other teams in the league is foolish.

This ties with earlier points, but while a lot will be expected from her, she still will need complementary players who can amplify her strengths and cover her weaknesses, and this will help improve the team's record in the long run.

So, what are your constructive thoughts on the Mystics' upcoming rebuild from 2013 and going forward?