A few weeks ago, Mirin Fader wrote an article for LASparks.com describing Los Angeles Sparks point guard Kristi Toliver's role in representing a changing of the guard (literally) in the WNBA.

Toliver's emergence as a productive full-time starting point guard represents something near the extreme in the transition from the pass-first to scoring point guard in the WNBA. No point guard in the league had a higher usage rate than Toliver entering the final week of the season (24.34%) and only one (Phoenix Mercury rookie Samantha Prahalis) has a lower assist ratio than Toliver (21.54%), which actually makes her a slightly more "pure" distributor than she was last season when she was sharing ball handling duties with Ticha Penicheiro.

Yet as much as Toliver's performance this season might represent a shift in point guard play in the WNBA, the fact that she succeeded Penicheiro as the Sparks' starting point guard is both a fitting symbolic coincidence and a convenient resolutive plot point in the narrative arc of this shift in point guard play. That Penicheiro will retire after the same season that Toliver finally came into her own pretty much brings the narrative to completion.

Of course, while Penicheiro and Toliver crossing paths in L.A. is a rather compelling framing narrative for the transition from pass-first to scoring point guards, their relationship as players is more of a representative case - perhaps even epitomizing this shift - than the catalyst in the narrative or even the ideal end point; its significance is symbolic rather than a statement that Toliver could replace what Penicheiro offers a team.

StormBasketball.com ran a 2004 feature describing how that season - with then-rookie Diana Taurasi running point for the Phoenix Mercury - was the tipping point in the shift from "traditional" to scoring point guards that had been a couple years in the making. One of the "two remaining archetypes" of the traditional point guard mentioned in that piece even then was Penicheiro, who had led the league in assists per game for the six previous seasons and would end up leading the now-defunct Sacramento Monarchs to the WNBA Finals in the next two (the 2005 title & '06). Even then, it was evident that the point guard at the more "traditional" end of the spectrum was an endangered species. Over the past year or so, we've seen the last vestiges of the pure point guard in the WNBA slowly disappear.

Really, this final salute to point guard purity in the WNBA almost could have been written last year when former Atlanta Dream point guard Shalee Lehning retired due to injury. Point guards like Penicheiro and Tully Bevilaqua were obviously headed toward retirement and Kelly Miller was steadily moving toward the scorer end of the purity continuum since Phoenix traded her. At her best, Temeka Johnson was a bit more of a scorer than pure distributor and after going up and down the scale for the past few seasons, has had a solid year for the Tulsa Shock this season in more of a scorer's role.

Lehning was sort of heir apparent to the point guard purity throne - as noted last year, Lehning barely had two shot attempts per game last season if you combined field goals and free throws. It doesn't really get any more pass-first (second and third) than Lehning was and she was the only one among her more highly touted peers in the 2009 draft - Toliver included - who even approached the archetype that Penicheiro represents. 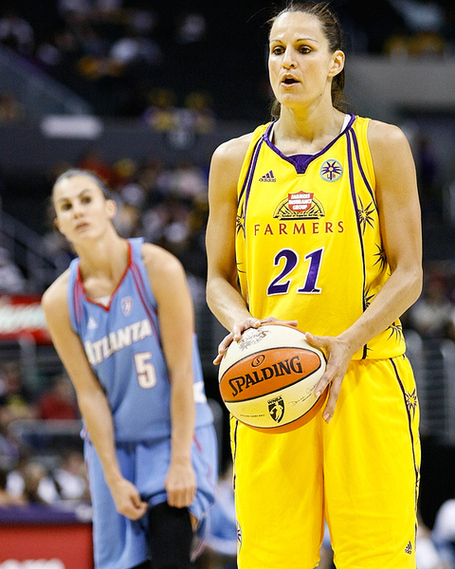 Connecticut Sun guard Renee Montgomery was known to have more of scoring mentality when she entered the league and has essentially been given the green light to express it off the bench this season. Indiana Fever guard Briann January was also creeping closer to the purest end of the continuum before losing her season to injury last season, but has fallen back to the middle of the spectrum this season. Alison Lacey, drafted in 2010, was probably the next young point guard who figured to be more at the traditional end of the spectrum, but hardly left the bench for the Seattle Storm and hasn't returned to the WNBA since. That leads us to Courtney Vandersloot, a highly touted lottery pick out of Gonzaga who Penicheiro expected to mentor by way of advice and example when she put off retirement to sign with the Chicago Sky this past offseason.

Storm point guard Sue Bird once described Vandersloot as the rare breed of pure point guard and she certainly seemed to fit the profile. A Gonzaga alum who claimed John Stockton as a mentor in college, Vandersloot was an efficient scorer in college but also a dynamic distributor, becoming one of very few players in NCAA history to reach 1000 assists and having a pure point rating that will likely remain unrivaled. Yet while she might still be the favorite to become the "purest" rotation point guard in the league in the coming years, even she falls far short of where Penicheiro stood for most of her career. In fact, with her having an above average usage rate (20.88%) relative to other point guards in the league this season - and a small increase over last season - there's a pretty compelling argument that Vandersloot's most productive niche in the league will be somewhere in the range of Minnesota Lynx point guard Lindsay Whalen on the graphic above: clearly a distributor, but also a scoring threat.

Vandersloot's development as a WNBA point guard, even over the course of this year with the opportunity to work with Penicheiro, might end up punctuating the point that purity is not a goal unto itself; the relationship between purity and productivity is tenuous at best. There are a number of ways to play point guard, as illustrated by the top three in the game today: Bird, Whalen, and crafty San Antonio Silver Stars guard Becky Hammon. The next generation of point guard, which includes that highly touted 2009 draft class as well as Vandersloot and Notre Dame senior Skylar Diggins, is just about as diverse in their style of play to the point where at least a couple might stretch our conception of who we classify as a point guard to its very limits.

Yet the gradual disappearance of the more traditional point guard from the league - and the rise of a number of different styles of play in between the pure and scorer poles - do help to frame Penicheiro's legacy as a WNBA player beyond simply being the league's all-time assist leader, entering the season as second all-time in steals, leading her Monarchs teams to consecutive WNBA Finals, and being selected as one of the league's top 15 players of all time. 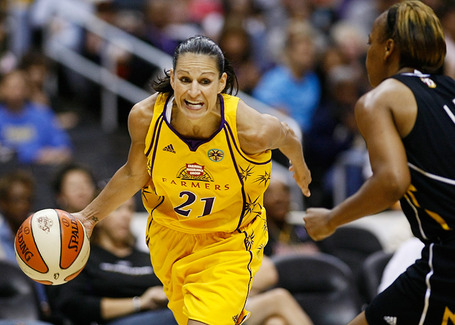 Penicheiro infused the sometimes bland notion of selfless purity with the type of showmanship that Magic Johnson brought to the Showtime Lakers of the 80's. In that sense, she's certainly not an unprecedented type of player in terms of expanding how we understand the game of basketball broadly, but her style almost without question stands out as unique within the women's basketball world.

Penicheiro shattered whatever ill-formed preconceived notions I had about women's basketball when I first saw her play at Old Dominion back in 1998, probably standing as the first time I truly watched a women's basketball player live and thought she's a baller - not a women's baller, but she can just flat out ball. My own naivete vis a vis the women's game aside, I struggle to recall a time that I have ever seen one individual completely control a game despite an almost steadfast refusal to shoot the ball. Playing against CAA players in college, it almost seemed as if she was playing a game governed by entirely different principles; against WNBA competition, even as the game has evolved over the years and rendered the "pure" pass-first point guard an endangered species, she mastered the principles of deception, motion, pacing and space to productively play the game unlike anyone else has. And as much as any player ever has, her style of play is an expression of the love for the game she talked about in her statement.

In a nutshell, Penicheiro was the personification of creativity on the basketball floor.

Legacies are always difficult to define as we're witnessing them unfold because we don't want to confine them to the present yet sometimes lost with the passage of time as the fine details wash away and we only recall the highlights. But the fact is that basketball has rarely seen a player like Penicheiro and the way things are trending in the WNBA - including both the younger generation already in the league like Toliver and the point guards expected to enter the league from the NCAA ranks in the next year or so - it's highly unlikely that we'll ever see another pure point guard anywhere near as productive as she has been in her career. Her retirement is, in effect, the end of the era that has been nearing its conclusion for some time. That level of significance alone is something few players in any sport can claim and no matter how anyone feels about women's basketball, it's hard not to appreciate her contribution to the game as a whole.