The Shock have been through quite a few periods of ebb and flow in their short history in Tulsa, both on and off the court. This year for Tulsa will prove to be their most 'successful' of the last three, with the Shock hitting the six-win mark with six games to go. In 2010, Tulsa's final win tally was also at six, but it took until the last game of the season, a home victory against Chicago to get there.

Here are some shots, provided by Troy Littledeer, of the last Shock home game on Saturday, an 89-66 loss at the hands of Seattle, who clinched their spot in the playoffs with the win (and a Phoenix defeat). Still to come in the season are two games with San Antonio, a pair against New York, and trips to Phoenix and Indiana. There are two more opportunities to see the Shock play at the BOK, vs. San Antonio tomorrow and vs. New York, Thurs., Sept. 20.

Just one game behind the Mercury in the Western Conference standings, Tulsa still has the potential to climb out of the cellar and finish in fifth rather than their somewhat customary trailing spot in the league. 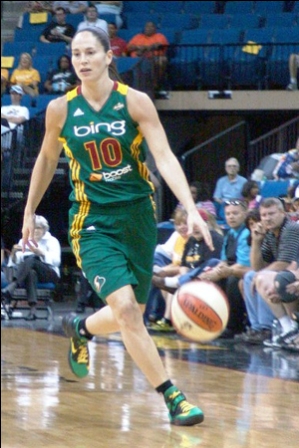 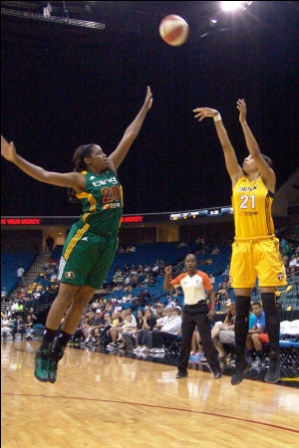 Sue Bird finished with five assists and 11 points on 3-of-7 shooting from long range. Bird, normally the big-time Storm performer against the Shock, was eclipsed by the stellar night of Camille Little (right, guarding Jen Lacy). Little posted career- and game-highs with 28 points on 12-of-17 shooting and nine boards.

"My opportunity is in front of me and I am just trying to capitalize on and concentrate on finishing at the rim," Little said after the game. "I'm undersized and sometimes it's difficult but I'm feeling good, I'm healthy and I hope I continue to play well." 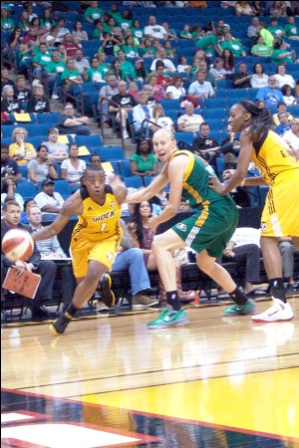 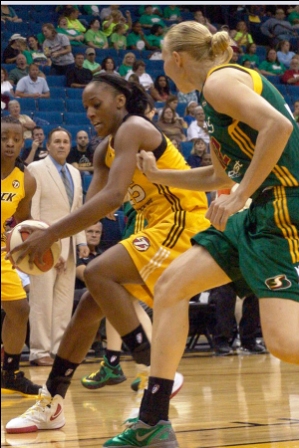 The rookie duo of Riquna Williams and Glory Johnson continues to be a staple of the Shock's offensive and defensive schemes. Williams finished the night with 13 points on 4-of-9 shooting and six assists. Johnson had a tough go from the field, making only one of her nine attempts, but contributed by hitting 5-of-7 from the stripe, picking up three offensive rebounds and two steals in the outing.

"When you look at it, you can't shoot 33 percent and them shoot 58 percent," Tulsa coach Gary Kloppenburg said. "You're just not going to win a game like that. We missed a lot of inside shots that we need to get down and that's the bottom line. The shooting percentage." 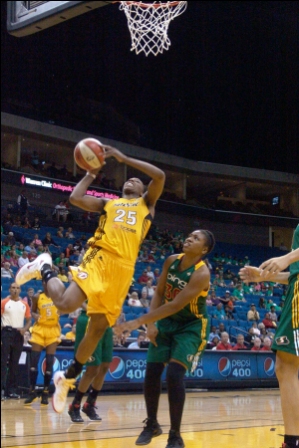 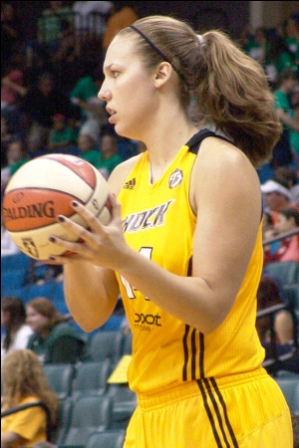 Glory is third on the team in scoring and minutes per game, averaging 11.6 points in 27.9 minutes in her rookie campaign. She is leading the team in rebounds (6.7 rpg, 3.0 orpg) and steals (2.21 spg) to put together a very impressive first year in the league. Sophomore player Kayla Pedersen, who has been battling staph (which was classified as flu-like symptoms) has been back on the court for the last two games against the Storm. She missed the previous seven contests, only playing in an Aug. 17 loss to San Antonio since the Olympic break. 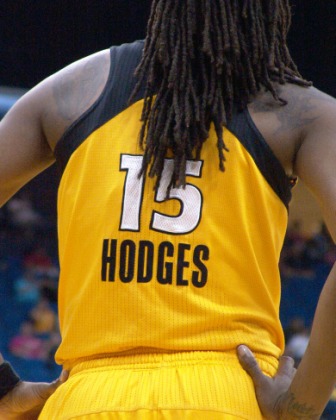 Roneeka Hodges who played the first 12 games of the season with Indiana, has been contributing to the Shock in a big way. In her eighth year in the league, she is averaging career-high numbers with 11.6 points per game on 46 percent shooting. Against the Storm, Hodges drained 3-of-5 3-point attempts to end with 10 points. Tulsa's other double-digit scoring effort came from Ivory Latta, who had a team-high 14 points on 5-of-13 shooting.