Atlanta runs away in second half: Still no signs of an "Angel"

Share All sharing options for: Atlanta runs away in second half: Still no signs of an "Angel"

As Hurricane Isaac left some lingering effects on the city of Atlanta, it seemed like that wasn’t the only storm to cause some debris.

For the second straight game, there was no sign of Atlanta’s capricious superstar -- Angel McCoughtry -- who is still suspended indefinitely. McCoughtry has been rumored to be the catalyst in the firing of former Dream coach, Marynell Meadors

Early on, the atmosphere in Philips Arena was gloomy and dreary; the Dream's play in the first half of their 82-59 victory seemed to reflect that. 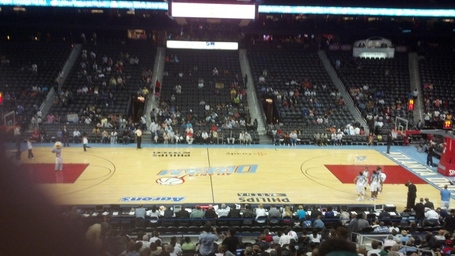 Their energy could only be described as lethargic and some of the players’ body language seemed to reflect the lasting frustrations of this week.

With Atlanta not playing its best basketball in the first half, the struggling Mystics were able to impose their will on the game. Mystics forward Monique Currie was constantly penetrating the Dream’s defense and Crystal Langhorne established herself with 10 points to help Washington take a 33-31 lead into halftime.

"I think we played very well the first half," said Currie. "We played as a team and we slowed them down in transition which is what they’re good at. I’m very pleased with how we played in the first half"

From simply a basketball perspective, it would seem like Atlanta just had a bad first half but you could tell that something else was amiss:

Was it McCoughtry’s absence on the court?

Was it the ongoing drama that led to the unforeseen firing of Marynell Meadors, which seemingly led to not only this first half performance but also a loss to Tulsa?

Was it the uncertainty of not knowing whether McCoughtry would be back?

Whatever issues that seemed to cause Atlanta’s dismal and stagnant performance for the past six quarters were remedied in the next two. And even though all the questions have not been answered, it was obvious that the Dream were able to refocus themselves in the second half.

"At halftime we went after them about movement, body movement and angles, sliding over and spacing out a little more and trying to get into our post game," said Dream coach Williams. "And in the second half we up-tempoed ourselves. In the transition game we got some run-outs from (Armintie) Price and (Tiffany) Hayes. We just tried to push the ball up the floor with the pass and not the dribble."

"They came at us, were physical and took it to us," said Mystics coach Trudi Lacey. "It’s always tough to win on the road. Once they made the run it snowballed, we’re working together to become a better team and to put 40 minutes together"

Now who knows what the future holds for the Dream but it’s obvious that they were able to move past the off court issues for one half in dominating fashion.

"Obviously (McCoughtry) is a great player and she cannot be replaced," said Hayes. "But at the same time we can come together as a team and contribute more from everybody instead of one player doing it all. I think today it was very balanced and we did that."

It wasn’t about the final score, it was about so much more; it was about a team rallying, playing for each other, a team willing to face adversity head-on. As the old adage says, "Teamwork makes the DREAM work."

"Everything tonight was about teamwork," said Ericka de Souza. "We have been working extremely hard and we don’t have to think about any problems. We just want to think about giving our best and keep going and winning. We did that tonight."