2012 WNBA Point Guard Rankings: How Good Has The Lynx All-Time Assist Leader Been This Season?

Share All sharing options for: 2012 WNBA Point Guard Rankings: How Good Has The Lynx All-Time Assist Leader Been This Season?

If the Minnesota Lynx make it to the WNBA Finals this season - as many people expect - Lindsay Whalen will become just the second player to start in four WNBA Finals series at point guard, barring some sort of unforeseen circumstance.

If longevity matters, it would be 8 years between her first (2004) and latest WNBA Finals, with her first coming against Seattle Storm point guard Sue Bird (who made it again in 2010).

Perhaps we don't consider things like that as "accomplishments" in any particular way: some might argue, for example, that this Lynx team is so loaded that coach Cheryl Reeve could plug in any number of point guards and win games. Others might say that a milestone like that for a relatively unsuccessful franchise (prior to last season) doesn't mean much. But the fact remains that if indeed the Lynx make the Finals again, Whalen will have gotten there in 4 out of her 9 years in the league; the only point guard with a better track record in that regard is former New York Liberty great Teresa Weatherspoon.

If we value winning as one measure of a point guard (as a proxy for how well they lead a team, if nothing else) Whalen should already get credit as one of the greatest winners at the position. But she also wasn't just a role player bringing the ball upcourt and dishing to Hall of Famers; what helps distinguish Whalen from the crowd is that she's one of the most efficient and productive point guards in the league's history. 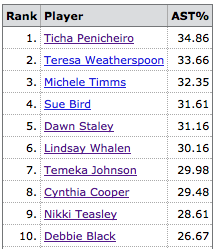 The WNBA's all-time career assist percentage leaders after the 2011 season (via Basketball-Reference.com)

Entering this season, Whalen was sixth all-time on the list of assist leaders by percentage and it's no coincidence that the list above includes all four of the point guards who were named to the list of Top 15 WNBA Players of All-Time released last year. And as I said last year, it's difficult to understand how she wasn't even nominated for that honor given her accomplishments.

But this is not about where Whalen stands in the discussion about the greatest WNBA point guards of All-Time - we can revisit that after this season unfolds.

All of this is just to say that there's something more special about Whalen setting the Lynx All-Time assists record than merely playing with talented teammates - between leading teams to the Finals and putting up impressive numbers, Whalen is carving out a unique legacy for herself both in terms of accomplishments and her style of play, as described by Mark Remme of Lynx.com.

McWilliams-Franklin said when Whalen misses an open teammate, she tells her she’ll find them next time. Augustus independently made the same comment. She said Whalen always credits her teammates for finishing the play.

"That’s Weezy, that’s what she does," Augustus said. "She’s a master at getting the ball out there, and she always says thank you to us for making the shots. But she does an incredible job finding us and putting us in position to score baskets for her."

Her teammates use the same words in describing Whalen. Toughness. Crafty. Unique. Strong.

"I don’t think there’s anyone quite like Whay," Peters said.

This isn't the first time I've found reason to praise Whalen and it probably won't be the last as she consistently manages to impress whether she's winning championships for the Lynx or winning a gold medal in the Olympics.

But is she "the best point guard in the world" - or at least the best in the WNBA this season - as teammate Taj McWilliams-Franklin said in Remme's article?

As described in the past, point guards probably shouldn't be measured on their production as much as the decision-making underlying that production. In the past, I've used two statistics as primary proxies for decision-making among the league's top distributors, as follows:

As previously described, I'm defining distributors as players who are the most willing passers (an assist ratio greater than 21%), which includes all 12 of the league's starting point guards but might exclude a few reserves who are responsible for ball handling duties. The list of 20 that met that criteria are as follows:

5. Lindsey Harding, Atlanta Dream: Choosing between Harding and Danielle Robinson of the Silver Stars was actually sort of tough going strictly by the numbers: they're similar in a number of ways but Robinson is the more efficient passer and scorer.

What separates Harding are two things, related to why she's a good fit for the Dream: first - and actually the reason usage rate was added to the list above - is that Harding has a larger scoring role on her team, which naturally means more shots and more misses and thus lowers efficiency. That's not a knock on Robinson, but has the be taken into account when considering the numbers above - 15% is a low usage rate. And second, Harding can shoot the three, which is especially helpful on a team that can use players to spread the floor with dynamic wing Angel McCoughtry and strong post Erika de Souza. Obviously, the Dream aren't going to run a lot of plays to someone shooting under 30% from the 3-point line, but it makes their offense more dynamic, at least in theory.

That's not to say Robinson doesn't have a bright future ahead of her, but based on this season's performance , Harding has the slight edge over her, Temeka Johnson, or Kristi Toliver - who were next in line - for being the more "complete" player.

Lawson is one of the bigger surprises of the season as she is not typically considered a "top five point guard". But her efficiency numbers are off the charts this season. She's more of a scoring point than a "pure point guard" but she has filled the role admirably, doing an outstanding job of making plays for others and finding her own offense while not committing turnovers (she has the lowest turnover ratio of any distributor).

She's getting to the free throw line at the highest rate (37.62%) of her career - already having matched her career-high of 73 free throws set last year through 21 games this season - and has an astoundingly high 67.44% true shooting percentage due to the combination of knocking down about 92% of those free throws and shooting 59% from 2-point range in addition to her 42.6% 3-point shooting. This isn't only a career-year for Lawson, but she has been a model of efficiency this year that few players can hope to match.

So why isn't Lawson at least above Hammon, if not the perennial top two contenders? No point guard in the league has the ball in her hands more than Hammon and that counts for something. With a much higher usage rate and more than 16 touches per game more than Lawson in slightly less minutes, the Silver Stars offense is clearly more reliant on Hammon to make plays as a distributor and scorer and that naturally results in more errant shots and turnovers. In fact, that Hammon is as efficient as she is at the rates she makes plays is a feat unto itself - this is probably the most balanced Hammon's game has been as a Silver Star.

Hammon is shooting a career-high 49.1% from the 3-point line and is on pace to have the most efficient scoring season (65.13% true shooting percentage) in her career as a starter (New York or San Antonio). Her combination of scoring efficiency and passing ability has made Hammon one of the most dangerous pick and roll point guards in the league right now - similar to Whalen, she's crafty and her knack for scoring just makes her a tough guard. Lawson works extremely well for the Sun's style of play, but Hammon has been the more dynamic point guard this season.

Whenever Lauren Jackson is gone, Sue Bird turns into more of a scorer and ends up rating as a fringe MVP candidate. This season is not a whole lot different - Bird is probably the point guard right now with the best statistical argument for being her team's MVP, which obviously means something. Bird can be a big time scorer to carry her team when necessary, but is also patient enough to run a half court offense to perfection.

Bird is probably one of the most poised point guards who has ever played the game and among the most precise in how she picks apart defenses rather than busily dismantling them with the dribble drive.

Yet what separates Whalen from every other guard on this list is that she is by far the most well-rounded in the league. And there isn't a whole lot of room for debate on that.

She has the ball in her hands more than most players in her 25 minutes per game and is the second-most efficient distributor, a 46.7% 3-point shooter, adept at using her size in getting to the line and a better rebounder than some players bigger than her. With that combination, there is no point guard more dangerous in transition than Whalen and for a team that thrives in the open court she's a perfect fit.

If there is anyone still out there who still believes women's basketball is just "fluffy-fluffy" ball, Whalen is the anti-dote to relieve them of such nonsense perhaps even moreso than more highly touted players with flashier games; there's a take-no-prisoners, by-any-means-necessary attitude that is unparalleled simply due to the unique combination of physical attributes and skill that Whalen brings to the floor.

But the numbers don't really define Whalen either - it's what doesn't always show up in the stats that make her a truly great floor leader.

Earlier this year, Brian McCormick added a point about the distinction between decision-making and play-making that is particularly relevant in any discussion about Whalen:

My running commentary and the auxiliary findings from this study suggest that most poor decision-making is unnoticed because it does not result in an immediate turnover.

The good decision-makers are not the players that avoid turnovers, but the ones who make plays...Playmakers act early. They make plays.

McCormick's point fits with a point that Henry Abbot of ESPN's True Hoop made back in July what fans tend to watch in a basketball game influences what they value.

People tend not to see the little things Whalen does: getting the ball to the open player at the right time, using angles better than almost any point guard playing the game today, using dribbles efficiently, and not getting locked into either a distributing or scoring mindset but efficiently picking her spots.

And the fact that there's nothing fancy about it - she nonchalantly makes everything look easy - really makes it hard for her to stand out even as she continues to rack up accolades.