After the Chicago Sky's loss to the Connecticut Sun on July 13, a friend of mine who was at Allstate Arena texted that Sky center Sylvia Fowles looked like she spent most of the game "hiding" on offense.

It almost sounds like a ridiculous thing to say, even in the world of basketball where people just above average height for human beings look tiny - the 6'6" All-Star who would later try to dunk in London can't possibly expect to hide herself with almost all eyes on her, especially without guard Epiphanny Prince to shoulder the burden of offensive focal point.

And yet, sure enough when you look at footage of that game you see a player literally hiding herself in plain sight, most noticeably when a 6'3" forward like Mistie Mims was responsible for guarding her and doing a surprisingly good job despite giving up 3 inches and far more strength.

With that in mind, seeing Fowles pick up a technical foul after battling with Erika de Souza down low in last night's game against the Atlanta Dream was actually a welcome sight.

Sky statistical MVP: Sylvia Fowles gets fired up in the second half

After picking up two fouls, Fowles checked out of the game eight minutes into the first quarter and didn't return in the first half. Perhaps it was merely a move by the Chicago Sky coaching staff to preserve their star center, second-year reserve Sky center Carolyn Swords also came into the game and thoroughly outplayed Fowles making her re-insertion into the game less than pressing.

Setting aside the pre-Olympic past as a prologue for what occurred in the fourth quarter, Fowles being outplayed by Swords in the first half provided enough of a backdrop to actually appreciate her technical in the fourth quarter - Fowles needed to show some fire at some point if the Sky were to avoid losing their 9th game in the last 10 outings. After Fowles scored 7 of her 13 points in the third quarter, Dream center Erika de Souza started to just ramp up the physical intensity. Fowles had a few words with an official after a failed offensive possession then again after an aggressive defensive play on the other end, which drew the technical foul with about 6 minutes left in the fourth.

Fowles so rarely shows that level of emotion that it seemed like she was poised to take over the game after getting herself to the line for her 7th and 8th free throw attempts of the game with 4:28 left with an opportunity for the Sky to take the lead. She demanded the ball, she went up strong, and she (briefly) looked like the dominant force that everyone expects her to be and all the things that were lacking in the three games prior to the break when Fowles ranged from hiding to just plain not very good.

The problem was that de Souza - responsible for containing Fowles throughout the game and drawing that tech - wasn't backing down.

de Souza is a load for any player to contend with, but she dominated the paint in this one almost as if she had something to prove after Brazil failed to make it out of the preliminary round of the Olympics.

With Fowles looking like she had finally gotten fired up and ready to take over, de Souza was the antidote. de Souza got two of her four steals on Sky attempts to get the ball inside in those final four minutes and added the layup with 57 seconds left that essentially put the game away for the Dream; even once Fowles seemed to assert herself, de Souza managed to almost render her effort irrelevant.

de Souza finished a game-high four offensive rebounds and 19 points, which exceeded that of anyone on the Sky. It wasn't that de Souza came out and did anything special to stop Fowles, she was just the stronger physical presence in the paint, holding her position and simply not giving ground. She was the aggressor in the post for most of the game; Fowles came on late, but never seemed entirely comfortable in the paint.

And with de Souza effectively containing Fowles, it was fellow Olympian Angel McCoughtry who simply dominated the final few minutes of the game.

If McCoughtry wanted to prove that her "game went to another level at the Olympics", last night's performance was a good start.

As described yesterday, it's not about the final point tallies for McCoughtry but how she goes about getting them: when she takes a lot of jumpers in the 11-15 foot range, she's not a very efficient player; when she plays the way she did in the Olympics - almost like a pure energy player who attacks the basket, crashes the boards, and takes what she's given - she is an extremely efficient player. 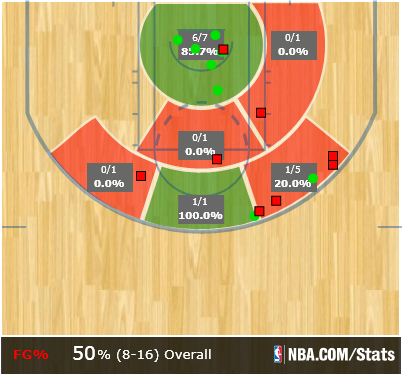 Last night, we saw the latter - a player who had game-highs of 8 rebounds and 5 steals in addition to her game-high 25 points. And aside from generally taking good shots, she got herself to the line to make 7 of 7 free throws. Perhaps she could've shot less threes, but consider that she shoots 36% from 3-point range this season - she's better off taking 3 pointers at 37% than those 2-point mid-range shots from 11-15 feet at under 30%.

Granted, on its surface her game doesn't look that much different than normal. It's when you take her performance in its entirety that a different mindset is revealed - McCoughtry's 6 assists represented an assist ratio of 19.94%, well above her season average of 9% prior to last night. Even when she picked up turnovers, many of them were attempts to make plays for others. When she's taking the ball to the basket and setting up others when she can't score, there's not much an opposing defense can do to stop her.

On a night when Epiphanny Prince's return to the court to save the Sky could've been the story, the biggest story was McCoughtry continue ascend to new heights in this league. McCoughtry isn't hiding from anything; she's the rare player who can will a team to victory, as cliche as that sounds. But what stood out about last night's game, was McCoughtry's willingness to share the scoring burden until she needed to score 11 of her 25 in the fourth quarter. We probably won't consider that her most memorable performance, but it could certainly be the beginnings of a turning point for her or rather a major step forward as a player.

Nevertheless, the Sky were up 1 point after Fowles hit those two free throws with 4:28 left in the game and it was hard not to hope that they'd get themselves back on the winning track after so many losses.

Then they proceeded to turn the ball over 4 times over the next 4 minutes, while scoring only one point on their way to a loss.

Those end-of-game turnovers revolved mostly around Fowles: the first was hers, the next two by Prince and Swin Cash were attempts to get the ball to her. And as is bizarrely common for the Sky, the turnovers came from everywhere, rookies and veterans, guards and posts, Olympians and mere All-Stars. Once again, it's not as simple as saying the Sky make turnovers on certain types of plays or against certain types of defenses (saying they turn the ball over when passing seems so broad as to be insufficient). They just seem to happen all the time.

For perspective of how badly turnovers hurt the Sky throughout the game, they were the more efficient scoring team (53.33% effective field goal percentage vs. the Dream's 50%), the better offensive rebounding team, and got to the free throw line at a higher rate. The only one of the Four Factors they "lost", so to speak, was the turnover battle in which they turned the ball over on nearly a quarter of their possessions.

There are times when these narratives about a team's weaknesses can become stale and almost dogma in that we begin to use them as almost reflex explanations for a team's struggles even when it's not actually the most significant problem. But the Sky's turnover problem continued to haunt them even with a fired up Fowles and the return of Prince - as much as we might want to see more from Fowles at times or hope that the return of Prince can help the Sky hold ground enough to finally make the playoffs for the first time in franchise history, the reality is that until they can stop making inexplicable turnovers they're going to make it hard on themselves.

Prince is not going to fix that because the problem was there even before her injury. A more assertive Fowles can't really fix that if her teammates are committing turnovers as they try to get her the ball.