Share All sharing options for: Why The Chicago Sky Were 'Not A Very Good Basketball Team' Without Epiphanny Prince

As harsh as it may have sounded for Chicago Sky coach Pokey Chatman to say that they were "not a very good basketball team" before the Olympic break, it's not exactly false.

Playing without star guard Epiphanny Prince, the Sky lost 8 of 9 games entering the Olympic break despite the presence of 6'6" Olympian center Sylvia Fowles. And while the knee jerk reaction from fans is typically that the Sky need to get Fowles the ball more often, that wasn't exactly the problem - Chatman put at least part of the responsibility of their July 11 loss to the San Antonio Silver Stars squarely on Fowles, as reported by Chicago Tribune reporter Fred Mitchell.

Asked to assess Fowles' performance, Chatman said of the 6-foot-6 center: "On a scale of 1 to 10 … a 2, just because she takes up space. This is a team that she has owned in the past. We had 52 post touches — 26 to Syl. ... You're not getting double-teamed. They are not bigger than you. They're not faster than you. Make sure they remember you. And they won't remember her tonight. That's on her."

Fowles finished that game with 6 points on 2-for-9 shooting as well as three turnovers.

To Chatman's point about touches, Fowles did get her share and the problem wasn't a double team - she just missed five layups over less athletic and smaller Silver defenders in that game. And unfortunately, the underlying problems in that game weren't necessarily limited to that one day - Mitchell has reported Chatman commenting that the Sky weren't a very good team at least twice this season, which suggests deeper problems.

And a close look at their final three games without a center near Fowles' MVP-caliber level - the Indiana Fever and San Antonio Silver Stars - provide a few good examples of those broader problems that have plagued the Sky.

Getting the ball to Fowles

As mentioned in a previous post about the 2012 MVP race, Fowles has put up impressive numbers this season (as usual) so that's why criticism like that from Chatman is immediately jarring in a sense and perhaps reads as on-off comment about Fowles on an off day. There isn't a starting center in the league this season who's shooting a higher percentage than Fowles from within five feet (70.2%) and she's so adept at getting to the free throw line that she's as dangerous an option in the paint as any in the league.

The problem is that she sometimes struggles to even establish post position even in games when she does in fact score quite a bit, as was the case against the Connecticut Sun. 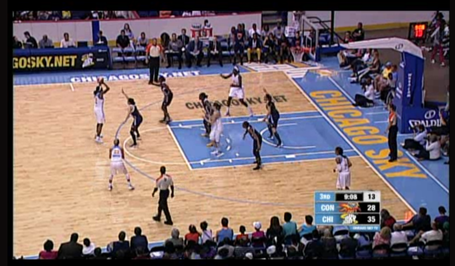 The play above resulted in a turnover because the Sky looked like they were trying to go in the post with Fowles and Ruth Riley in a high-low set against the Sun's scattered zone at the beginning of the second half. The problem here was that Fowles spent half the possession sort of floating around space trying to get open, but not really making herself a target - on this play, for example, she is "open" but that's a tough "entry" pass against the top defense in the Eastern Conference - floating it over the defender at the right elbow would almost certainly result in a steal making it a difficult option.

But perhaps a bigger problem is when Fowles does get position, she sometimes becomes part of the turnover problem - her 14.2% turnover rate is certainly not the highest in the league, but is just average for a center. 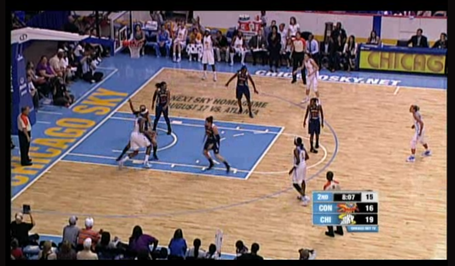 On this play in the same game, Fowles is being guarded by Mistie Mims one-on-one. However, instead of making a strong move toward the rim right away, she turned and put the ball in the floor as she turned toward the middle of the paint somewhat indecisively. The result was that Kelsey Griffin came down in help and stole the unprotected ball.

Another turnover problem that showed up in almost identical situations in all three games was when Fowles tried to pass the ball out of the post when she was doubled. 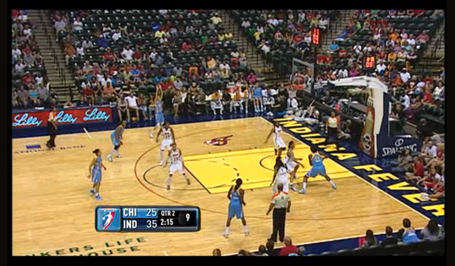 With Zellous dropping down to help out Tammy Sutton-Brown, Fowles immediately became a passer instead of a scorer and saw rookie Sonja Petrovic across the court with her hands raised. The problem is that Catchings seemed to know almost exactly what Fowles was looking to do with her head turned as Fowles gathered the ball. When Fowles tried to make the cross court pass, Catchings just stepped right into the passing lane to create the turnover.

if it seemed like Catchings knew what was coming, it's because this is a play that seems to occur often, almost methodically looking to Fowles in the post and then looking for the cross court pass. 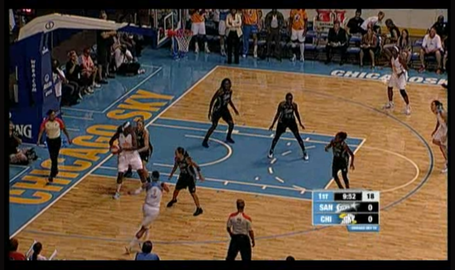 And it resulted in a turnover in the play above against the Silver Stars as well, which was strikingly similar to what they ran on the possession where Griffin stole it from Fowles who was guarded by Mims.

In those cases the problem wasn't getting position, but taking advantage of it - the Sky get awfully methodical in their sets and when they fall into the trap of going through the motions, opposing defenses are making them pay.

Yet while Fowles should shoulder some of the responsibility for the 1-8 streak before the break, turnovers getting the ball to Fowles happened far too often.

I need not tell you that turnovers are a massive problem for the Sky - the had the highest turnover rate in the league prior to the break (24.6%) and actually turn the ball over quite a bit trying to get the ball to Fowles. 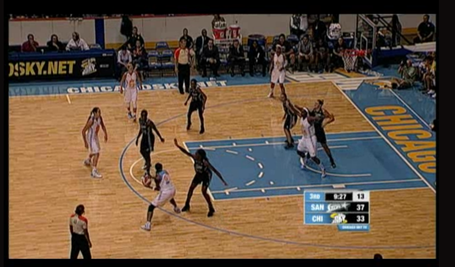 On this possession in the aforementioned Silver Stars game, Fowles clearly got position early, actually before Cash even got the ball on the wing. The play resulted in a turnover for two reasons: first, Fowles didn't actually seal Appel - she was sort of just standing in front of her. 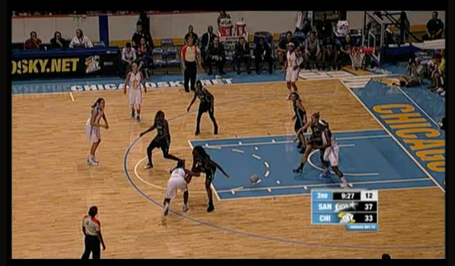 Plays like this where it seems that there's miscommunication or a poor feel for one another happened quite a bit and when it doesn't result on bad passes or ball handling turnovers it does result in poor spacing, which is not necessarily any better.

One of the most disappointing things about the Sky's loss 88-86 overtime loss to Indiana was that they had plenty of chances to put the game away: they entered the fourth quarter down 13, had an opportunity to win in regulation, and had every opportunity to win it in overtime.

But as the game began slipping away from them in the fourth quarter, spacing began a bit of a problem. 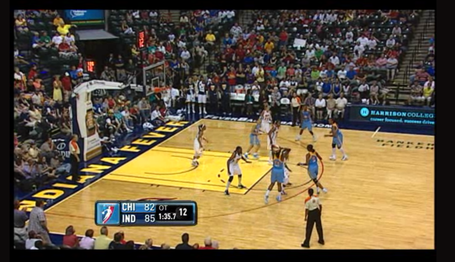 Why does it look like Briann January is all alone playing free safety with nothing to do? Because Catchings, who is standing at the right elbow is essentially guarding three players: Penicheiro is standing behind her, Willingham is right in front of her, and she's right in the middle of any pass to the right wing to Shay Murphy. Obviously the Sky needed some movement and they did get that. 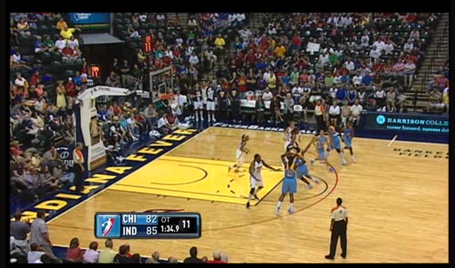 The play resulted in a shot clock violation as they never really found anything to do with the ball for the next 11 seconds and looked completely scattered.

This type of thing happened on a few occasions late in the Sky's game vs Indiana, where the players just didn't seem to be on the same page. And that speaks to possibly the biggest problem for the Sky this season.

We could point to poor point guard play as the root of all the Sky's problems, but when you look at the totality of what's going on it's also more than that - while neither Penicheiro nor Courtney Vandersloot have been very efficient this season, the entire team outside of Fowles and Prince has been largely unproductive. Swin Cash and Le'coe Willingham have had sub-par years after coming over from the Storm, Vandersloot is still an extremely turnover prone point guard, and Shay Murphy is the only player outside of Fowles or Prince who is even a remotely efficient scorer.

They have to look to Fowles on almost every possession to score, teams are figuring it out, and they are facing defensive schemes that basically dare them to do something else. On possessions when Fowles can establish position on the post, they struggle to find anything else to do.

That's why Prince was so valuable.

Ultimately, the biggest problem for the Sky was the most obvious: they couldn't win without Prince because they were playing without Prince.

It's not that Prince solves all of those problems, per se, but because she helps the Sky overcome them.

If Fowles can't establish in the post, Prince can score herself. If there's poor spacing, Prince can navigate her way through a crowd and create something where nothing existed previously. If they struggle to get the ball upcourt without turnovers, Prince can bring the ball up. If nobody else on the team is playing well, Prince has singlehandedly won games for them.

When that was gone - in addition to her defensive presence - all of these other problems plagued the Sky.

Before Chatman's assessment of Fowles after the Silver Stars game, she took responsibility for their loss against the New York Liberty. And perhaps we could put part of this on coaching: as often as the Sky have looked confused, methodical, or just plain not very good, perhaps we could say that the problem is a matter of coaching above anything else. But with all the veterans on this team, it's hard to really find any one specific explanation for their poor play other than the fact that they are really reliant on Epiphanny Prince to have any sort of success.