Four players from Glen Taylor's basketball empire, including Kevin Love from the Wolves are part of Team USA Basketball, making him the happiest basketball owner in the NBA family, aside from Jerry Buss, for obvious reasons today. But this isn't about Seimone, Lindsay, or Maya on Team USA even with the Gold Medal match tomorrow against France. What is up in Minneapolis with the WNBA team as of late? Let's see.

Links from the Team

Players reflect on the first half of the season. (read here)

There are more people involved in basketball operations than just coaches. Here is a piece on Chuck Barta and Keith Uzpen who are the Lynx's athletic trainers. (read here)

Taj McWilliams-Franklin is married to Reginald Franklin who serves our country, and she talks more about her appreciation for our military. (read here)

Another link on Taj and her kids. (read here)

Links From Outside The Team

There were many outside links on the Lynx, but with Seimone, Lindsay, and Maya on Team USA, nearly all centered around the Olympics.

Tim Allen, the lead blogger of Canis Hoopus, the Wolves' SB Nation blog passed away earlier this week, and was known for writing more about the Lynx than other SB Nation NBA team blogs. His service was yesterday. (Canis Hoopus | Obituary | Nate's take)

Old link, but a summary of what Coach Reeve wanted her players to work on. (From the Star Tribune)

Seimone Augustus had a segment on ESPN's Outside the Lines recently, where she talked in depth about her relationship with Tay Varner. (watch here)

A little bit too Olympic-y, but Maya Moore wants to be like Tamika Catchings. I actually see a lot of good comparisons between the two and I think Maya could be even better than Meek. (From the Star Tribune)

A three month old Canada Lynx kitten was on exhibit at the Minnesota Zoo in nearby Apple Valley, MN. Okay, that's not really a team link, but he could be the future official mascot, right? (Read Here)

When I was looking at the team's official page, something just didn't look right. Caps ad on a Minny team page? Really? I guess some type of analytical software within the NBA's IT department knows I'm from DC, knows I read a lot of Caps links, and therefore sticks a Caps ad there. 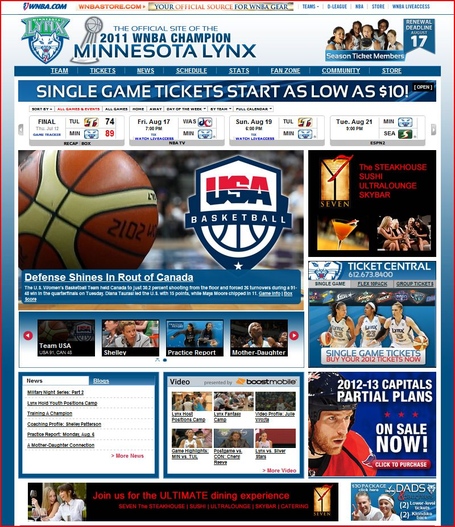 So, which team finishes in first place in the West for 2012?