The story of the San Antonio Silver Stars' first half struggles against the Phoenix Mercury last night can probably be summed up by their 3-point shooting.

The Silver Stars missed their first 11 shots from beyond the arc, failing to connect until guard Jia Perkins hit one off a second chance opportunity with 1:13 left in the second quarter. Although it would only be fair to attribute some part of their struggles to the Mercury's uncharacteristically intense defense, the majority of their shots were looks that a 36.7% 3-point shooting team might be expected to knock down - they went 4-for-14 on shots within five feet in the first half.

They weren't hitting much of anything from anywhere to start the game.

After hitting their first nine shots in a win against the Minnesota Lynx on Sunday, it was obvious that things wouldn't be coming quite as easily last night. And that's a large part of what made their 82-81 win last night so impressive, aside from proving that they could finish a close game to win their fourth straight. 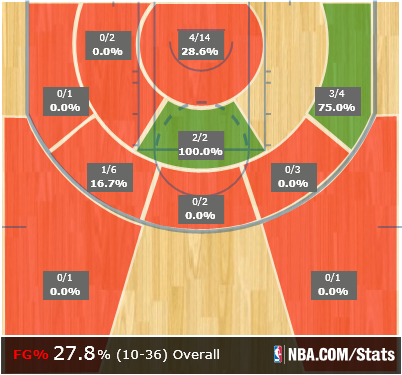 San Antonio shot chart for the first half against Phoenix last night. Phoenix led 38-31 at halftime.

As Terrence Thomas of the San Antonio Express-News wrote, the reality during their previous three games is that the Silver Stars, "...piled up 3-pointers at an absurd rate and were so efficient, they never trailed during that span."

That sort of shooting had to end at some point and it was clear by the end of the first quarter that tonight was the end of that "absurd" level of efficiency.

If the Silver Stars were going to win, it was going to require something other than just overwhelming their opponent with hot shooting and that started with a focus on the little things, as reported by Thomas.

"For us, it was just about composure," said Silver Stars forward Sophia Young, who had 12 points and 14 rebounds, including a crucial offensive rebound with five seconds left and her team leading by just two. "It was the little things that we did that pull us out during the game."

That a rebound would be the defining play in a Silver Stars' win was fitting given the somewhat unlikely way that they controlled the boards to help them stay afloat while shots simply weren't falling for them.

Entering the game with the lowest offensive rebounding rate in the league (26.7%), the Silver Stars controlled the offensive boards throughout the game and finished with a 36.36% to 27.03% advantage in that category that led to a 16 to 8 advantage in second chance points.

No player was more significant to that rebounding effort than Silver Stars forward Sophia Young, whose season-high 14 rebounds included a game-high 5 offensive rebounds (13.77%). But like everyone else, Young struggled to score in the first half.

Mercury posts Kyrstal Thomas and rookie Avery Warley deserves a lot of credit for 2-for-6 first half - in addition to doing a great job establishing position to defend the shots Young did take she also did a great job of limiting her shots in the first half by refusing to give up post position and forcing a few contested jumpers.

While the Mercury's defense on Young - who has been enjoying a MVP-caliber season thus far - was outstanding, the Silver Stars shot 27.8% as a team as they struggled to get anything going inside or outside. In that sense, it's worth noting that this didn't fit the pattern of many early-season losses for San Antonio when defenses forced them into settling for jumpers; they got a variety of looks but were having an off-night.

Meanwhile, Mercury forward DeWanna Bonner was hot on the other end.

While the Silver Stars struggled, Bonner was spectacular, opening the game with 19 points in the first quarter on 6-for-9 shooting.

Kristofer Habbas of SB Nation Arizona has more on Bonner's performance, but suffice it to say that she has emerged as one of the most lethal scorers in the league this season able to shoot over smaller defenders from well beyond NBA 3-point range and simply out-maneuver bigger defenders.

Things changed in the second half for the Silver Stars.

Part of that was some odd matchups - Young found herself defended by Charde Houston or in front of a guard off a rebound on one occasion and shot 3-for-5 for 7 points in the second half. And there were also moments where the Mercury just looked exhausted on the defensive end.

But another major factor in their ability to come back and win the game was getting transition, "early offense", and second chance baskets before the Mercury defense could even get set. Danielle Adams was a primary beneficiary of that as she scored 20 of her season-high 24 points in the second half.

Adams might not be the quickest player on the floor but one thing she does exceptionally well as a scorer is move efficiently to get to spots where she can make herself a threat to score. Last night, there were a couple of occasions last night were simply finding an open spot 2 passes away from a teammate who got an offensive rebound resulted in shots. When transitioning off defensive rebounds, she was also able to take advantage of the Mercury scrambling to find assignments to get herself in scoring position. None of that is to take away from the shots she did create for herself last night - she put the ball on the floor a few times to get to the basket or create space for mid-range jumpers.

The combination of Adams and Young hitting in the second half - the rest of the team was still only 6-for-24 - was a large part of what led the Silver Stars to the win.

While Becky Hammon didn't find her scoring touch until the fourth quarter, she was an efficient distributor throughout the game as she finished with four assists and no turnovers. And despite everything else that happened, Hammon's ball control represents a more subtle storyline that makes this game particularly noteworthy for the Silver Stars moving forward.

While the Silver Stars couldn't hit shots and Bonner looked unstoppable to help the Mercury take a 13-point lead in the third quarter, the one thing that carried them throughout the game is that they didn't turn the ball over much at all.

Most teams would be happy with that kind of a number for a quarter.

Even as they were down, even as everything seemed to be going wrong from missing shots they've made throughout their winning streak to seemingly being without answer for Bonner, the Silver Stars stayed in the thing because they were still played rather exceptional team basketball. In the fourth quarter, due in part to getting out in the open floor, the Silver Stars ended up shooting 47.6% from the field, a testament to their composure and patience in continuing to execute despite challenges.

Adams' second half performance might epitomize that as a player who was assisted on the majority of her shots. Or perhaps Hammon's poise as a ball handler despite a 6-for-20 shooting night might also show that to some extent. But what what isn't really represented well in the box score is that the Silver Stars never really panicked despite suffering through a night on which things were going their way.

Even in the midst of an extended winning streak, there's sometimes more to learn about a team in close wins than in the blowouts that merely reinforce that they're good. The way that the Silver Stars fought through last night's deficit, perhaps less so than the fact that they overcame it, was representative of the type of basketball contenders have to play to win consistently. Every team is going to face adversity - sometimes against the unlikeliest of opponents in the most anomalous ways - but the best teams find ways to overcome it.

Average teams on a hot streak or the beneficiary of fortuitous scheduling don't do what the Silver Stars did last night; more often than not they fold, even the final margin is only a few possessions. The Silver Stars are starting to turn a corner where we have to consider them among the league's elite this season, if we hadn't already done so 4-5 games ago.

With a road trip coming up, they'll have ample opportunity to prove themselves.