It can be difficult to take much statistically from five exhibition games won by an average of 33.6 points per game.

Yet while Team USA was absolutely dominant for long stretches, they weren't perfect either - there were still signs that they have yet to play their best basketball. So after five games, here are five questions - or early observations - that might be interesting to watch during the games.

What is Team USA's biggest strength so far?

Defense is unquestionably the team's biggest strength so far and there's one thing that stands out as more significant than anything else.

The U.S. team held their five exhibition opponents to a 40.54% effective field goal percentage. Just to put that in perspective, albeit unfairly: the difference between the shooting efficiency of the U.S. (52.36%) and their opponents thus far is similar to the gap between the Minnesota Lynx (53.2%) and the Tulsa Shock (44.2%)...if the Shock had an off-day.

While their ability to force turnovers has been extremely impressive, they've been even more impressive in simply preventing opponents from putting the ball in the basket, something that can easily go unnoticed. A lot of that is simply having more size and strength than most of their opponents in the paint, which can easily push people to retreat to the perimeter. But when their pressure isn't creating turnovers for easy baskets, it's wasting time on the shot clock and making it difficult for opponents to execute their offense, which leads to bad shots.

And when you have players like Tina Charles/Sylvia Fowles or Angel McCoughtry coming off the bench, there's never much of a defensive letdown.

Is Team USA's own poor execution at times really a concern?

Two things that had to stand out for Team USA to almost anyone that watched the last couple of televised exhibition games were turnovers and a tendency to settle jumpers when not getting transition points.

Both of those things point to poor execution in the half court and both are things that we should probably expect to change as the team gets more familiar with one another. And with a team as committed to defense as they are, they will continue to create easy baskets for themselves while they find their rhythm offensively.

How much more can they get out of their post players?

Along with the tendency to settle for jumpers at times is that they aren't getting quite as much as we might expect from their post players, which is somewhat surprising.

The problem is not rebounding - Tina Charles leads the defensive boards with a team-high defensive rebounding percentage of 22.59%, Sylvia Fowles is dominating the offensive boards with a team-high offensive rebounding percentage of 21.58% and Candace Parker is second in both categories (22.09% and 13.74%, respectively). But what's surprising is the shooting efficiency of both Charles and Parker.

Charles was 13-for-30 from the field in exhibition play, which is not all that inspiring for someone that gets the majority of their scoring opportunities right around the basket. Parker is better at 19-for-41, but her true shooting is percentage of 49.90% is below what she has shot at any point in her career with the Los Angeles Sparks against WNBA competition. Asjha Jones hasn't played nearly as much, but has a team-low 2-point percentage of 36.84%, which is not particularly good for a power forward.

Obviously, a lot of that scoring inefficiency is a matter of players playing different roles, especially in the case of Parker - she's not the typical post player in that she normally has the ball in her hands a lot more often with the opportunity to create for herself and others; in this setting, she's not in that position quite as often because she's playing within a team concept. Yet regardless of the explanation, they've generally been playing against smaller defenders - either in terms of height or strength - and if anything were expected to improve, those shooting efficiency numbers from their post players might be near the top of the list.

Is there really any dropoff between point guards Sue Bird and Lindsay Whalen?

Doug Feinberg of the AP reported yesterday that Sue Bird finds it "amusing" when people refer to Asjha Jones or Lindsay Whalen as rookies at least in part due to the way women's basketball operates - most WNBA players play overseas during the offseason, meaning they've played most of the Olympic field already.

But somehow, there seems to be constant doubt about whether Whalen can effectively fill the point guard position run the team.

"When Lindsay has the ball and she's dribbling it, it's like she's always looking to move the chains. When she's pushing the ball up the floor, there are a lot of people getting out of her way," said Auriemma. "I wasn't sure whether or not she would have the respect of all of these great players because she's not Sue. She's not Diana [Taurasi]. She's not Tamika [Catchings]. She doesn't have that kind of reputation. But she's earned the respect of every one of these players and everyone on the coaching staff, for sure."

Auriemma's quote above illustrates that the question might not be which of these two point guards is better or worse, but how they bring two different things.

"Moving the chains" is a great way to describe what Whalen brings to the team - it's hard to imagine a player you'd rather give the ball in transition due to Whalen's ability to weave through defenses, pass, or score through contact so effectively. She has been the most efficient scorer of any guard on the team so far (63.71%), rebounds extremely well for a point guard and gets to the line at the third-highest rate of anyone on the team (37.83%). And she's leading the team in scoring too.

It's no knock on Bird to say that on a team that has struggled to execute at times and is relying heavily on transition scoring and early offense, that Whalen is a great fit for the team. And it's not like Bird has played poorly in her three games with the team anyway: while Whalen excels in transition, Bird has always been one of the best point guards in the world in half court situations showing unparalleled patience. In three games, she has led the team with an assist ratio of 56% and an astounding pure point rating of 13.66 along with an impressive true shooting percentage of 60%.

Which one of them is better for the team? It depends on what combination of players you have out there and what you want to accomplish more than anything else.

Who's the MVP of this team?

What makes this an interesting question is that Diana Taurasi tends to get a lot of attention from media types, but there are a number of other players that deserve more mainstream recognition.

But looking at these first five games statistically - in terms of the players' percentage of contributions to the team's overall statistical production - it looks like there might be a few other players who deserve top-billing. 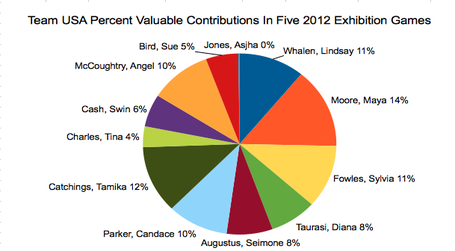 Maya Moore has had a particularly strong showing in exhibition play, perhaps surprisingly coming in second on the team in defensive rebounding percentage (22.36%), a team-low 11.22% turnover ratio (among players that played 5 games). But perhaps most impressive for Moore is her free throw rate: she's had a free throw rate of 27.27% over five games, which is above that of her rookie year (21.39%) and through the 19 games of her second season before the Olympic break (23.94%). Granted, there's a sample size issue here, but Moore is even more dangerous when she's attacking the basket and getting herself free throw attempts instead of settling for jumpers.

But it might not be as simple as designating Moore as the top player and, in fact, it would be nice to see some credit distributed to some other names on the world's largest sporting stage.

Given that the team is relying so heavily on their defense, Tamika Catchings deserves quite a bit of credit for their success. WNBA fans already know that Catchings can and will guard just about any position on the court and in their exhibitions thus far, her ability to pressure opposing ball handlers full court has been invaluable to their defensive attack. And while her impact might not show up in terms of scoring, it does show up in other ways: her 8.25% steal percentage would be considered ridiculous were it not for McCoughtry's 12.46% steal percentage, which is truly insane (5% is normally considered elite). Catchings might not stand out in any particular statistical category aside from steals, but her ability to do all the little things has been a significant part of Team USA's success.

And there are other players who deserve more attention for what they've done as well. Fowles has had an extremely impressive run on paper, leading the U.S. team in offensive rebounding percentage (21.58%), true shooting percentage (74.01%), and free throw rate (58.62%). Whalen's ability to lead the team's dangerous transition attack has been essential, as described above.

But what really stands out when looking at the numbers - even as dominant as some of them are - is that the team is still extremely balanced. Even WNBA teams like the Minnesota Lynx or San Antonio Silver Stars aren't quite this balanced in that nobody is responsible for more than 15% of their production and all but two players have contributed 5% or above.

Ultimately, this is an extremely well-constructed basketball team and the scariest part is that there's no way we've seen their best basketball yet.

For a briefer synopsis of Team USA, check out Jessica Lantz' team capsule. Click here for a look at the full roster.