After the starters got Team USA off to a sluggish start, Moore came off the bench to score 14 of her team-high 18 points in the first half to give the team a jolt and help them to a 47-32 first half lead. Yet as valuable as her scoring was, her passing also stood out.

Although Moore tied Tamika Catchings and Lindsay Whalen for a team-high 5 assists, she was arguably the most efficient statistically by pure point rating.

Top 3 pure point ratings for Team USA vs. Great Britain on 7/18/12 (with minutes rounded to the nearest whole).

Bear in mind that all of those are extraordinarily high pure point ratings for two reasons: there was only one turnover between them and all three of them created a very high rate of assists given the minutes they played. So Moore gets the edge over the other two according to pure point rating because she didn't have a turnover and played about a minute and a half less than Catchings.

However, I said "arguably" more efficient because of the way each of these players got their assists. We can debate how much value should be attributed to a given type assist - and other people have already taken a stab at that - but that is something that stands out when comparing the assists these three players got yesterday, for whatever it's worth (and for the sake of simplicity, let's ignore the subjective nature of what constitutes an assist and go with what was recorded).

Moore got all five of her assists on fast break layups, which is not to dismiss her production but to say that she got every one in a situation where the offense had an advantage against a defense that wasn't set.

In contrast, Catchings and Whalen did more to create scoring opportunities for players against set defenses either off the drive or recognizing a gap. I'll set aside the discussion of which player had the best game as a distributor for now, but it does provide some room to highlight Catchings' performance despite 1-for-7 shooting.

In addition to Catchings' efficient passing, her 6 rebounds - 3 of which were offensive - and 4 steals were each one short of tying a game-high. Although she wasn't particularly efficient as a scorer, she did so many other things well that she managed to stand out statistically (at least in terms of Marginal Victories Produced).

But as usual, Catchings value also goes well beyond statistics.

On many plays in the first two games, Catchings has been pressuring the ball handler full court after made baskets. When it doesn't result in steals, it results in running the shot clock down. And almost anywhere on the court, her pressure can force opposing point guards into bad decisions.

Catchings' defensive intensity was complemented by that of Angel McCoughtry who had a game-high 5 steals, primarily in half court situations where her quickness and active hands forced opposing players to cough the ball up. That combination alone helped to keep the U.S. in control of the game after their poor start, but five U.S. players had 3 or more steals to contribute to Team GB's 27 turnovers which resulted in 32 Team USA points.

Overall, there were quite a few positives to take away from Team USA's performance yesterday. But they also had a similar problem. 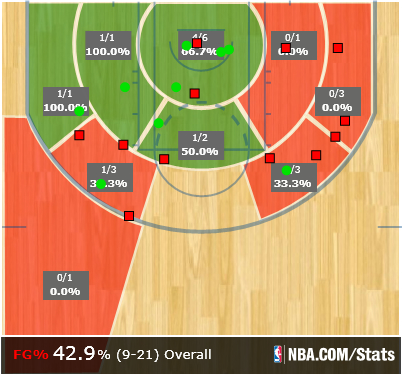 Once again, Team USA was taking a lot of jumpers when they weren't getting out in transition.

Of those 4 made shots in the paint, only one came from a half court set. Both of those made shots above near the painted area came in transition or what you might call "early offense".

If you take away their 11 fast break points, Team USA was 4-for-16 when forced to play in the halfcourt again, primarily due to that tendency to look for jumpers.

In short, Team USA's defense is not just "fueling their offense", as the saying goes; at times, they're living almost entirely on the strength of their defense to create transition baskets for themselves. What we've learned so far is that they're going to struggle beating teams that way. And that's part of what made the passing efficiency of the players above so important: on a day when they couldn't create offense all that efficiently, having players that could create opportunities for others became even more important.

On the flip side, their first quarter defense wasn't particularly stellar in the first half either.

Team USA seemed to be allowing a ton of open looks in the first quarter and Johannah Leedham was a primary beneficiary, scoring 7 of her 20 points in the first period on two uncontested shots and a driving layup from the left wing.

Team GB shot about 45% in the first quarter as Team USA struggled to find their rhythm early, but a combination of closing out on shooters more effectively (27.8% in the second quarter) and forcing turnovers (Team GB had 11 turnovers in the third quarter) helped the U.S. maintain control of the game after getting down early.

Just looking at the scoring flow of the game, this was a wake up call for the U.S. simply because they dug themselves a hole early. However, the primary problem for Team USA was the same in both games: their offensive chemistry is still not there yet.