For people that doubted whether the USA women's basketball team could be successful in Sue Bird's absence, Lindsay Whalen's performance yesterday might have helped to accentuate the point that Hartford Courant reporter John Altavilla made in the lede of his game recap: "The depth of USA women's basketball is its greatest weapon."

Whalen performed quite well as the team's starting point guard, leading the way for Team USA with a game-high 21 points to go along with 5 rebounds and 5 assists in a 99-67 rout of Brazil.

Set aside the outstanding court vision and passing that make her among the best point guards in the world in transition. She rebounds extremely well for a guard, she's not afraid of scoring through contact, and - the thing that was most on display last night - she navigates the court decisively, quickly getting to spots that make her a scoring threat even if she's not the fastest player on the floor. It's a beautiful thing to watch.

And that was particularly impressive yesterday as she earned 7 free throw attempts (a free throw rate of 58.33%) as she simply found spots off the dribble or off cuts and muscled her way past opponents.

Yet for those of us who already appreciate Whalen's ability, the team's depth was probably obvious before hand simply because the roster features 12 players who have at least one WNBA All-Star appearance on their resume. Either way, it was on full display last night, whether it be Tina Charles' double-double off the bench, Angel McCoughtry playing sparingly but attempting a dunk with under a minute left, or a characteristically efficient mid-range game from Seimone Augustus.

Augustus is a player that always provides reasons to be highlighted and last night it was a simple matter of efficiency. Other players had gaudier numbers or perhaps bigger plays, but Augustus just did her thing: knocking down mid-range shots - three from the right baseline against Brazil.

Yet, as Altavilla also points out, for all that depth on display the U.S. was by no means perfect last night. They were dominant in that they blew out their opponent, but that doesn't mean we shouldn't expect more from them ahead.

Outstanding shooting from Augustus and Diana Taurasi (4-for-7 from 3-point range) was essential considering that the U.S. appeared to struggle to work the ball inside despite having arguably two of the best low-post scorers in the world the outside shooting of players like Augustus - Charles, Sylvia Fowles, and Candace Parker combined to shoot 8-for-23 from the field (and if you omit Parker's three perimeter shots, you're still talking about 7-for-20), which is not exactly efficient post scoring.

The U.S. really just seemed to struggle establishing their posts in the paint, whether going up against Brazilian center Erika de Souza or against other active defenders.

Key statistic: USA held Brazil to 31.9% shooting from the field 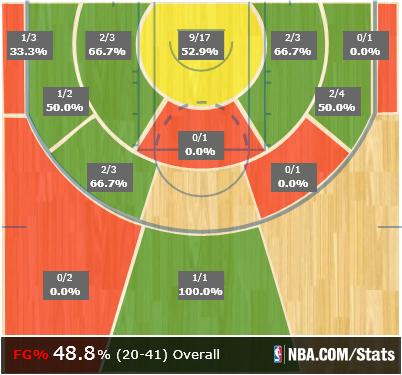 Although the U.S. shot a satisfactory percentage in the paint in the first half just based on attempts, you have to consider that they had 13 points off fast break opportunities. Drop those from their attempts around the basket and they shot 3-for-11 in the post in a half that nearly every report will tell you they dominated.

And that doesn't even include turnovers trying to get the ball to the post and other plays where poor positioning prevented a clean lane to even pass it to the post.

What really helped the U.S. in the first half was their mid-range shooting: they shot an impressive 9-17 (52.9%) from the mid-range in the first half to help build that 20-point lead despite poor play in the post. In other words, they built that 20-point first half lead primarily on the strength of forcing turnovers (they forced 12 turnovers for 15 points in the first half) and shooting jumpers. Despite the claims that the game was never really a contest after the first few minutes, Brazil was down a manageable 14 points about halfway through the second quarter; although the U.S.A. moved the ball relatively well, they weren't particularly great in their half court offense in the first half at all. 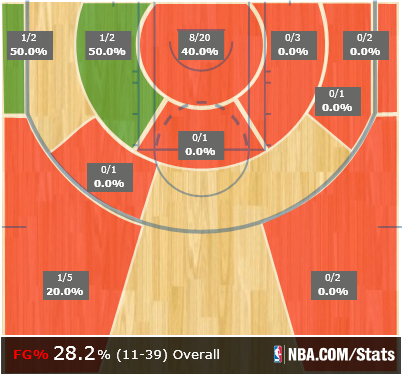 Similar to the U.S., Brazil's performance in the post wasn't all that great once you subtract fast break points: 5-for-17 (29.41%) isn't a whole lot better than their opponents. And the U.S. should be credited for post defense as well as the pressure on the perimeter that denied passes and penetration. In a game that essentially amounted to a mid-range shooting contest early on, Brazil failed to keep up and the U.S. just outshot them in the first half and cruised in the second.

But a lot of those first half shots in the paint for Brazil came off of offensive rebounds that they simply didn't convert with forward Clarissa Dos Santos epitomizing the pattern: she had seven offensive boards for Brazil yet shot 2-for-10. As bad as it was that the U.S. gave up that many offensive boards to one player, the way they gave them up was probably more problematic - Dos Santos hardly had to fight for those boards.

Whether it was in transition, in half court sets, or a free throw, the U.S. just had a hard time finding her, getting a body on her, and outworking her for the rebound. We can debate whether this is indicative of a long-term problem and their second half performance would suggest that it isn't - they both won the offensive rebounding battle (6-5) and held Dos Santos to only 1 offensive board. It should be noted that excellent recovery speed from the U.S. affected all of Dos Santos' putbacks, but ultimately if Brazil Dos Santos had been even moderately more efficient at converting those second chance opportunities it could've been a single digit game; not bad for a team that was 0-for-the-right-side-of-the-perimeter in the first half.

Those post scoring and rebounding struggles were compounded by a pronounced turnover problem.

While Brazil struggled to find high quality scoring opportunities and failed to capitalize on the ones they got, Brazil got a huge spark from Karla Costa off the bench who had 3 of her game-high 5 steals in the second quarter to help keep that deficit manageable. After cleanly picking Taurasi on one possession, she caught Parker off guard dribbling around the 3-point line on the next to get another fast break opportunity.

And things only got worse for the U.S. in the third quarter, which Brazil actually only lost by four points: the U.S. had 10 turnovers for 9 points in the third period. In fact, Seimone Augustus stood out statistically because she was the only player to play significant minutes who managed not to turn the ball over.

With the turnovers - which stood out more than some of the other things because some of them were questionable decisions - you could easily say that they'll work those out as they play together more often. Throwing the ball out of bounds while trying to get it to the post can be as much about trying to get a feel for teammates as anything else.

Still, the combination of problems throughout the game for the U.S. - post scoring, rebounding, and turnovers - does suggest that this game wasn't quite as easy as the score makes it look.

The USA women's basketball team was dominant against Brazil, but not particularly great. It will be interesting to see how much they improve before the actual games begin.

For more thoughts on this game, you can see the raw notes that I typed out while I was watching. For more coverage of the Olympics in general, check out SBN's Olympic basketball hub.