The group stage has been completed in Ankara, Turkey as all 12 tournament teams played two games against the foes in their group. The top two teams in each group survived to advance to the knockout round, which will be played on Friday. The winners of this quarterfinal round will be assured a spot in the Olympics. The fifth and final spot available in the London 2012 field will be awarded to the tournament 'winner'. (If you notice, unlike traditional bracketing, the 'semifinals' are actually the quarterfinal losers.) 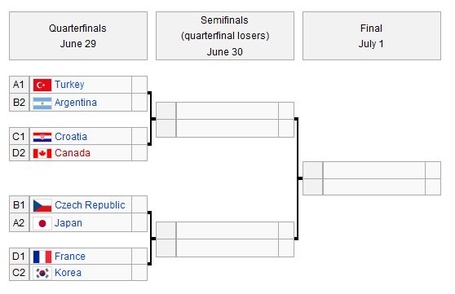 You've seen Day 1 and Day 2 results, so here's the skinny on what happened on Day 3:

Group A - Japan edged Puerto Rico 79-70 to take the second qualifying spot in the group. The name of the game belonged to Yuka Mamiya, who dropped in 29 points and scooped up 15 rebounds for Japan in the win.

Group B - This game was purely for seeding as the fate of the Czech Republic and Argentina was already known, and the Czechs came away with a 68-54 win to take top honors in their group. Petra Kulichova led the way with 13 points and 20 rebounds. The score, while not terribly lopsided but also not giving the appearance of a squeaker doesn't tell the total tale. Czech Republic took a 54-33 lead into the final quarter.

Group C - Another game solely for seeding, Croatia beat Korea 83-75. The game's top scorer was Croatia's Marin Vrsaljko who finished with 26 points and seven rebounds in the win.

Group D - Poor, poor Mali. After getting drubbed by Canada in the first day of competition 89-23, they followed that game up with a 87-33 affair with France. Mali was outscored 28-5 in the third quarter as both FIBA Africa qualifying teams (Mali and Mozambique) headed for an early exit. For France, Nwal-Endine Miyem contributed 17 points and 10 rebounds in the victorious effort.