Share All sharing options for: Tulsa Shocks The Sparks In 91-75 Win

After Tuesday's game with the Los Angeles Sparks (10-5), Tulsa Shock head coach, Gary Kloppenburg, said of his rookie guard, "She's one of those players that we kind of ride it when she gets hot. She is one of those microwave-type scorers. So when she gets going like that you try to keep her in a lot of different plays where she's going to the rim."

That rookie guard Klop is referring to? None other than Riquna Williams, who led all scorers Tuesday night with a career-high 27 points in Tulsa's resounding 91-75 victory. She also finished with two rebounds and an assist in a contest that nearly became an all-out routing of the Sparks.

At the half, Tulsa was shooting 80% (4-of-5) from the free throw line, and a particularly stunning 51% (21-of-41) from the field. This hot-handed half gave the Shock the early advantage over L.A. which never diminished as the game progressed. Tulsa owned an astounding 48-25 halftime lead and even after a late-game push from the Sparks, the Shock had this one in the books early. After grabbing the 6-5 lead on a Latta jumpshot with 7:17 to play in the first quarter, Tulsa never trailed. 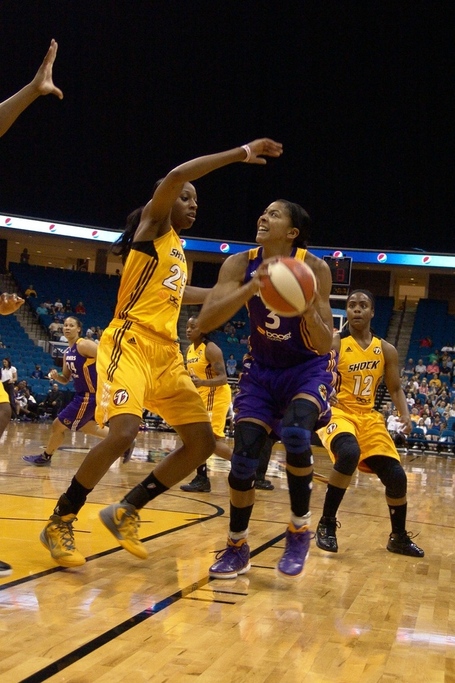 Another standout performance for Tulsa on Tuesday came from fellow Shock rookie, Glory Johnson. Johnson finished with a respectable nine points, but what stood out to anyone who was lucky enough to watch the game was Johnson's defense. Kloppenburg said of the Shock's D on the whole, "We wanted to play physical defense. Make life hard - as difficult as we could."

Johnson's "difficult" defense held L.A.'s Candace Parker to just two points ... for the entire game. In contrast, the last meeting between L.A. and Tulsa was on June 20 and Parker dropped a cool 33 points on the Shock in Los Angeles.

The Sparks' shots began to fall in the final quarter, which was the only quarter that LA won, besting Tulsa 28-19 in the period. Kristi Toliver led Los Angeles with 21 points and seven assists, and rookies Nneka Ogwumike and April Sykes also reached double-digits for the Sparks. But with three other Shock players scoring double digits behind Williams' 27 - Latta had 21, Temeka Johnson and Amber Holt both had 11 - a Sparks comeback wasn't happening.

Next up on Friday, the Shock host Atlanta, for the L.A. Sparks, they go to San Antonio on Saturday morning. These two Western Conference foes will meet for the last time this season on Aug. 30, and L.A. coach Carol Ross uttered some words about the future that haven't been heard too often regarding Tulsa - until now.

"Fortunately, I've got a little while to think about [next game]," Ross said. "Clearly, we have to play better. We can't let (Tulsa) take over the court, which I thought they did. I think we see them after the break, so we've got some time to make my team better."

Tulsa's largest lead was 27 points. This sets not only a new season-high for the Shock, but is also the largest lead the club has achieved since making the move to T-Town in 2010.

Delisha Milton-Jones reached the career 5,000 point club in the loss.