14 players from the 2012 draft have appeared in games this season. That is an extraordinarily low number. If it holds for the remainder of the season, it would mark both the smallest number of draftees to appear the year they were drafted and the lowest percentage of draftees to appear.

Everyone knew a year ago or more that the 2012 draft was weak. Unless Brittney Griner or Elena Delle Donne came out early, there was very little incentive for teams to hang on to first round picks. Even so, the low appearance rate of this draft is staggering. 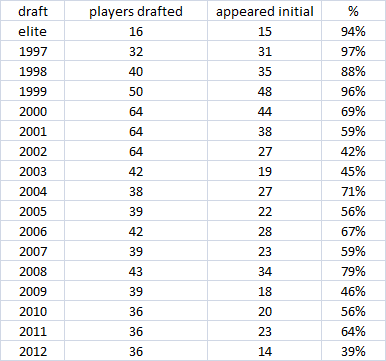 That isn't really a fair comparison. The league had more teams for much of its history and the first few seasons teams had to fill their rosters with draftees, to say nothing of the draft running four rounds through 2002. Teams in 1999 averaged four draftees per roster. That isn't even possible today. 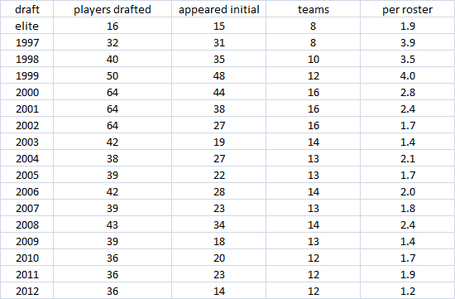 Percentage of draftees was mentioned earlier. 39% of 2012 draftees are on rosters. That would be a record low. Currently the 2002 draft, the last one to feature four rounds, holds that distinction with 42% of its draftees appearing that year. 2003 is the only other season in which fewer than half of the draftees appeared.

The phrase appearing that year is an important distinction, as there are almost always draftees that do not appear until a later season. Sometimes it is an injury situation. Tamika Catchings, for example, was drafted in 2001 but did not appear until the following season. Sometimes foreign players are drafted with the team knowing they will not appear until a later season. Astan Dabo and Damiris Dantas were selected this year with that expectation. Most often, however, a player needs to gain some experience and improve her game before she is ready to play in the W. Alysha Clark, who made her league debut with Seattle this season, was originally drafted in 2010. Some players take several years before finally making it. The longest any player has taken to debut after being drafted was Marion Jones, who was taken in the third round of the 2003 draft but did not appear until 2010. So far only the two 1997 drafts, the 2000 draft, and the 2011 draft have not had a player make a later debut. 2011 still has plenty of time to get off of this list. The 2002 draft is the only one to have fewer than half of its draftees appear at some point. 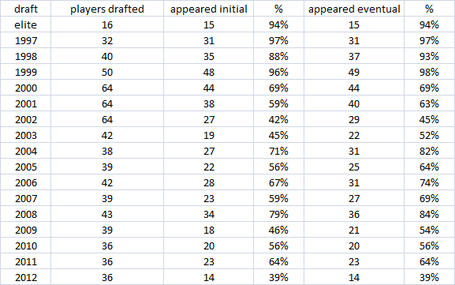 There are other ways to measure draft depth. We could look at how many 1000 point scorers a draft has, for example. That takes a long time to measure however. Players have taken as long as nine seasons to reach that milestone. Some people like to look at award counts. That really tells more about the quality of the high end of the draft than about depth. The 2005 draft has had no All WNBA mentions, but is unusually deep in contributing players.

We could adapt the Barnwell System for this purpose. If we assume that a contributor, someone who plays regularly but does not start much, will produce 80 points of value (prorated for earlier seasons due to the shorter schedule), we see that the average draft through 2007 has 12.1 such players. 1999 blows the top off the scale, of course, as 30 players from that draft qualify as contributors. If we take 1999 out, the average drops to 10.3 . This seems to be minimally affected by the fluctuations in league size. The three drafts that occurred when the league was at 16 teams average 11.3 contributors per class. By this method we see the depth of the 2005 draft, which had 15 contributors. Only 1999 and 2001 (with 17) had more. The 2006 draft, in contrast, has great talent at the top but very little depth. Six draftees from that class qualify as contributors. This method does not tell us anything about more recent classes, but it seems clear that if only 14 draftees appear it is very unlikely 10 or more will become contributors. 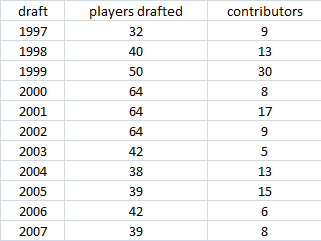 Whatever method we use, it is apparent that the 2012 draft is not deep. It is possible that the class might surprise everyone and turn into a great one, but the early returns are not at all promising.