Troy Littledeer was on hand at the BOK Center Saturday as the Tulsa Shock started on a tear and finished with a fizzle as they fell to the defending champions from Minnesota, 93-73. With the victory, the Lynx continue to ride a 12-game winning streak that dates back to last season, a franchise record. Their 9-0 start to the 2012 campaign ties a WNBA record.

Thanks to Troy for sharing some scenes captured at the game. 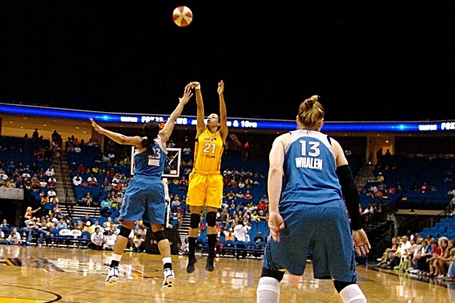 Jennifer Lacy has been an offensive force for the Tulsa Shock this season. Saturday, she finished with a team-high 15 points, including a 4-of-7 effort from 3-point range.

"We've got to stick together. We've got to help each other - play for each other. We have to want to beat the team more than anything. We have to cut down on the errors that we make at the end of the game and learn how to close out games." - Lacy on leading a young team through the season 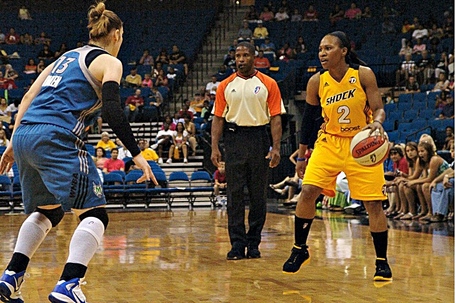 Temeka Johnson's veteran presence at the point has been a welcome addition to the team. She went for 14 points and added six assists against the Lynx. Pictured with Johnson is Minnesota's Lindsay Whalen, who finished with 10 dimes and eight points in the game.

"You've got to tip your hat to that. I just finished telling them the trophy is over there. They have something that everybody wants and they're also trying to keep it. You have to respect the talent that they have and they played well without one of their top players. Minnesota is a very talented team. We need to keep chipping away to figure out a way to get our W." - Johnson on the game 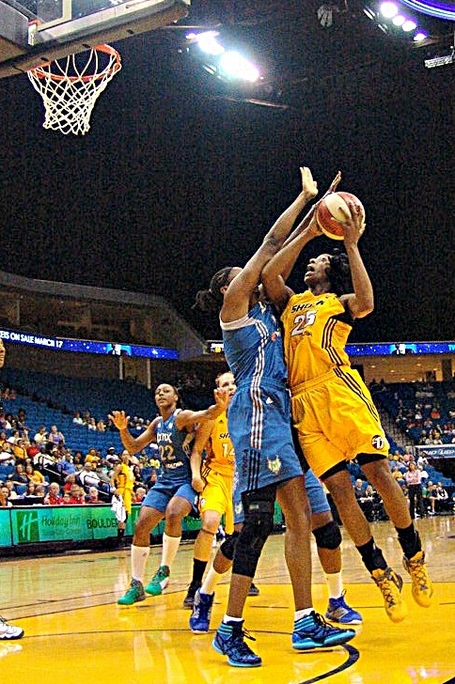 Another Johnson - rookie Glory - has been hustling for the Shock this year as well. So far, she's averaged 8.6 points, 4.6 rebounds and 2.1 steals a game in her first year for the club. Her 51.2% field goal percentage leads the team. 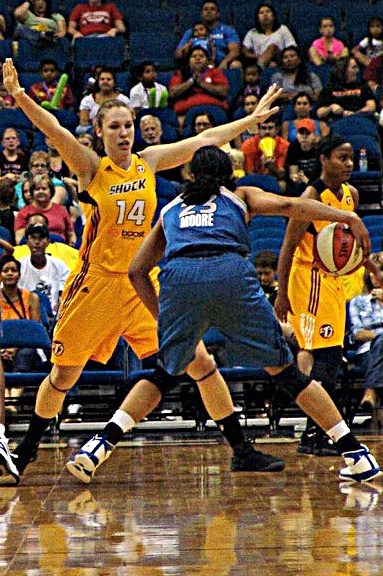 Kayla Pedersen has been struggling mightily on the offensive side of the ball in the early stages of the 2012 season, but found a way to career-high the Lynx with 10 rebounds on Saturday. Here, she has a go at guarding Maya Moore. Moore was sensational in Saturday's contest against the Shock, pouring in a season-high 26 points including 14 in the third quarter.

"This was a fun game for Maya. I thought she was poised, but yet she was aggressive and took some tough shots. She missed some easy ones, but made some tough ones and I think all in all, offensively she was really good for us." - Lynx coach Cheryl Reeve on Moore's performance 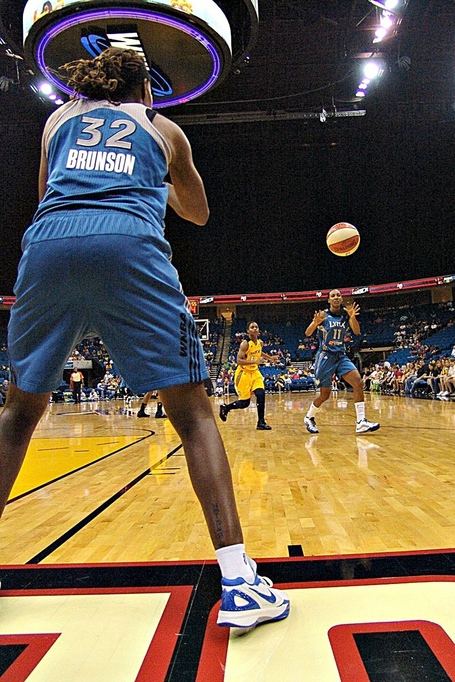 Rebekkah Brunson added 15 points and six rebounds for the Lynx in the win. Candice Wiggins, receiving the ball from Brunson on the inbounds play, finished with 11 points off the bench. The rest of the Minnesota bench only contributed four points. One category the Shock dominated in this game was bench production, a 34-15 margin in favor of Tulsa.