The "apprehension on offense and defensive lapses" described by Terrence Thomas of the San Antonio Express-News in recapping the San Antonio Silver Stars' 77-63 loss to the Chicago Sky last night was probably most evident during a poorly played second quarter.

Five of their six turnovers during the second period were bad passes by a team that has been known for it's exemplary chemistry and ability to win as a cohesive unit. The sixth turnover came when rookie Shenise Johnson stepped out of bounds on a baseline drive in the face of smothering defense by Chicago's Shay Murphy. Unable to find the rhythm that normally makes them successful, they shot a game-low 27.8% from the field and allowed the Sky to mount a 13-point lead while they struggled to find answers for anything the Sky were doing.

As Thomas alludes to, it's not the way fans are used to seeing the Silver Stars open the season at home and the biggest problem offensively last night was probably shot selection as much as conversion.

"Their height did bother us a little bit," said Silver Stars guard Jia Perkins after the game. "But at the same time we should be able to go around them. We're professionals. If somebody is taller than you, we're quicker. We should be able to go around and penetrate and either kick, penetrate, or finish the shot. But I think we got kind of rattled. I know myself, I settled for outside shots instead of attacking a lot. But we have to learn and move forward."

Where that problem of settling for jumpers most immediately shows up in the boxscore is in free throw attempts - the Silver Stars only got to the 13 times in last night's game for a low free throw rate of 20%, significantly beneath the 28% they posted last season with a similar roster. Sophia Young mentioned the lack of free throw attempts as a sign of lacking aggression offensively.

"We didn't get to the line that much tonight," said Young, who had a quiet night with 9 points and 3 rebounds. "I think I only got to the line one time and that's something that I have to pick up."

But the problem of settling for jumpers was also evident in their shot charts and, perhaps surprisingly, moreso in the third quarter when they had a 60% effective field goal percentage - the highest shooting efficiency of any quarter in the game last night - on the strength of 4-for-10 3-point shooting. 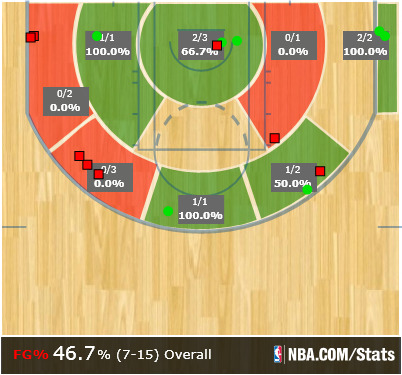 Third quarter shot chart for the San Antonio Silver Stars vs. the Chicago Sky on 5/30/12.

Bearing in mind that the 3-point line on these shot charts is set at NBA distance, what should be evident is that the Silver Stars hardly even went near the paint in the third quarter. They actually attempted to go inside more often in the second quarter - their four live turnovers were attempts to pass the ball into the paint - but simply struggled to convert with the Sky's height inside. They relied extremely heavily on long jumpers to score in the third quarter, with only 20% of their shot attempts coming in the paint.

Yes, they made those shots in the third quarter, but they went cold once again in the fourth quarter and the Sky ultimately won going away.

Unfortunately, this isn't a new problem - the Silver Stars averaged the least points in the paint in the WNBA last season (29.53), which illustrates a similar tendency to rely heavily on jumpers (particularly in losses). What has made the Silver Stars a successful team in the past few years is their ability to drive kick and find high-percentage shooting opportunities, even if they struggled to score inside. But with the Sky's defense creating apprehension offensively, the Silver Stars started to get a little bit too comfortable on the perimeter and couldn't find answers once the shots stopped falling.

Despite the shooting woes for the team as a whole, Hammon scored a team-high 21 points on 10-for-13 shooting, which was good for an outstanding true shooting percentage of 91.78%. The problem is that she was the Silver Stars' offense in the third quarter: take away her three 3-pointers, and the rest of the team shot 4-for-12 (33.33%).

Fowles is off to yet another MVP-caliber start and, as Thomas said in his article, the Silver Stars simply had no answer for her in the post. One big difference: the Sky are clearly looking to go inside to her this season, which has to be a welcome sight for fans.

If you recall, MVP candidates are often in the 15+ Marginal Victories Produced range, making Fowles' performance last night quite a MVP resume-builder.