L.A. Sparks 76, Tulsa Shock 75: The Value Of Rookie Riquna Williams' Ability To Create Her Own Shots

Share All sharing options for: L.A. Sparks 76, Tulsa Shock 75: The Value Of Rookie Riquna Williams' Ability To Create Her Own Shots

Were it not for Kristi Toliver's game-winning three to lift the Los Angeles Sparks to a 76-75 win, all the spotlight would be on rookie Riquna Williams' effort to earn the Shock their first win.

Williams worked wonders for the Shock last night in scoring a career-high 19 points, using her quickness to breakdown Los Angeles Sparks' defense in halfcourt sets and transition as well as demonstrating the ability to create her own shot against a defense that at times looked disinterested. Although there's the easy narrative of saying she should have been drafted higher, perhaps the more significant thing is that she got drafted to the right team - the Shock were a team that desperately needed perimeter scoring of any type last season and Williams offers exactly that.

Unfortunately, despite Williams' performance last night, poor shooting is ultimately what did the Shock in and, more specifically, where they were getting those shots.

Obviously, two missed free throws at the end of the game loomed large.

Yet while free throws literally would've saved the Shock from last night's painful defeat, they'll remain in survival mode until they shoot better than the 36.2% they shot from the field last night or the 37.3% they've shot during this young season. And Williams did appear to be part of the answer.

The Shock did go from shooting 30% in the first half to 44.8% in the second half, partially on the strength of Williams' performance - she shot 4-for-8 in both halves - but also due to outstanding shooting as a team in the third quarter when they assumed a lead.

Shooting percentages by quarter for the Shock and Sparks on 5/29/12.

The poor first quarter shooting is almost entirely due to a cold start in which the Shock got down 11-0, missing a combination of layups, short range jumpers, and longer shots. But the contrast between the third and fourth quarter is interesting and perhaps instructive for the Shock moving forward.

To start with the positives, the Shock did move the ball fairly well in the fourth quarter, with 8 of their 12 shots being "€œassisted"€ - as in, an assist would have been awarded had the shot gone down - and two of those unassisted opportunities coming on a single possession. The third unassisted attempt didn't come until Williams' step back three with under two minutes left.

Perhaps that sounds like relatively good basketball -€“ and Shock point guard Temeka Johnson deserves a ton of credit for it - in that they were moving the ball and working together to get shots. However, that Williams was the only player to make an unassisted shot in the fourth quarter is a problem -€“ they almost relied too much on ball movement to get shots in the fourth quarter and were getting the best shots.

Nearly half of the Shock's fourth quarter shots were threes and the only layup attempt was blocked; in the third quarter, only three of their 17 shots were from beyond the arc and just over half were right around the rim. 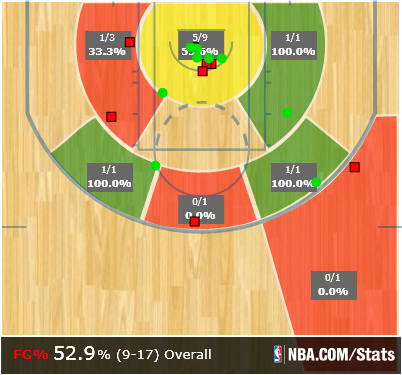 Third quarter shot chart for the Tulsa Shock against the L.A. Sparks on 5/30/12. 3-point line shown is NBA distance.

Perhaps it comes as little surprise that Williams was responsible for 4 of those 9 attempts right around the basket, including two that came in transition. Although the whole team was finding ways to create shots around the basket, Williams' ability to create off the dribble - whether it was getting to the basket or even gaining separation to get shots - was essential to the Shock taking a 5-point lead near the end of the third.

Part of their success in the third quarter was certainly their defense as a number of live ball turnovers by the Sparks led to transition opportunities; likewise, perhaps the Sparks' ability to control the ball a tad better and settle into their halfcourt defense more easily was a factor as well - they shot 58.3% from the field in the fourth quarter. But it's hard to ignore the scoring impact of Williams given that she played 10 minutes in the third and only a bit above 3 in the fourth.

We already know the Shock rely heavily on turnovers and transition scoring to create offense. But, as mentioned in the power rankings yesterday, the thing that's holding them back right now is their shooting efficiency and last night's game was a clear example of that. It's what made ranking them a difficult task: they're doing an outstanding job of forcing turnovers, but they're shooting so much less efficiently than their opponents that they can cash in with wins.

As heartbreaking as that buzzer-beating shot from Toliver must have been for the Shock, that doesn't fully explain why they lost the game - the Shock have to find ways to create those scoring opportunities Williams gets when she is not in the game.

Toliver will get a ton of credit for the win and was a great redemption story, DeLisha Milton-Jones shared the scoring lead with Toliver with 16 points, and Candace Parker got another double-double, but there's a reason why rookie Nneka Ogwumike was +21 last night. As the Sparks battled to get back into the game late in the second half, Ogwumike did a little bit of everything â€“ including bringing the ball upcourt in transition once - to help the Sparks win. There was a point when it looked like the Sparks should've just cleared out and gotten the ball to her on every play. But that's hard to do with a rookie power forward when you're turning the ball over on nearly a third of your possessions.

One way that it looks like the Sparks will have to look to in order to become a more efficient playmaking team is using Candace Parker as a lead ball handler. They did it in the second half last night as Toliver struggled through a WNBA-record 14 turnovers, but it's clear â€“ even from previous games â€“ that the team runs more efficiently when they have someone aside from Parker to run the offense. Alana Beard is another option and so is April Sykes, but with Beard in foul trouble and Sykes only playing 8 minutes they were left with a playmaking void and the turnovers and erratic offense almost got them beat.