The Los Angeles Sparks began the 2011 season on a high note, essentially picking up from where they left off in August 2010.

Candace Parker was back from injury, the bench was extremely productive in taking out the defending champion Seattle Storm, and they were sharing the ball extremely well even as Parker was looking like an early-season MVP candidate statistically.

Then Parker went down with an injury once again and so began the Sparks' path to a disappointing end to the season.

If you're looking to reduce the Sparks' struggles last season to a single simple explanation - or even a single moment - you could revisit an excruciating first half of a 93-77 loss to the Phoenix Mercury late last season. It only ceased being excruciating in the second half because the outcome of the game ceased to be be in doubt.

After an impressive 12-2 start to the game, the Sparks simply looked disinterested in playing any sort of reasonable defense and began allowing far the Mercury to get uncontested layups and easy second chance opportunities off offensive boards. But the game itself didn't exactly provide much new insight about the Sparks: defense was their problem all season.

You can see where the defensive struggles showed up in the Sparks' Four Factors numbers: they were the worst defensive rebounding team in the league, which led to allowing opponents the second-most second chance points. They didn't force a lot of turnovers and allowed the second most points off turnovers in the league.

In short, this was a team that was capable of scoring - they had the fourth-best offensive rating in the league last season. The problem was that they threw away possessions more often than their opponents while allowing their opponent far too many opportunities to extend their possessions with offensive rebounds. 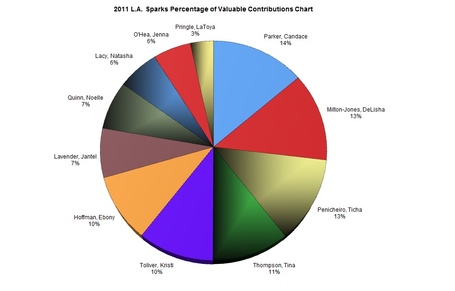 Despite all their defensive struggles, the most significant loss statistically was the departure of Ticha Penicheiro who signed with the Chicago Sky as a free agent. In broad terms, Penicheiro was the third most valuable player to the Sparks' overall statistical production last season in large part because she was responsible for creating so many scoring opportunities while on the floor.

Although the rebounding was clearly the most significant concern last season, the ball handling situation became even more dire with Penicheiro departing. So as much as Alana Beard's signing was significant for her defensive prowess, she also has the capacity to help relieve the pressure on some of the team's ball handlers.

As described at the time of her signing, Beard's numbers with the Washington Mystics suggest that she was asked to carry too heavy a burden as ball handler, scorer, and top defender; the Sparks should be able to find ways to score meaning Beard can really operate within the flow of the offense instead of being the focal point for everything. But with the questions about their point guard situation, they will need multiple players to step up as efficient distributors as they got early last season. And if Beard can even be a moderately efficient ball handler (a pure point rating above zero), the Sparks' ball handling troubles will be considerably mitigated.

There has been plenty written about Nneka Ogwumike already and you can read more here about her prospects for WNBA success. But third round pick April Sykes might have surprised some people in making the roster ahead of a couple more heralded players.

Coming out of Rutgers, it might be fair to expect that Sykes will help with the Sparks' perimeter defense. But in terms of their other needs - distributors and rebounders - it wasn't immediately clear that Sykes would fit. Sykes was more of a volume scorer in college (27.81%) and an inefficient ball handler (-5.14). To her credit, it's not unusual for high usage college scorers to become more efficient ball handlers in the WNBA; on a team like the Sparks, Sykes probably won't be relied upon quite as heavily as a scorer which means her touches will go down and, with that, her turnover ratio should decline.

But what was a bigger concern was the combination of an unspectacular college 3-point percentage (29.4%) and an extremely low free throw production rate. Sykes' college numbers suggest that she would become a pure scorer in the pros - she's among the top 15% purest scorers to come out for the WNBA Draft since 2008 - and at 6'0" she's in a better position to pull that off than many other college scorers that have attempted to make the transition. The question might be whether a player who produced so little at the free throw line and wasn't that impressive from the 3-point line will be a versatile enough scorer to succeed at the pro level. Moreover, on a team that had a turnover problem and lost their point guard, it's reasonable to wonder whether they can afford to have an inefficient ball handler on the floor.

It might seem weird to list Sharnee Zoll as a "breakout" player, but she's been in WNBA training camps before and hasn't made much of an impact. This season, Zoll will have every opportunity in the world to become a solid contributor for the Sparks and her preseason performance - even if those games are meaningless - suggest that she's ready to fill some minutes at point guard.

And again, if the Sparks can distribute ball handling responsibilities between a number of players (Beard, Parker, Kristi Toliver) as they did early last season, Zoll won't need to be the flashy playmaking distributor the Sparks have had previously; the key for a point guard playing with the Sparks this season is that the team could play such that they don't need to rely entirely on the point guard to run their offense. They don't necessarily need a dynamic, high usage distributor; all Zoll might have to be is a low usage initiator that brings the ball up the court and avoids making mistakes.

Will Zoll set the world on fire? Maybe not. But what they need is a serviceable player at point who can get the ball across half court and initiate their offense. Zoll has a chance to do that and be a contributor.

The Sparks addressed two of their biggest needs this off-season - defense and rebounding - head on and even if they continue to turn the ball over at a higher rate than their opponents, filling those two big gaps will help them significantly.

For a look at all these statistics for the Sparks, click here.