Seattle Storm point guard Sue Bird's argument for the 2011 WNBA MVP award was pretty clear: it's hard to imagine the Storm being close to playoff contention last season without their star point guard.

With star center Lauren Jackson out for more than half the season due to injury, there were few players in the league who were responsible for a larger percentage of their team's statistical output than Bird. But from that emerged another problem for the dominant 2010 WNBA champions.

2011 Four Factors for the Seattle Storm

The Storm's defense was solid throughout the season and helped them stay in games by making it hard for opponents to score. They held teams to lowest points per possession in the league and the lowest shooting efficiency in the Western Conference.

The problem was that with early-season shooting struggles and Bird getting little help offensively at times, the Storm really struggled offensively, finishing ninth in offensive efficiency last season. A large part of the reason for those offensive struggles were there turnover problems and the underlying reason for that problem seemed to be evident upon Jackson's return for injury: without their dominant interior presence, the flow of their offense changed considerably. The Storm's turnover percentage was third-worst in the league in 2011, higher than the Washington Mystics and just behind the Tulsa Shock.

With their stars aging and their championship window clearly closing after a first round playoff exit, changes were probably inevitable for the Storm and it's obvious that Storm coach and GM Brian Agler has placed an emphasis on the future while simultaneously managing to put together a competitive team in the present. 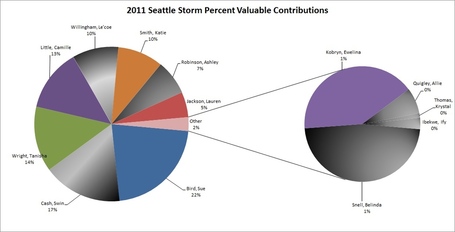 Agler began by trading veterans Swin Cash and Le'coe Willingham to the Chicago Sky for the #2 draft pick overall in the 2012 WNBA Draft that turned into Shekinna Stricklen. Next he traded reserve center Ashley Robinson to the Washington Mystics for second-year forward Victoria Dunlap, who showed flashes of promise in her rookie year. Then he replaced the outgoing veterans through free agency in signing Tina Thompson and persuading Ann Wauters to return to the WNBA in addition to re-signing Sue Bird and Tanisha Wright. And the selection of Keisha Hampton in the second round of the draft might not seem like a big deal now, but she has as much promise as some of the players selected ahead of her.

Of all of those moves, the loss of Swin Cash is unquestionably the most significant to the team - not only was Cash the second most significant contributor to the team statistically, but Storm fans can probably remember countless times when her energy on the court alone shifted the momentum of key games. Whether it was a big rebound, defending an opposing wing, working to score inside, or getting out to score in transition, Cash was a versatile player who knew how to impose her will on games.

Cash was the best defensive rebounder in the rotation behind Jackson with a defensive rebounding percentage of 19.98%. She got to the free throw line the second most often (35.69%) of anyone in the rotation just behind guard Tanisha Wright. For all that Sue Bird did to score, it was Cash who had the highest usage rate in the rotation behind Jackson. Those aren't the major statistics that stand out in the box score necessarily, but those numbers do represent the combination of little things that Cash did to help this team be successful in the last few years.

So you can understand why Storm fans might have been displeased with the notion of trading Cash - and Willingham, their best offensive rebounder - for a #2 pick in a draft that many considered weak.

2011 statistics for new Storm veterans.
* Ann Wauters last played in the WNBA in 2009

Thompson's primary value to the Storm was described previously as 3-point shooting, but her offensive rebounding ability for a team that played opponents about even on the boards last season and lost their best offensive rebounder is also significant.

But the most significant veteran addition might be Ann Wauters for some of the reasons mentioned above: she gives the Storm an interior scoring presence and, most of all, was more efficient than any interior player on the Storm last season. If indeed we trace the Storm's turnover problems last season to the lack of a consistent interior scoring presence in Jackson's absence and thus a tendency to become a heavily perimeter-oriented team, the addition of Wauters to the post could help to balance their offense out a bit.

Even if Wauters is a less efficient scorer three years removed from her last WNBA game, she was key part of the 2008 San Antonio Silver Stars team that made the WNBA Finals - with Wauters able to score around the basket but also facilitate offense from the high post, the Silver Stars had a great complement for dynamic scorers Becky Hammon and Sophia Young. This is not to compare the 2008 Silver Stars to the current Storm roster - they're two different teams. But Wauters' presence on the court and knowledge of the game could help them get through the period without Lauren Jackson and make them a better offensive team once Jackson returns.

College numbers for Storm rookies.
*These are Clark's tendencies from her last season in college, the 2009-10 season

Retaining Alysha Clark and Victoria Dunlap along with 2012 #2 draft pick overall Shekinna Stricklen gives the Storm a number of options to replace what Cash offered the team as the team's starting small forward.

Most WNBA fans have already had a lot of exposure to Stricklen and you can read more here about her value as a prospect. But Clark is more of an unknown given that she was a 5'10" college power forward who has had to change her game over the last couple of years in order to finally make a WNBA roster.

Despite displaying a considerable amount of talent and strong work ethic in college to put up the type of numbers she did in the post on a tournament team at 5'10", Clark will have to show what she can add on the perimeter in order to become a productive player in the WNBA. Whether she gets the minutes she'll need to prove that on this particular roster - full of wings - remains to be seen.

Victoria Dunlap has the profile that speaks to having a better year in a new situation. Before she just stopped getting minutes in Washington last season, she had one of the highest VCRs in the league. Again, the question is how much she'll play and how she'll contribute in this situation on a playoff team. But if she continues to score with the efficiency she did in the preseason - and become a reliable defender - she could become a major asset for the Storm.

One person summed up Agler's approach to this season really simply: "Waiting for Lauren Jackson." While that was tongue-in-cheek, it also speaks to the fact that this team might be treading water again waiting for Jackson to return. But when she does return, there's little question that she can get this team back to the playoffs. The big key might be to watch how well these new pieces fit in with an offense that was Bird-heavy last season.

But in terms of building a team for the future, Agler did the right thing here: Stricklen is a legitimate talent and Dunlap was one of the most promising rookies last season in terms of unknown upside. It's a start and gives them some young pieces to begin building around while remaining in the hunt for the playoffs.