A few teams have already completed their preseason schedules, which means we won't have much to evaluate them on until the regular season begins next week.

But since many of us were unable to see those games, the following are statistical summaries of a few of the recent games just to keep up with who is doing what where in the preseason.

Click here for more on how the key players and stats were determined. For complete descriptions of the statistics used below, see the Swish Appeal statistics glossary.

Fever statistical MVP: Briann January (8.52 MVP) made an efficient return to WNBA action with 3 assists and 1 turnover in 19 minutes for an impressive pure point rating of 5.26. Her 64.28% true shooting percentage was also impressive.

Silver Stars statistical MVP: Shenise Johnson (14.14 MVP) was outstanding in this game with a team-high 15 points on 7-for-8 shooting. Her turnover ratio of 20.77% was a bit higher than one might want, but perhaps we can forgive her for that as a rookie. What's interesting is how she got her points. 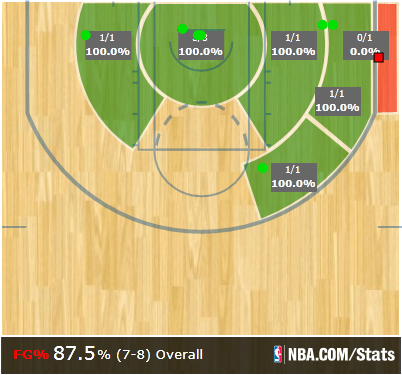 Bearing in mind that these shot charts are set up to display the NBA 3-point line, what stands out about Johnson is both that she can score efficiently in a variety of ways and that she seems to favor working from the right side of the court a bit. Nonetheless, this was close to the type of game I might've expected from Johnson based on her college statistical profile - a player able to do a little bit of everything and fit within the rhythm of the Silver Stars offense nicely. If she can work on cutting down the turnovers and continue to be a successful mid-range scorer, she'll be a huge asset for the Silver Stars.

Key player: Danielle Adams (11.53 MVP) appeared to pick up from where she left off last season, doing all of her damage either right around the basket or from behind the 3-point line in scoring 14 points on 6-for-8 shooting. And the scoring performances of the Silver Stars young players also fit nicely with what the team does: they were both right around the 20% usage range, meaning they didn't dominate the ball at all in order to score, and were stunningly efficient in the opportunities they did get. Once Becky Hammon and Sophia Young (who didn't play) get into the swing of things, that ability to find spots to score efficiently will be valuable.

Key statistic: turnovers haunted the Silver Stars in this game, particularly in the second half. They never really established the type of synergy they normally do and in the third quarter they had 8 turnovers (a turnover percentage of 44.94%, meaning the turned the ball over on close to half their possessions). Part of that is probably just a matter of playing abnormal rotations with players still working to establish that trademark chemistry. But it's definitely the wrinkle to focus on ironing out as of right now.

Mercury MVP: Alexis Gray-Lawson (20.34 MVP) was outstanding in scoring 34 points on 11-for-21 shooting against Japan - even if it's only a preseason game against a clearly overmatched team, that's impressive. But a look at the shot chart might temper the excitement about that game - it's unlikely that the shots will come this easily from those spots against a WNBA defense. 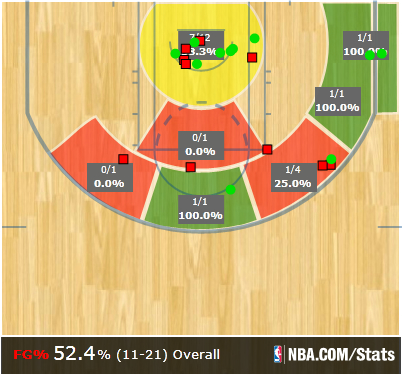 But that doesn't necessarily diminish the entirety of her performance - a 52.38% free throw rate (9-11 free throw shooting) might fit the mold of the shot chart above as might the 17.13% offensive rebounding percentage, but she was aggressive in taking advantage of the opportunities she got. The lingering question might be whether she can continue being productive (and efficient) as a lower usage player once the likes of Candice Dupree and Diana Taurasi return to the court, but this performance is certainly something to build on.

Key player: 6'3" rookie Avery Warley (10.02%) also took advantage of Japan on the interior with an offensive rebounding percentage of 16.73%, but all of the Mercury's posts made their presence felt on the glass. What actually separated Warley statistically was her 4-for-5 shooting. Yet Kristopher Habbas of SB Nation Arizona has already written that someone might need to establish themselves as a defensive presence in the post in order to put together a championship-caliber roster and suggests that nobody really did in this game.

Key statistic: offensive rebounding was ultimately the most significant statistical difference in this game, as one might be able to guess from the two descriptions above - the Mercury beat Japan on the offensive boards 66%-18%.

Japan statistical MVP: Kumiko Oba had quite an all-around game, highlighted by a true shooting percentage of 100%.

Sun statistical MVP: Kara Lawson (9.82 MVP) was outstanding as a distributor in the Sun's win, with 7 assists and just 0 turnover (for an eye-popping pure point rating of 24.56). Although that's impressive, it also highlights the fact that nobody had a standout game for the Sun either - Lawson also shot 2-for-7 in the game, with all 7 attempts beyond the arc.

Key statistic: turnovers ended up being the key statistical difference in this game and while Lawson had a very efficient game as a distributor to help the Sun to a 16% turnover rate, every Liberty player contributed to the team's 30% turnover rate effort.

Key player: Kalana Greene (8.29 MVP) was the Sun's most efficient scorer with a 77.31% true shooting percentage to go with 3 steals. The 66.66% free throw rate also shows some aggression in getting to the basket.

Liberty statistical MVP: Kara Braxton (10.15 MVP) had a game-high 18 points and dominated the defensive boards (10) with a defensive rebounding percentage of 37.98%.

Did you actually see any of these games? Feel free to add your observations in the comments.