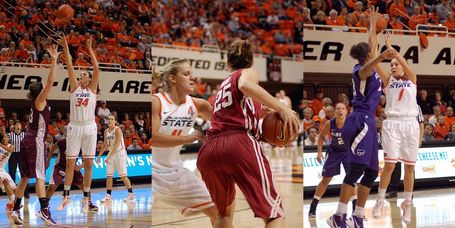 There will be some changes on the roster in Stillwater come fall. Three members of the WNIT-champion Oklahoma State Cowgirls women's basketball squad have announced their intention to transfer to other institutions. OSU media relations has confirmed their release, but there will be no further statement from the school.

The 2011-12 Cowgirls was a senior-less squad, so it was thought that there might be a transfer at the conclusion of the season to make way for incoming freshman, Brittney Martin. A 6-0 wing from Syracuse, Utah, Martin signed with OSU in November. She was ranked 18th in the nation and was considered to be the third best wing in her class. But instead of one transfer, there has been three - so far.

Jenni Bryan (center) will be going to Tulsa to play at Oral Roberts, announced last week. This is the one transfer that I was somewhat expecting to see. Bryan, a 5-9 sophomore guard/forward from Coweta, Okla., averaged 1.7 points and 1.3 rebounds in 8.6 minutes a night her sophomore season. Her minutes decreased as the season progressed and she did not see the court in the last three games of the season. But, most memorably, she sank the game-winner in Stillwater to give the Pokes a win over in-state rival, Oklahoma.

Vicki McIntyre (left) has announced, via Twitter, that she has committed to play her final two years of eligibility at Florida. McIntyre, a 6-6 sophomore center from Omaha, Neb., playing in all 34 games of the season, and started nine games for OSU. She contributed 4.0 points and 4.1 rebounds a game and posted a team-high 44 blocks on the season.

Taylor Schippers (right) has still not made any announcements regarding her destination. A 5-8 freshman guard from Houston, Schippers played in 33 or OSU's 34 games and averaged 17.1 minutes a contest. She added 3.8 points on 35% shooting from the field and 1.3 rebounds a night.

There has been no official word from any party regarding the reasons for these transfers, but a source told me that the difference in coaching style between the late Kurt Budke and Jim Littell may be a contributing factor in some of these decisions.

Curiously, all three players have been taken off OSU's online 2011-12 roster.