SB Nation's Rocky Top Talk has become one of my favorite women's college basketball blogs because David Hooper and Chris Pendley have done such a great job of expressing the highs and lows of following the Tennessee Lady Vols over the last few years.

I've been discussing the pro potential of the Lady Vols' three 2012 WNBA Draft invitees - Vicki Baugh, Glory Johnson, and Shekinna Stricklen - intermittently and figured it was time to share. And after a season in which the Lady Vols would seemingly sleepwalk through one game and then look like a contender in the fullest sense of the word in the very next, their long-term perspective on each of the players and their development seemed to be a valuable complement to some of the statistical insights I have to offer.

So naturally, our e-conversation began with Hooper offering a few brief insights to kick things off, with the caveat that they're Lady Vols fans but not necessarily WNBA fans.

David Hooper: I can give you my one-sentence feelers right now:

Swish Appeal: Let's start with Stricklen. Now that it's been over for a while, when you look back on her four years at Tennessee - and particularly this year when she was looked upon as a leader - do you see a player with "untapped potential" or a "chronic underachiever"?

DH: I'm not sure that "untapped potential" or "chronic underachiever" are accurate. To me, she's a role player's brain in a superstar's body. She's played every position at UT very well, but the key is she played each position as needed.

She was point guard when they didn't have one. She served time at post (sorta) when Johnson was developing and Cain was the only other healthy center. She's been on the wing, at forward, and pretty much anywhere, but only because the team needed somebody to fill those slots. It was never a matter of building a team around Stricklen but rather finishing a team with Stricklen.

If you're wondering how that will translate to the WNBA, it's good to remember that UT did not have a point guard until Stricklen's junior year, and even then they only had freshmen points (Avant, then Massengale). That placed Stricklen at the point for two years when she should have been a guard/wing/forward thingamajig. Had Cait McMahan not left for injury reasons, Stricklen's career would have been the most affected.

The key will be this: will the team that drafts Stricklen have a place ready for her, or will she be plugging holes? The former will be dictated by her brain - a wing player who can rotate out or in as needed to finish off the offense. The latter will be dictated by her athleticism - a body that is physically capable of any position. She needs to be in the former position, and she needs another team leader on the floor to follow. That may be a point guard that finds ways to get her good scoring opportunities; in that case, she could be a career double-double waiting to happen. But she can't be expected to fill any random gap in the lineup and to be a leader. That's what was asked of her at UT, and that's not who she is.

SA: Despite all the moving around filling roles throughout her career, what would you say has been her biggest area of improvement or anything that you might expect to continue improving? There were times when all the moving around - plus who she is - might have obscured how she was getting better.

And since you brought up Johnson, what's impressed you most about her development over her career? One thing I noticed - and we've discussed - is that Johnson sort of stepped into that emotional leader by example at times this season. Maybe it's a stretch to say she "carried" the team, but she definitely seemed to help get the Death Star operational at times when it looked like they needed a little extra motivation.

I know I'm supposed to pretend the game in Palo Alto that I saw in person didn't happen, but Chris seemed to imply that Johnson got noticeably better after that point as well.

Chris Pendley: I'll start with the first question; Stricklen graduates a great scorer who I wouldn't trust as the primary option on a playoff team. Not yet, at least; I think she'll get there mentally (she certainly has the gifts physically), as that's probably something that should go a little better in the pros than it did in college. As Hooper said, she's played basically everywhere but the 5 for a period of time - I think she profiles well at the 3, possibly point forward but that's not her best position.

Still, when she wants to, she can be dominant. That's what I'd look for; I think the switch will go off - er, on - and stay on at some point. The gifts are all there - shot selection, moves, defense - but the package doesn't come together as often as it should. That'll change.

Glory, meanwhile, is gonna make some team very happy. I wouldn't put it past her developing a long-range game if she wants to, but the thing that surprises me most about her is how hard she works. Like Stricklen, she's had unbelievable athleticism; unlike Stricklen, she has really worked to harness that. Her low-post repertoire is incredible at this point; I've held off on the Kevin McHale comparisons in public (said now), but I've certainly thought that with her at times.

Back when she was a sophomore, she was all limbs and raw talent; by ...well, 3 games after Stanford, she was pretty close to a complete player. (Admittedly, I'm completely in the tank for her game ever since I realize she could put it all together and be where she's at now.) I actually think her ceiling is higher than Stricklen's, provided she develops any kind of game outside the paint.

The thing that impresses me about Glory is when she goes after it. Get worked over by Stanford? Figure out how they beat you, and stop that. Notre Dame do a number on you? Make adjustments, step up. I didn't see that with Stricklen as much - or if I did, I didn't notice. (Again, in the tank for Glory. All answers come with grains of salt, etc.)

DH: I'd add a bit about Glory: in college, she was a killer post. In the WNBA (as best as I understand it), she might be better as a 4 if the team has a taller, bigger post player. She'd be on the other side of the paint and would make for interior matchup nightmares. If her "outside" shooting continues to improve, she could be a deadly 4.

SA: I feel comfortable in turning my Pac-12 bias on now - I'd say that Nneka Ogwumike is probably closer to McHale, given her footwork in the post. I'd probably put Johnson in more of a Celtics Kevin Garnett mold (minus the emotional outbursts). Either way, your main point stands: she's gonna make some team very happy. 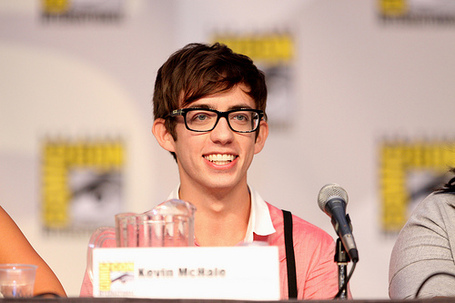 And speaking of a player working with what they've been given, I'd love your thoughts on Vicky Baugh over the course of her career. It's not clear to me where she'll be drafted, but it seems like she's a player that's put in a lot of work to bounce back from injuries and her field goal percentage took a huge leap to 57.7% this season. What
do you make of her progress over her career and was there anything that stood out that would explain that vastly improved shooting percentage?

DH: Baugh is easy: what could have been.

The injuries so badly interrupted her progress and so deeply set her back, that this year we finally saw some of what she was doing her freshman year when she was playing behind the 2008 starting roster that got drafted all in the same year. People forget that in 2008, she was playing 13 min/game as a true freshman behind the best single-year roster in Tennessee history (who were seniors at the time). The injury in '08 was bad; the one in '09 was the finishing blow.

But reality is reality; she's only now back to where she was as a freshman. WNBA teams can't afford to wait on her to develop to where she should be, so I don't think she'll get drafted. Maybe she'll play overseas, I suppose, and maybe a couple years of proving herself will get her into the league later on*.

SA: Chris, I hate to harp on the Stricklen thing, but David said "underachiever" might be an inaccurate way to describe Stricklen; how might you describe that inability for "things to come together" as often as they should for her?

And a quick parting shot: with three potential WNBA draft picks - possibly even two lottery picks - but no Final Four appearances, how do you think this class will be regarded by Lady Vols fans relative to some of the other highly touted classes in program history?

CP: If I had to guess, it hasn't quite come together for Stricklen for a couple of reasons, one of which isn't her fault (bouncing between all positions depending on team need) and one of which is (the appearance of a lack of urgency). Stability with a team and position for a couple years should help with the former; if she has a skill set she spends time working on, that will help. (For example, Stricklen forgot she can shoot beyond the arc for most of this past season. She's pretty good at that kind of thing.) As far as the latter, I'm not sure what she can do about that. Maybe hang out with Candace Parker for a bit.

And that's really what it comes down to, isn't it? While this class had some elite talents - Johnson and Stricklen being chief among them - something never really clicked. Whether that's a question of what's in their head or the coaching staff not preparing them (as much as we'd like to admit, the coaching staff never really figured it out until early March; no offense, but Tom Collen should not school anyone from Tennessee and that's the end of that) is left for the second-guessers.

For more on Vicki Baugh, visit our interview with her posted this morning. For more of our coverage on the 2012 WNBA Draft, visit our "WNBA Draft 2012" section. For more on the Tennessee Lady Vols, visit SBN's Rocky Top Talk.

*Note: this was written prior to finding out that Baugh was on the list of WNBA Draft green room invites.