There's no other way to put it really: Sunday was a bad day to be rooting for California Golden Bears basketball. 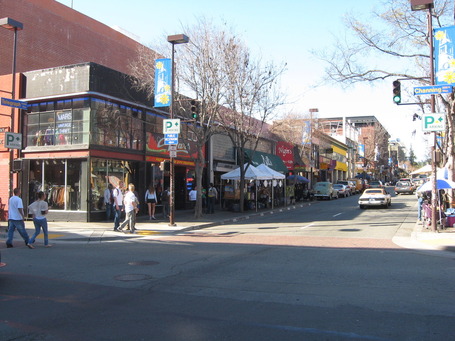 This was supposed to be a good day for Cal: before watching the women's Big Game at Haas Pavilion, I was all ready to watch the Cal men's basketball team earn a share of the Pac-12 championship with a win over Stanford in the other Big Game.

My afternoon in Berkeley began a few blocks from campus at Pappy's on Telegraph Avenue, where I met up norcalnick from California Golden Blogs and a couple of other folks.

But by the time I got there, things were already starting to go all catawampus.

It's not even that I would claim to be any particularly huge Cal fan, despite growing up in Berkeley - it was just an absolutely excruciating game to watch (and I've watched the entirety of multiple Golden State Warriors games, so that really means something). When teams weren't throwing the ball away or officials calling fouls on seemingly every other possession, teams were missing layups.

By the time Shannon (@sgc72) and her friend Rachel arrived - decked out in Cardinal red - to grab a bite to eat before the women's game, the men's game seemed pretty much over. Not because the score had gotten out of hand but because it seemed obvious that Cal was not ready to play basketball on this day.

No matter what happened in the women's game, it had to be better than that debacle of a men's game. 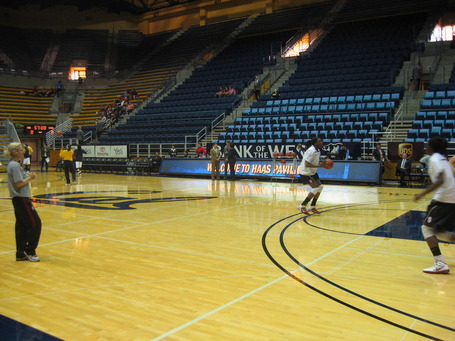 Our small group took the walk up Telegraph to Haas Pavilion to get there early and get seats in the section right across from the Cal bench on the floor, which provided a great view of all the action. Across the court, Stanford coach Tara VanDerveer was comfortably ready to dismantle all that Cal had successful pulled off in the first game at Maples Pavilion: Cal point guard Brittany Boyd causing problems with penetration, the full court press that caught Stanford off-guard late in the game, and of course their Cal's defense helping to hold Stanford to 3-for-20 3-point shooting at home.

CGB community member CalBear81 - who wrote this great essay on the first intercollegiate women's basketball game between Cal and Stanford - showed up with a group of folks. Norcalnick and I saved our seats and headed to Cal's pre-game chalktalk, which Shannon felt it was better to opt out of as a supporter of The Enemy. 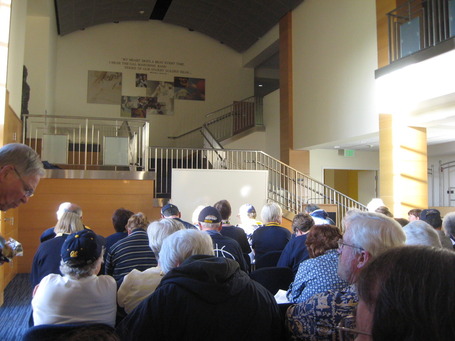 Cal assistant coach Charmin Smith took on the pre-game chalktalk duties and gave a pretty entertaining preview of the game. And although Shannon's hesitation in coming was warranted, it's not as if the main points were exactly a secret: keep the ball out of the Ogwumikes hands because once it gets there bad things occur. Pretty much everything else flowed from that: closing out on shooters off of double teams (on the Ogwumikes), getting back in transition (to stop the Ogwumikes from scoring), and preventing second chance scoring opportunities (mostly from the Ogwumikes).

I think it's safe to speak for both of us in saying that we left the pre-game session fired up and ready to see Cal at least give Stanford a challenge. 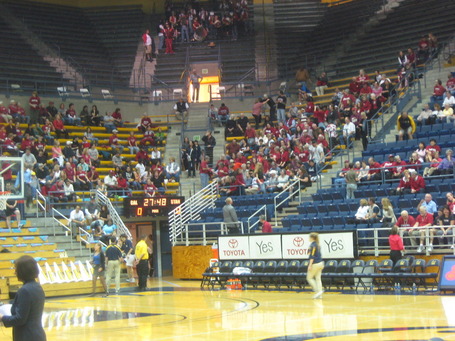 Shannon claims that she lost norcalnick and I as we walked into the arena, but I think you see the truth: she was afraid of sitting with Cal fans. Very afraid. So she sought refuge in the section of Stanford fans behind their bench. My mom, a UC employee, joined us just as the game was starting decked out in her blue and gold to see her first-ever women's basketball game and her fresh commentary was fun to listen to throughout.

It was game time, there was great energy in the place, and Cal came out fired up. 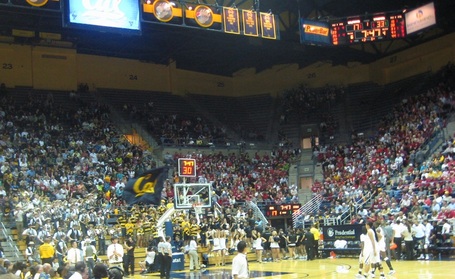 Unfortunately, things got out of hand relatively quickly although the crowd generally stayed hype in the first half.

Without going too deeply into things, most of what went right for Cal the first time around didn't go right this time.

Cal did indeed come out fired up, but offensively they looked frantic, the Ogwumikes were controlling the paint and Stanford exceeded their total number of three pointers made at Maples within the first 15 minutes of Sunday's game. Perhaps rather than playing scared as they often do in blowouts against Stanford, Cal's pre-game energy and expectation quickly turned into frustration, manifest in some bad mistakes. 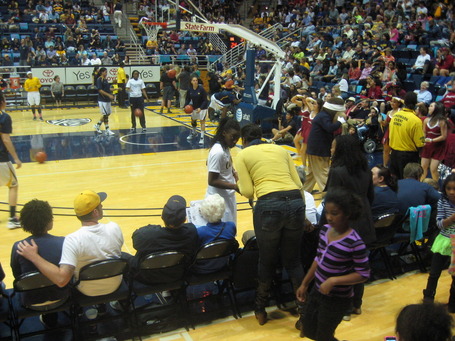 The game was pretty much out of hand by halftime, with Cal being down 19 points already. However, it wasn't nearly as excruciating as that men's game we'd watched earlier: on top of the fact that Stanford was just playing like one of the top 2 teams in the country, hope for a Cal victory became remote rather quickly whereas the men's team slogged their way through a game they could've won against a team that struggled to make layups.

Eliza Pierre was definitely a standout on this day primarily because her defensive intensity did so much to both Stanford ball handlers and at least begin to make things happen. And you know that Pierre could probably play 40 minutes at full speed without getting tired if someone let her do it. The problem was that Stanford was able to sag off Pierre offensively on most possessions, which clogged up the middle and made it hard to keep her in the game. With Cal shooting just 28.1% in the first half, it was just difficult to keep her in there.

And that sort of sums up the game: Cal never found a complete answer to Stanford and every lineup they put on the floor seemed to leave them at some sort of fundamental disadvantage.


Unicycle basketball during halftime at Haas.

Nevertheless, the crowd was still into the game at halftime and the unicycle basketball show (above, here and here) helped keep the energy high during the break. I'm not entirely sure mom enjoyed the part where the guy got on a unicycle high enough to help him dunk. She kept worrying he would fall and after he made the dunk she just wanted him to get down so he wouldn't hurt himself. Him starting to lose his balance did nothing to calm her anxieties.

But those were about the last moments of joy for Cal fans. 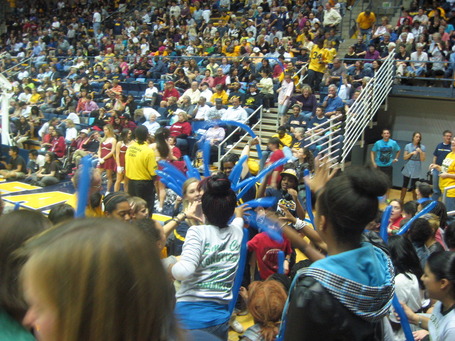 They passed out balloons to our section near the end of halftime, presumably to create a sea of blue in the arena and buoy Cal's impending comeback effort. Within about 5 minutes and Cal already down 25 or so, I swear I heard the first balloon pop: people had just decided to re-purpose them for making balloon animals, which I suppose made more sense. 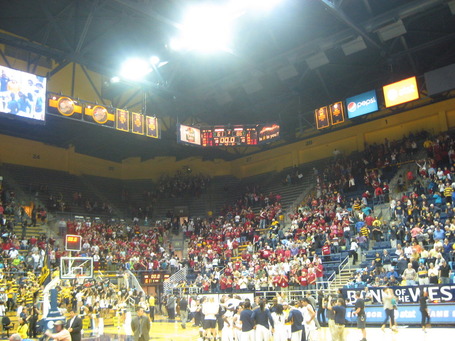 It didn't end well, but Cal fans gave their team a nice ovation as they walked the court. Obviously, some lamented the fact that Cal got blown out on national television after all the bellyaching about them not being ranked in the Top 25.

And on the bright side, Cal finally found some rhythm offensively after they got down by about 24 or so under 10 minutes left, not that it mattered. Ok, so that's a reach.

During the pre-game shootaround and halftime, The Show Goes On (seriously, one of the best songs I've heard played in a college arena in three years) was played and it was a fitting song for this game, win or lose.

The Bears now enter the Pac-12 tournament as the #2 seed and if things hold true to form, they'll get a third chance at beating their long-time rival. Barring complete foolishness from the 2012 NCAA Tournament selection committee, Cal will be heading to the Big Dance.

It wasn't quite the end of the season Cal basketball fans wanted - men's or women's - but both will have a shot to right things in the conference tournament.