The Big 12 all-defensive team selection as a sophomore puts up numbers 14.7 points and a conference-leading 11.1 rebounds per game. She leads the league in offensive rebounds a night, scooping up nearly five a game for her team and has 300 total rebounds this season. She knocks down over 50% of her field goal attempts. She is coming off her third player of the week award after averaging 22 points and 16.5 rebounds in the week's two contests. She set a school free throw record for attempts - she was 15-of-24 against Mizzou - which is also a new benchmark for a conference league game.

She has posted an impressive 14 double-doubles and is the only player in the Big 12 to be averaging a double-double this season, even after recording a new season lows of four points and seven rebounds the last time out of the gate.

She is one of four players this season to be ranked in the top 35 nationally in field goal percentage and rebounding, joining the Ogwumikes an a conference counterpart she'll be playing against on Saturday. She even has her own All-American candidate video package.

She'll be finishing the regular season slate in Waco, Texas tomorrow at 11 a.m. CT on FSN. She hopes to knock off the last NCAA Division I unbeaten, the Baylor Bears. Oh - you thought I was talking about Baylor's all-everything Brittney Griner? Nope. I'm talking about Iowa State's Chelsea Poppens. 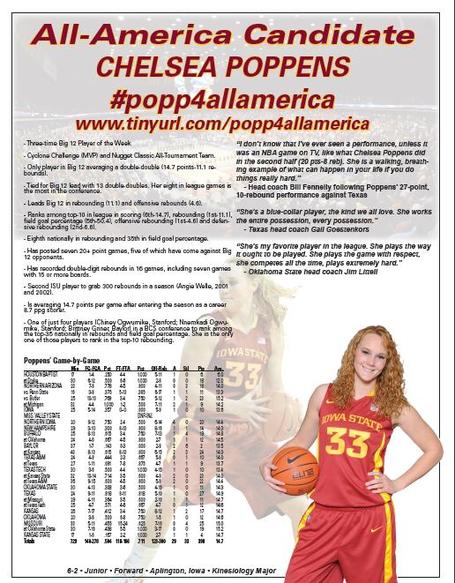 The comparative numbers between the two might surprise you - it did me.

Griner is the league's top scorer, averaging 22.7 points compared to Poppens' 14.7 points per game. Griner outshoots Poppens from the field at a clip of 60.7% to 50.4%, but both women are in the top five in the league. Due to size alone, the rebound numbers are very impressive to me. Six-foot-two Poppens outrebounds the 6-8 Griner 11.1 to 9.7 boards a night and owns a 4.56 to 3.60 advantage on the offensive glass. Iowa State's opponents have the lowest rebounding numbers in the league (933 total against), and the Cyclones lead the Big 12 in defensive rebounding percentage due in large part to Poppens' hard work on the glass.

Iowa State head coach Bill Fennelly's has a quote on Poppens' All-American page in Saturday's game notes, regarding one of the best halves of basketball he's seen Poppens play.

"I don't know that I've ever seen a performance, unless it was an NBA game on TV, like what Chelsea Poppens did in the second half (20 pts-8 reb)," Fennelly said. "She is a walking, breathing example of what can happen in your life if you do things really hard."

Her opposition in that career-high scoring game was Texas and head coach of the Longhorns, Gail Goestenkors, serves a heaping of praise for the junior's All-American literature too.

"She's a blue-collar player, the kind we all love. She works the entire possession, every possession," Geostenkors said of Poppens.

Oklahoma State head coach Jim Littell's quote on the pump-up page is about the highest praise a player can get, if you ask me.

"She's my favorite player in the league," Littell said. "She plays the way it ought to be played. She plays the game with respect, she competes all the time, plays extremely hard."

But you don't have to just read these quotes in the media materials - this isn't just some schmaltzy literature piece with embellishments of a player's excellence. When you talk to these coaches after games, you get the same response.

After the Cowgirls beat the Cyclones in Stillwater last weekend - a game in which Poppens had 19 points and 17 rebounds - Littell echoed his sentiments on Chelsea.

Poppens got popped in that game in Stillwater, literally. She finished the night out with a black eye after some contact near the end of the first half of the game. But after the midway break she came back to the court and nearly posted a second half double-double. Her nine points and eight boards in the first was compounded with 10 points and nine rebounds in the second. Her coach took time to talk about Poppens' play after the hard-fought loss.

"She had good numbers; I don't think she played as well as she could have, to be honest with you," Fennelly said. "When you're coaching and you've got a kid that goes out there and gets a big black eye and keeps playing, you've got to love that about her. I think that's the kind of player all coaches want. Even when it's an off night, it's still a pretty good night because of the way she plays."

One of her most marked "off nights" was the first time the Bears and the Cyclones met this season, a low-scoring 57-45 win by Baylor. In that game, Poppens had one of her worst shooting nights statistically, where she went 1-for-7 from the field and finished with 2 points. But with her shooting touch off-line, her hard-nosed defense led to a career-high six steals in one of the Bears' closer wins in their undefeated season. Griner, on the other hand, scored 26 points - nearly half of her team's production in their second-lowest point total of the season.

For the Cyclones to prevent a repeat of that outcome in Ames and shock the basketball world by beating the Bears, Poppens will have to play up to her potential as one of the best in the league - a category you might not have put her in after a somewhat pedestrian sophomore season (8.6 pts, 7.5 reb per game).

"I've said at home to people that if you take Brittney Griner out of the league, Chelsea Poppens would be in the discussion for player of the year in our league," Fennelly said. "I really believe that. Her numbers are good, she plays hard, she's probably the number one person on every team's scouting report.

"I think she's earned that over time, and when you're a kid that has no reputation to (get to a level like) Coach Littell said, that says a lot about what you're doing. A kid that no one knew how good she was coming into this year and now we're two games to go in the conference season and we're talking in that kind of terms, in the same kind of sentence?

"That says a lot about her effort and the effort that she's given on a daily basis to make herself a really good player in the best league in the country."

Saturday afternoon we might find out just how good Poppens really is.