I cannot deny that I have trouble keeping up with EuroLeague and overseas basketball. Partly due to the fact that there are so many teams, divisions, countries and players involved. And partly due to the fact that the system is just so different to what I'm used to following. So when I got my Eurobasket newsletter today about the first round of the EuroCup quarterfinals underway, I figured since it's postseason and the teams are down to a manageable number of eight perhaps it was time to take a look. 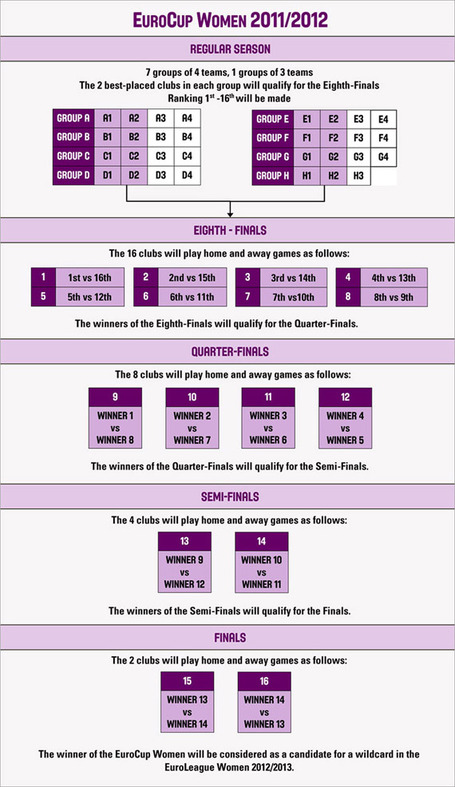 As you can see above, the 31 teams that competed in the regular season were pared down to 16 and from there down to eight - where we sit now. Each round of the postseason is actually two games - a home-and-home with their competitors - to advance further into postseason play. The first games of the quarterfinals were completed yesterday and the home teams going 1-3 in the first leg of the series. Here are the matchups, results and stats from the Americans still in the hunt for the EuroCup Championship:

Kursk got a buzzer-beating triple to fall to swoop in and take the road win in the closely contested matchup. Temeka Johnson poured in 22 points on 8-of-11 shooting to help lift the visitors to victory. Michelle Snow added 16 points and 11 rebounds before Anna Petrakova's game-ending dagger sealed the win for Kursk. The two will face off in Kursk on Feb. 8.

One of the road teams to pick up a victory, Botas muscled out the win on the back of Courtney Paris' monster game of 24 points and 22 rebounds. Most impressive were the 11 offensive boards Paris picked up en route to the victory. She had a double-double of 12 rebounds and 10 points heading into halftime and Gran Canaria could find no answer for Paris. Quianna Chaney (LSU/Chicago Sky) posted a game-high 27 points for Botas to compliment the play of Paris. Monica Wright added eight points in the winning effort. For Gran Canaria, D'Andra Moss (VCU) led the way with 21 points but was just 6-of-30 from the field. Lisa Lee (Charleston) added 10 points in the loss. Botas will return home to try to close out the series on Feb. 9.

The winter weather in Kayseri almost made this game unplayable, but when the women took the court, Nakia Sanford was unfazed by the delay. Sanford poured in a season-high 19 points on 9-of-12 shooting. Latoya Pringle Sanders added 13 points and scooped up a career-high 19 rebounds to effort her team to the 49-30 edge on the glass. This is Sanders' fourth double-digit rebounding game of the eight she's played this season. Doneeka Hodges contributed 13 points and five assists in the winning effort. Hainaut Basket was led by 15 points and 11 rebounds by Amisha Carter (Louisiana Tech). Ashley Houts (Georgia) added 10 points and three steals in the loss. The final game of the series will be on Feb.9 in Saint Amand Les Eaux, France.

Chevakata rolled to a road win off of Jessica Davenport's 17-point, 7-rebound night. Loree Moore put in eight points and seven rebounds. Leilani Mitchell was the surprise leading rebounder in the game despite taking the loss. Mitchell grabbed 13 rebounds and added six steals and five assists for Arras. Chevakata returns home to Vologda to finish the series on Feb. 9.

The semifinal matchups will pit the winner of Chevakata/Arras against Dynamo Kursk/MBK Ruzomberok. The other pairing will consist of Botas/Gran Canaria and Kayseri Kaskipor/Hainaut Basket with competition beginning March 1.