The sixth annual Mike Blake Basketball Tournament took place a few weeks ago to honor the memory of a beloved figure in the North New Jersey area, as described previously by Ron Fox of the Town Journal. Among the girls games played in the tournament were a triple overtime game won by Ridgewood and the championship game won by Midland Park.

UPPER SADDLE RIVER, NJ - A little behind on this piece. The sixth annual Mike Blake Tournament is completed. In fact the check has been received, cashed and partially spent on a much needed new camera.

At any rate, the Blake is always a favorite to officiate. This year called for six games. Last season the luck of the draw saw all girls games. This year only two, but they were memorable.

First order of recounting, this was an eighth grade girls game that went three overtimes. The site was the Allendale gym and, very fittingly, the coaches agreed on using a pink basketball. Don't be fooled by the score, or lack of scoring - these were two very good teams that defended and made points very hard to come by.

Greeting the Ridgewood coach Jim Cosgrave, I joked that I should have brought my yellow flag; that is in reference to girls lacrosse which we both work in the Spring and I have had the pleasure of working with Jim.

At the half, Upper Saddle River leads 4-0. Both teams have good size up front, are zoning and on offense are trying to beat or crack the zone by living on the perimeter. The first 16 minutes shows life beyond the arc, on this evening, is not too good.

Ridgewood broke the ice the third quarter and neither team could get any type of a lead better than two possessions. Upper Saddle River has a good post player but in this contest she is not posting - instead she takes a high post past and attempts a drive that usually ends in a fall away attempt in the lane.

With the finals on the line, the girls are relaxed and enjoying the game. We enter the fourth quarter and as I remind the Ridgewood girl, 'Hold your spot on the inbound' she smiles saying, "I really like your whistle."

To little surprise we end regulation tied. Same with the first two OTs. Late in the third, Ridgewood has the lead and Upper Saddle River owns the final possession. During the final time out I discussed the situation with partner Glen Mezzatesta. We surmise that Upper Saddle River, with one of their better players fouled out, will probably settle for a three point attempt to end it. We are right but the shooter takes a hurried shot that barely finds the rim. Ridgewood prevails in a competitive and enjoyable contest, that ends near 10 p.m. As they exchange post game pleasantries one Ridgewood player says, "I have to go home and study for a test." To which I say 'best of luck'. 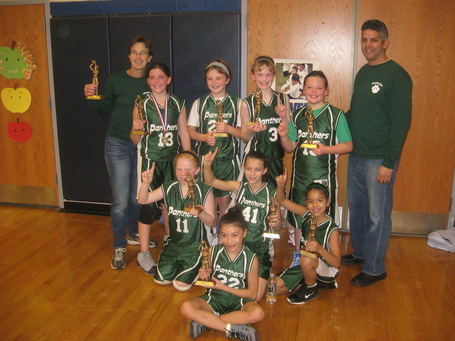 This 5th grade final is in the main gym at the middle school in Upper Saddle River. My notebook has 172 scribbled in it. That was the reminder for the exit on the Garden State Parkway. Brings back memories of the 'Exit 16W' Nets.

Midland Park, from the outset, will be a problem for their opposition. They have excellent size and are extending possessions by dominating the offensive glass. Even when they are boxed out, they have the ability to reach over (legally) and tip the ball to keep it alive.

Allendale shows more offense in the second half but never enough to pose a serious threat. On this level there is only pressing the last two minutes of each half. With two minutes to go Midland Park holds a 23-11 lead. Allendale shows full court pressure hoping for one last shot. Midland Park calmly finishes it out earning the championship.

After watching the awards being distributed it is time to head out. Passing the auxiliary gym, see that the Midland Park girls 4th grade team is capturing that division title. Good night for the Lady Panthers.

The final game was the first worked after hearing of the tragic loss of St. Louis University coach Rick Majerus the day before. Working it, I dedicated the game to his memory. Couldn't help but think how Majerus would have enjoyed watching two fifth grade girls teams play. How they executed, what offense they ran, the matchups on defense...he probably would have jotted down a note or two. Majerus was immersed in the game, on all levels. The sound of the ball bouncing on hardwood or black top was joyous music to him. He will be missed.