Tennessee Lady Vols' bounce back from 'unacceptable' loss as simple as A, B, C: Andraya, Bashaara, Cierra

The Tennessee Lady Vols considered their loss to the Tennessee-Chattanooga Lady Mocs "unacceptable" and some pundits thought the Georgia Tech Yellow Jackets would take them down on Sunday in their brand new arena. So what was the difference? The answer is as simple as A, B, C.

Share All sharing options for: Tennessee Lady Vols' bounce back from 'unacceptable' loss as simple as A, B, C: Andraya, Bashaara, Cierra

Walking into the spectacular McCamish Pavilion -- named after Georgia Tech alum Hank McCamish -- was a sight to behold as this venue is state of the art: it seats over 8,600 and has theatrical lighting comparable to Madison Square Garden and the Staples Center.

The atmosphere was electric for Georgia Tech’s first game in their new home. There were over 5,000 fans in attendance and many pillars of the women’s basetball community that were present: Lin Dunn and Mickie Demoss of the Indiana Fever, former Olympic and Auburn coach Nell Fortner, CEO of the WBCA Beth Bass and the first women’s basketball coach in Georgia Tech’s history and current Atlantic 10 commissioner, Bernadette McGlade.

After the Tennessee Lady Vols struggled in defeat with Tennessee-Chattanooga on Friday, it was thought by many basketball pundits that their game against Georgia Tech could turn into a blowout...for the home team.

There were so many lingering questions after Tennessee's loss to the Lady Mocs: Would they bounce back or crumble against much more talented team in the Yellow Jackets? Would they be able to keep the game close or would they get blown out against a much tougher opponent?

Not only did the Lady Vols answer the questions, they responded in a way that’s reminiscent of a Tennessee team determined and with pride in their 71-54 victory.

But what made the Lady Vols look like an unquestionably different team on Sunday than the one that lost dreadfully to Tennessee-Chattanooga? The answer was as clear-cut as "A", "B", "C".

First let’s start with the "A": Andraya Carter. Carter’s steadiness and poise in this situation was quite impressive. In front of her family and former high school teammates, Carter was asked to steer a ship that had gotten off to a shaky start.

Many freshmen are not ready for such a responsibility and many coaches definitely aren’t comfortable placing such a task upon such young shoulders. Carter, however, is not your typical freshman; she has an equanimity well beyond her years. The combination of her maturity as a player and her physical gifts are what make her special: her 30.5 inch standing vertical shocked the Nike Sparq testers so much that they made her jump three separate times just to make sure.

Let’s put in perspective of how remarkable her athleticism is: Russell Westbrook -- whom ESPN’s Stephen A. Smith has said is arguably "the most athletic point guard to ever play in the NBA" -- had a standing vertical coming out of UCLA that was 30.0 inches, the same goes for John Wall. High flyer J.R. Smith’s was 29 inches and Kevin Durant’s vertical in 2007 was 26 inches. It’s safe to say that Carter’s athleticism is a rare gift, just like her composure.

"Andraya just has a calmness for us," said Tennessee coach Holly Warlick. "I love her athletic ability, I love her knowledge of the game and she’s just solid, she just does the right things. I didn’t even realize she played 36 minutes; I have a lot of confidence in (her).

"She doesn’t make a whole lot of mistakes, she makes things happen, that’s awesome for me because we are going to need her. She brings a lot of confidence to our team."

Now onto "B": Bashaara Graves. Graves is affectionately nicknamed "Beast" and when you watch this freshman play, it’s clear as to why that moniker fits so well. Graves -- just named SEC freshman of the week -- plays a physical brand of basketball that’s not often seen in today’s game of basketball. And for someone so young, her brute presence in the post is very veteran-like.

"She’s a beast, that’s the only way to put it," said Burdick of Graves, a 6'2" freshman. "She played great in the exhibition games, she played great against Tennessee-Chattanooga and she played great tonight. She’s just so consistent and she just doesn’t let up."

"And I think that’s why she gets the results that she does."

Usually, most people want to lead when things are going well but the true definition of a bona fide leader is being able to lead when adversity rears its head. Followers and front runners usually always fault others but a leader looks internally first - never deflecting blame but accepting responsibility. Friday's loss was unacceptable by the standards of Tennessee, and there was something that had to be changed immediately.

Enter in the last letter "C": Cierra Burdick; the Lady Vols' 6'2" sophomore decided to step up. 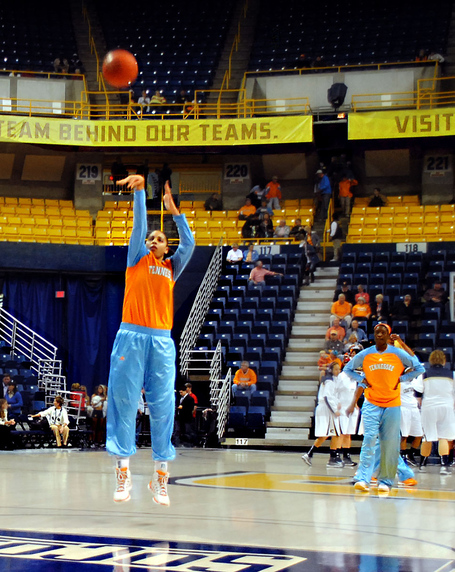 Photo by Maria Cornelius of Inside Tennessee.

"I just walked on the bus and looked at her (Warlick)," said Burdick. "And said ‘I’m sorry’ and then walked to the back of the bus. It was emotional - she didn’t deserve that (performance).

"When I got back to the hotel that night, all I could do was lie on my hotel room floor and stare at the ceiling. I was hurting; I hadn’t felt that bad since I lost my senior year (in the state playoffs)."

"I trust her, I believe in (Cierra)," said Warlick. "I loved our answer (to Georgia Tech’s 13-0 run in the second half), us coming back, fighting and not giving up. Because I think maybe last year’s team would’ve dropped their shoulders."

Tennessee has taken the first step of getting back on track; it was just as simple as "A", "B", "C".

For more on the Lady Vols' victory over the Yellow Jackets from the opposing point of view, check out our storystream for complete coverage of the game.