Unfortunately, I missed Game Two of the Western Conference Finals today. Fortunately, DVR'ing exists. The following are my running notes of the game as I watched the DVR recording. I also had two "spoilers" in my email inbox when I got home that primed to me to watch a couple of things, but I'll get to those at the end.

Share All sharing options for: Minnesota Lynx vs. Los Angeles Sparks: Notes on Game Two of the Western Conference Finals 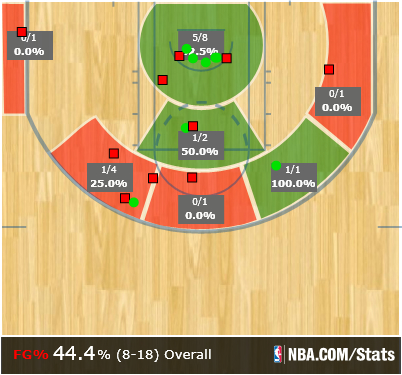 L.A. Sparks shot chart for the first quarter in Game 2 of the Western Conference Finals.

Post-game note: Acknowledging that the shot chart above is based on a NBA court, the Sparks weren't entirely perimeter oriented, but did take a number of long twos and threes out of half court sets. So it wasn't quite as bad as I felt it was when first watching.


Parker's prayer in the fourth quarter is at about the 17 second mark.