Back in 1998, Joe Lacob's San Jose Lasers faced Jim Weyermann's Seattle Reign in an American Basketball League exhibition game in Santa Cruz, CA. With the two now working together with the NBA's Golden State Warriors organization, they definitely make the Bay Area seem like a stronger candidate for a WNBA franchise. Yet the question might not be whether they're interested, but when.

Share All sharing options for: Kirk Lacob on the Golden State Warriors' interest in bringing a WNBA team to the Bay Area

In describing the Golden State Warriors' decision to relocate their D-League affiliate to Santa Cruz from North Dakota, Rhamesis Muncada of newballpark.org wondered if the renamed Santa Cruz Warriors would be the first pro sports team ever in the small city best known for its beach boardwalk.

And although the Warriors might be breaking new ground in making 'Surf City' home to a professional basketball team, it's certainly not the first time a pro basketball game has been played there.

Way back on October 24, 1998, the nearby San Jose Lasers faced the Seattle Reign in an exhibition game for the now-defunct American Basketball League in the Santa Cruz Civic Auditorium. The Lasers - who were preseason favorites to make the ABL finals, according to Susan Slusser of the San Francisco Chronicle - ended up winning the game by 20 points. And unfortunately, the league abruptly folded about two months later, leaving the Lasers without a chance to justify their favored status with a championship.

Nevertheless, the game itself was not without its lingering significance: two weeks ago when I had the opportunity to interview Santa Cruz Warriors GM Kirk Lacob, he mentioned that 1998 game in the Civic Auditorium when describing the Warriors' process of looking for a venue in Santa Cruz. Ultimately, the Civic Auditorium didn't exactly fit the Warriors' needs, but playing that game in Santa Cruz was an early seed that led to this particular group of people deciding that basketball could work in Santa Cruz.

Lacob is the son of Joe Lacob, who agreed to purchase the Golden State Warriors in 2010 and was not only the owner of the Lasers during their brief existence but also part of the ABL's first ownership group, according to Douglas Robson of the San Jose Business Journal. On the other end of that game was Jim Weyermann, who was the Reign's GM for during their time in ABL and is currently the president of the Santa Cruz club owned by Joe Lacob. So naturally, our conversation briefly shifted to women's basketball: with the Lacob family and Weyermann now working together as part of an organization that just bought into both the NBA and the D-League, how much interest is there in getting back into women's basketball and bringing a WNBA team back to the Northern California?

"Well, I don't know what I'm allowed to say and what I really should say, but to be clear [Weyermann] is a president of the Santa Cruz Warriors but his overarching title is Vice President of New Franchise Development - that's his full title," Kirk Lacob responded when asked about the possibility of the organization bringing the WNBA to the Bay Area. "So he might be president of this team, but for the Warriors he still has a title: he's the Vice President of New Franchise Development. His job is to help us with any new projects that happen."

The rumors of the WNBA returning to Northern California have been around ever since the Sacramento Monarchs abruptly folded - former Monarchs coach John Whisenant said that he was aware of interest in bringing women's professional basketball back to the Bay Area back in 2010, even before Joe Lacob officially took over the Warriors. Yet if there's any group of people in the nation poised to jump into the WNBA, this Lacob-Weyermann combo would seem to be at or near the top of the list. In addition to Joe Lacob's experience owning a team, Weyermann is the type of "incredibly energetic person" that you'd want at the forefront of creating excitement around any new sports venture, D-League or WNBA.

Hanging prominently on the sparsely decorated wall of Weyermann's office in Santa Cruz is an autographed poster of that 1998 Reign team. It's the first thing you notice when stepping into his office and as we chatted briefly about his ABL experience in Seattle, it was obvious that he still cherishes that experience in women's basketball. 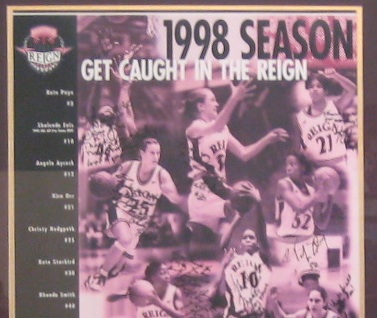 But the question for the Warriors might not be whether they're interested in the WNBA but when, even if an opportunity to buy a WNBA team presented itself right now: in briefly discussing the possibility, Weyerman also expressed reason to temper speculation that a move would be made soon.

The Santa Cruz club is still in the early stages of just trying to establish itself in a new market before their first home game in late-December: they just recently broke ground on a temporary arena that they expect to complete in mid-December and they still have to build a fan base for professional basketball in a surfer town. In addition to getting that project going, the Warriors are in the early stages of the process of building a new arena 75 miles away for Golden State's move from Oakland to San Francisco, which is expected to be completed prior to the 2017-18 NBA season. On top of all that, they're just trying to turn the woeful Golden State Warriors franchise into a winner, which is certainly no small task: the Warriors have made the NBA playoffs just once in the last 18 years, due to a combination of bad luck, bad decision-making, and poor previous ownership.

In other words, Joe Lacob's organization as a whole is already juggling a number of major projects and might be cautious about adding something else to their plate in the immediate future.

"I think the Bay Area could use a WNBA team - I think it's a terrific spot for one," said Kirk Lacob during the interview. "I think we have a history of doing it. We love basketball, in any shape or form. Right now the only summer basketball (in the Bay Area) is summer league and it's really, really fun, but it doesn't cover every demographic that we have in this community. The Bay Area is unique because while it has a fan base for all sports, it really loves basketball. It's the most knowledgeable [fan base] in the league in the Bay Area. So it would not be an awful thing if down the road something were to happen."

For the full interview with Kirk Lacob about their progress in Santa Cruz, visit the storystream at SB Nation's Golden State of Mind.