After winning their first-ever WNBA title and bringing Indianapolis its first professional basketball championship since the Indiana Pacers' ABA years, we should not expect anything less than the Indiana Fever making the front page of their local newspaper, the Indianapolis Star.

But it feels like a small step forward to see the runner-up get the same type of attention; it's great that the Minneapolis Star Tribune considered the Minnesota Lynx's loss to the Fever in four games in the 2012 WNBA Finals as front page news. 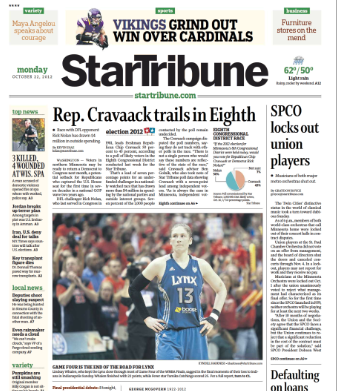 And to think, they got front page billing on the morning after the local NFL team won a game on the same day.

S/O to resident Lynx fan Shannon Cotterel for letting us know about this one.