After yet another slow start, the Minnesota Lynx got back to their strengths with a record-setting rebounding effort to defeat the visiting Indiana Fever in Game Two of the 2012 WNBA Finals.

For more on the 2012 WNBA Finals, check out our storystream on the right sidebar of this page.

After Coach Reeve was T'ed up in tonights #LosLynx win, the Lynx outscored the #Fever 35-21 & forced 10 turnovers.#ReeveRiledUp!

Prior to Game Two of the 2012 WNBA Finals, ESPN's cameras showed Minnesota Lynx coach Cheryl Reeve telling her team in the locker room that she was tired of hearing people talk about Indiana Fever players after a surprising win in Game One.

And there's no better way to do that than to set a few records of their own on their way to an 83-71 win that was arguably far more decisive than the final score might suggest.

While Reeve's outburst and technical with 3:10 left in the third quarter ultimately marked a major turning point (click here for the video) and was the subject of some discussion on Twitter after the game, it was All-WNBA guard Seimone Augustus who took center stage as the embodiment of a re-energized Lynx team.

Before getting to all that the Lynx did exceptionally well in Game Two, the Fever's first half defense should actually be commended - despite allowing the Lynx to shoot over 50% in the second quarter, the Fever didn't really allow a shot from the right side of the court in the first half. 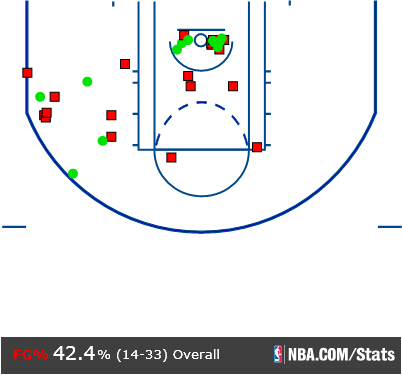 Minnesota Lynx first half shot chart in Game Two of the 2012 WNBA Finals.

Without looking through the shot charts of every half for the Lynx since the beginning of the 2011 season, I'll assume that's a rare feat to even limit the Lynx to that extent. Most importantly, Augustus was held to 0-for-4 shooting in the first half with four misses from the right wing.

The second half was a different story: Augustus unlocked the right side of the court, even before Reeve's outburst. 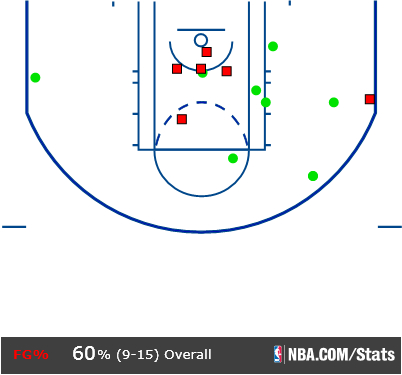 Augustus was quoted after the game as saying that she always has a fire lit under her and she was already off to a hot start before Reeve's technical - in the first seven minutes of the second half, Augustus had 10 points on 5-for-7 shooting.

It's just that after Reeve's strategic technical foul, Augustus started to show off a bit of her range in hitting three 3-point shots and finishing with a game-high 27 points after pouring in 23 in the first half, third most in a half in WNBA Finals history behind a couple of Angel McCoughtry performances in the 2011 WNBA Finals against the Lynx.

Yet that might not even have been the most impressive aspect of the 35-21 run that the Lynx went on after Reeve's technical.

While it's natural to focus on the scoring flow of the game when looking at extended runs, the thing that immediately stood out was that the Lynx completely dominated the boards during that 13 minute period from Reeve's technical to the end of the game.

The Lynx didn't allow the Fever to get an offensive rebound in that time and they got 7 offensive boards of their own that they turned into 12 second chance points, which was ultimately the margin of victory. However, that rebounding effort wasn't simply the result of Reeve's contagious passion: they had dominated the boards all game.

Although the Lynx have struggled with rebounding to this point in the playoffs, this game reflected a hallmark of theirs from last season: they were among the best defensive rebounding teams in WNBA history last season. And epitomizing what makes this team so great, it wasn't a singularly dominant performance that fueled that effort - it was a fairly well-rounded team effort.

While Brunson led the team with 7 boards, Augustus had 6, rookie Devereaux Peters got in during that final 13 minutes of the game and had all five of her boards, and Maya Moore had a second consecutive strong offensive rebounding game after lackluster board work through most of the playoffs.

Lynx Statistical MVP: Maya Moore does a little bit of everything to help the Lynx win

But that's only one piece of what made Moore's night special even as Augustus was making spectacular plays. Moore had 23 points of her own, including 13 points over that final 13 minutes to match Augustus. On top of all that, on a night on which Lindsay Whalen was hampered with foul trouble early and had a sub-par game as a distributor, Moore led the team with a team-high 5.37 pure point rating, meaning she was about as efficient as a distributor last night as Whalen was during the season.

For a team that has struggled with turnovers throughout this season and at times during the playoffs, Moore's performance on an off night for Whalen is even more significant. But they got some help from the normally sure-handed Fever as well.

Fever statistical MVP: Tamika Catchings has 27 points of her own

The Fever's 22 turnovers was the third most in WNBA Finals history and we can simplify that by saying their 27% turnover rate for the game was disastrous. While the Lynx were playing inspired ball after Reeve's technical, the Fever did their part to contribute to their own demise with 10 turnovers that led to 15 Lynx points. Although the entire team struggled with turnovers, unfortunately Catchings had the dubious honor of leading the team with 7, the most in a WNBA Finals game since Nikki Teasley in 2002.

Yet despite the Lynx enjoying an impressive performance at home and the Fever aiding the cause of the home team with turnovers, there's another layer of explanation for their poor offensive rebounding that actually reveals something for them to hang on to as they head back home to play Games Three and Four: part of the reason the Fever had so few rebounds was that there weren't all that many available.

Setting aside Minnesota's dominant rebounding performance, the Fever shot 61.9% from the field in the second half - if you don't miss much, perhaps you can be forgiven for not getting many offensive rebounds.

Catchings led that impressive scoring effort with an extremely efficient 27 points to go with 8 rebounds. But more needs to be said about her scoring effort: with Katie Douglas out, Catchings' offensive burden has steadily increased compared to what she did during the season.

What made last night special was that she had a very high (especially for her) usage rate of 31.27% and yet had an outstanding true shooting percentage of 79.03%. Compare that to her season true shooting percentage of about 55% at a usage rate of about 25%: we might normally expect a player's efficiency to go down as they shoot more often simply because they have a greater risk of missing shots. If you want statistical evidence of how locked in Catchings is, the fact that she's taking on more and more of the scoring burden for her team and shot more efficiently last night is quite persuasive.

Are we headed for a five-game series?

For Indiana, that they were able to essentially withstand Minnesota's run for a short time in Minneapolis on the strength of hot shooting has to be reason for encouragement as they head back to Indianapolis with an opportunity to win the series on their home floor.

For Minnesota, perhaps they have re-discovered their formula for success after a clearly sub-par performance in Game One - Lynx center Taj McWilliams-Franklin said that they just needed to return to their strengths of rebounding and running, as reported by Roman Augustoviz of the Minneapolis Star Tribune. For those that might have thought they had lost their rebounding mojo, Game Two was evidence to the contrary.

In short, last night we got a glimpse of what Lynx basketball has been all about and then some.