How the Indiana Fever got to the 2012 WNBA Finals

The Indiana Fever have advanced to the 2012 WNBA Finals after escaping a pair of a three-game series in the Eastern Conference Playoffs, despite making a change to their starting lineup and losing star guard Katie Douglas in Game 3 of the Eastern Conference Finals. How did they do it? For more on the WNBA Finals, check out the storystream with the menu bar to the right.

Share All sharing options for: How the Indiana Fever got to the 2012 WNBA Finals

The Indiana Fever certainly didn't take the path of least resistance to the 2012 WNBA Finals.

Yet the Fever also pulled off a somewhat rare, though not exactly inexplicable, feat on Thursday evening against the Sun: they won despite getting beat on the offensive boards and turning the ball over more often.

The reason for that should be obvious: simply outstanding 3-point shooting.

Four Factors statistics for Indiana in their 87-71 win in Game 3 of the Eastern Conference Finals.

The Fever didn't just shoot well in the Eastern Conference playoffs: their 37.5% 3-point shooting is a playoff-high. And against the Sun they just caught fire.

The Fever shot 10-for-16 (62.5%) from 3-point range on Thursday night and were 7-for-7 in the first half as they got out to a 19-point lead at halftime. And of course with a lead that big on the Sun's home floor there's a bit more to the story: in my preview of the series, I mentioned that, "The worst case scenario for the Sun is getting involved in a game where they're exchanging long twos for Fever threes with Larkins continuing to dominate the boards and giving the Fever second chance shots." That would've been pretty bad. What actually happened was a nightmare scenario: the Sun got caught up in exchanging 0-for-10 3-point shooting in the first half for the Fever's perfect 3-point shooting.

Yet although the game looked as though the Sun were having an off night, it wasn't entirely that simple: they actually shot a respectable 45.83% from inside the arc. The problem was a simple one: as the Fever defense focused on defending MVP center Tina Charles inside, they left Sun shooters open around the perimeter. The Sun simply didn't capitalize on those opportunities; had they shot less threes, the problem would've been less pronounced, 5-for-20 first quarter shooting notwithstanding. 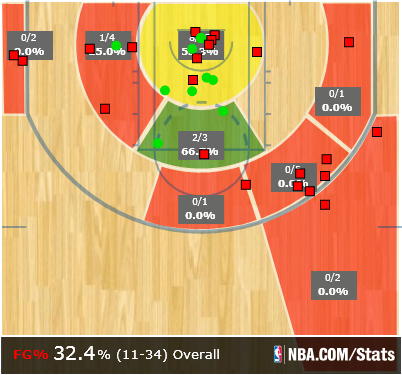 First half shot chart for Connecticut in Game 3 of the Eastern Conference Finals.
Note: NBA.com's shot charts use the NBA's 3-point line. Click here to isolate their 3-point shooting.

The Sun's 3-point shooting woes as a team also serve to highlight the individual struggle of point guard Kara Lawson in Game 3. Four of those threes the Sun missed were Lawson's attempts, all from the right wing. She did finish the night with 16 points on 5-for-15 shooting, but 8 of those points came in the fourth quarter when the outcome was no longer in doubt. A lot of that was due to Indiana's outstanding perimeter defense, which contested a number of shots and did a solid job of stopping penetration and forcing the Sun to drift to the perimeter a bit.

In contrast to the Sun's struggles on offense, the Fever were obviously feeling it: aided by their perfect 3-point shooting, the Fever were 17-for-29 from the field in the first half. But I also want to direct attention to that "adjusted synergy" number to the right of that table of numbers above.

As described before, synergy is a junk stat that I've used to approximate how efficiently a team has moved the ball - it's more descriptive than explanatory because some teams are simply better one-on-one teams than others. You'll note the huge chasm between the Fever and Sun in Game Three - those numbers are essentially the difference between an above average and exemplary team in terms of ball movement. What makes that stand out as impressive is that the Fever did that despite turning the ball over at a higher rate - when you're moving the ball as well as they were and hitting threes like that, it's a lot easier to overcome a minor turnover problem.

While 3-point shooting figured prominently in Game 3 of the conference finals, it also figured prominently throughout their playoff journey. As described above, they have shot better than anyone else thus far in the playoffs and if you're looking for something that might have predicted them surviving the injury to Douglas, the team's shooting proficiency is a good start. While Douglas is the team's second-leading scorer in the playoffs and their most consistent 3-point threat in terms of frequency of attempts, guard Erin Phillips has been hot during the Fever's playoff run: Phillips is currently shooting 57.1% from the 3-point line after her 3-for-4 performance on Thursday night (Phillips shot 43.75% during the regular season). The combination of Phillips' shooting and ability to handle the ball on a night that point guard Briann January was struggling really gave the Fever a boost in Game 3.

When a team is moving the ball like that, can defend the perimeter with the intensity we saw against Lawson, hitting threes like that, and has multiple players able to step up it's a lot easier to overcome struggles like they had elsewhere on the floor in Game 3. That combination of factors helped them shoot more efficiently in the playoffs than they did in the regular season while holding their opponents to a slightly lower shooting efficiency; though not quite as exaggerated as things were against the Sun, the Fever had a significantly better shooting efficiency differential in the playoffs.

That's a recipe for success and scoring wasn't the only improvement the Fever have seen during the playoffs.

Tamika Catchings has unquestionably been the Fever's MVP during the playoffs, but there's also little question that they wouldn't be in the Finals without the rebounding prowess of Erlana Larkins.

To be clear, Lakrins has been a great rebounder for the Fever all season. But what's significant about her playoff performance is that she got about twice as many minutes on the floor and her rebounding rates increased by a couple percentage points; in other words, Larkins just represents a rebounding presence the Fever simply didn't have out on the floor for quite as long during the regular season. Overall, Larkins' presence helped the Fever play about even with opponents on the offensive boards during the playoffs (by percentage) after offensive rebounding had been a significant statistical weakness over the course of the season.

Yet Larkins wasn't the sole reason for their improvement on the boards as a team. It should be noted that although center Jessica Davenport has only played 3 of the Fever's 6 playoff games, she has been much better on the offensive boards. Tammy Sutton-Brown has come off the bench for most of the playoffs and increased her defensive rebounding contribution by about the same margin. Then of course there's their leader in defensive and offensive rebounding percentage during both the regular season and playoffs, who has improved her defensive rebounding a bit during the playoffs: Catchings, who could actually be considered dominant on the defensive boards during the playoffs.

Key question: Will Katie Douglas be able to play in the Finals?

It seems that the Fever have been struck with injuries around playoff time more often in recent years than any team deserves. And though they survived Douglas' injury to get to the Finals, it's hard to imagine them beating the Lynx without her, not only for her obvious offensive contribution but also for her defensive contribution. With Catchings playing the power forward spot this season, Douglas' length and intelligence on the perimeter would be huge in trying to defend the many threats that the Lynx present.

Clearly, there's a lot to be said about a turnover problem that the Fever have had during the playoffs, but even that is related to Douglas: she gives them an alternate ball handler who has been relatively efficient as a distributor throughout the season. Against Minnesota's pressure defense, having another ball handling option will be huge for the Fever.

But after the way the Fever have returned to the Finals for the first time since 2009 - including the visible passion that Catchings has been playing with - it's almost impossible to dismiss them as a challenger to the Lynx. The run itself is a credit to Catchings, coach Lin Dunn, and their resolve as an entire unit.