Share All sharing options for: Photo Essay & Notes From the Stanford Cardinal's 74-71 Overtime Win Over the Cal Golden Bears

It's a crying shame that national television audiences were deprived of seeing the California Golden Bears take the Stanford Cardinal to overtime at Maples Pavilion in the first of two games this year between two of the biggest rivals on the West Coast.

Thankfully, Shannon (@sgc72) invited me out to Maples Pavilion for the game and was a wonderful host for the afternoon (as usual). There's still more actual basketball analysis of this one to come, but for now here are a few of the photos from my day at The Farm (wearing blue and a subtle yellow, pseudo Cal colors) as well as a few random videos...not that my amateur photos are any consolation for this game's absence on the TV screen. 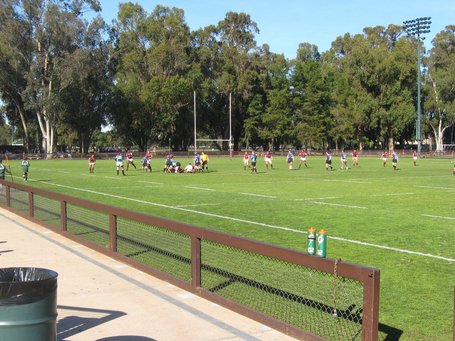 The day started out on the rugby field to grab a ticket from someone, where the Stanford women's rugby team was killing NorCal 55-0 when we left to head over to Maples Pavilion. Although it was only for a few minutes, this was my first time watching women's rugby and I found myself yelling - for Stanford - in that short time despite the fact that I have no idea how rugby really works. I think I wanted a Stanford player to zig when she zagged; she ended up being right as she actually scored while I had to ask why she fell down at the end. 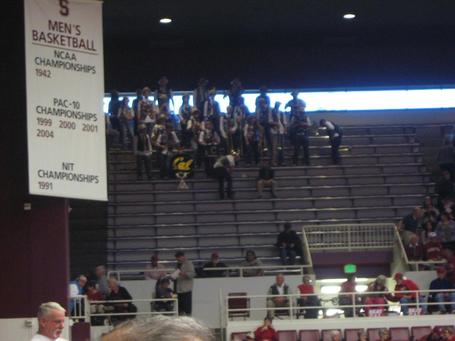 We finally got into Maples about 15 minutes before the game and got to our seats where I saw the Cal band off to the left corner of the arena. I was hoping for some heated band exchanges between them and the Stanford band, but there weren't many fireworks. It was funny that they were sitting in the dark for most of it.

No, Stanford has not contracted with the military to create all-terrain rover drones for combat. But this is the robot used to shoot shirts in the crowd yesterday. Maybe it isn't new, but I hadn't seen it and just had to share. 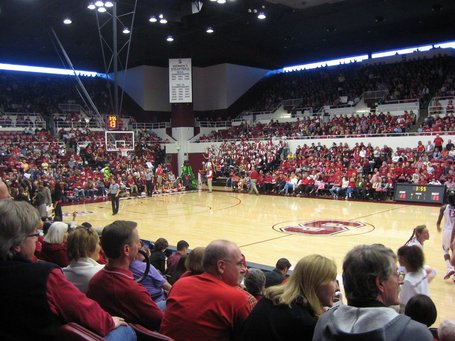 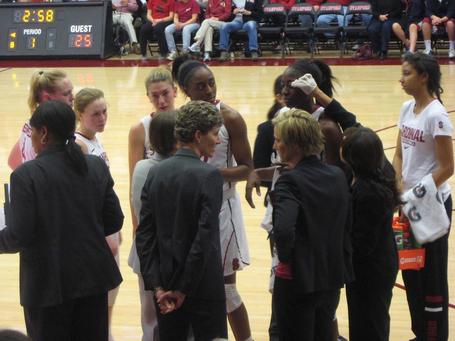 But anyway, this was a basketball game and I was watching it despite all the distractions. lt was a tight game throughout the first half and even though Nneka Ogwumike had an "off night", Chiney was putting in work. Here you see a trainer working on her eye sometime after her contact fell out. An Ogwumike losing a contact is apparently a frequent occurrence. 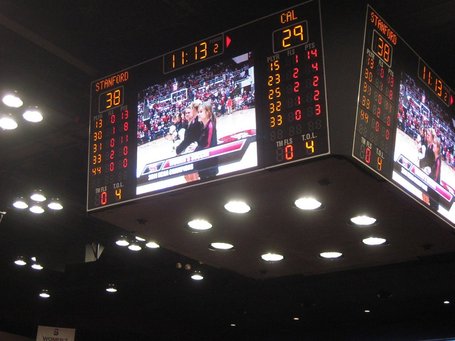 Moving on to the second half, Stanford appeared to be pulling away at Maples once again as the score suggests. Please note Layshia Clarendon's (Cal's #23) point total at this point about mid-way through the second half. But they also took some time to honor Stanford's national championship women's soccer team who put on a little shot afterward:

The goal was to see who could juggle down the court and make a basket first. Someone eventually did. Again, I find this highly entertaining - at least in part because this is a task I am unable to do myself - so I'm sharing. 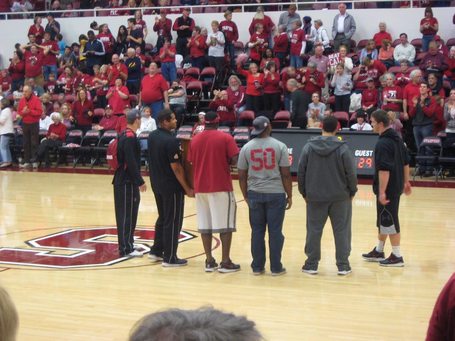 Another non-basketball distraction: the Stanford football team showing off their axe obtained from the Big Game. Nothing to see here. 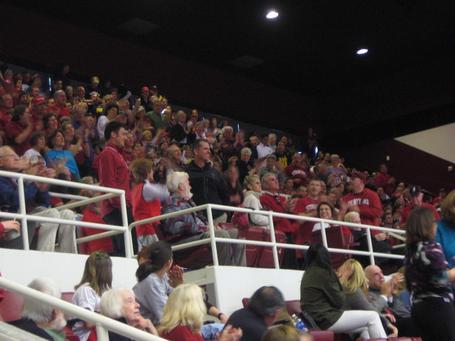 San Francisco 49ers coach and former Stanford football coach Jim Harbaugh was in the house and got a standing ovation from the fans at Maples, at least in part for working an absolute miracle with the Niners this season in bringing them to the brink of the NFC Championship. About a week removed from the sting of a loss to the New York Giants, it was even easier to stand up and appreciate what he did for the better of the two local NFL teams. 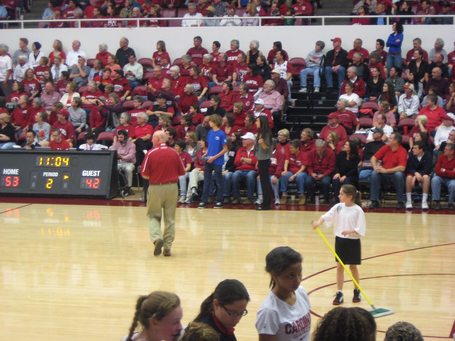 The kid standing up in blue is the one who designed the shirt shooting robot. Pencil him in for an engineering scholarship someday. 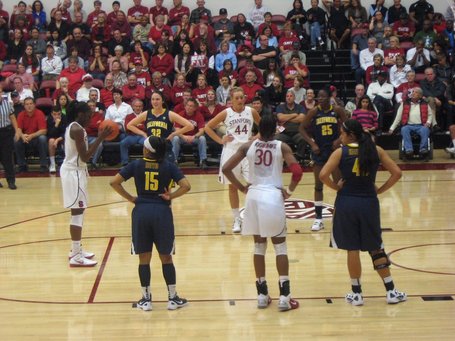 Here's a scene fans saw multiple times yesterday: Chiney Ogwumike at the free throw line. In fact we saw it 12 times and, as norcalnick of California Golden Blogs observed, it was the difference in the game. But had Cal won this one, Cal freshman point guard Brittany Boyd (#15) would have been the story of the day as she was extremely impressive in her first-ever Big Game at Maples. And, to my mind, she was the story of the day anyway as she carried the team for most of the game, with a combination of defense, distributing, and scoring. 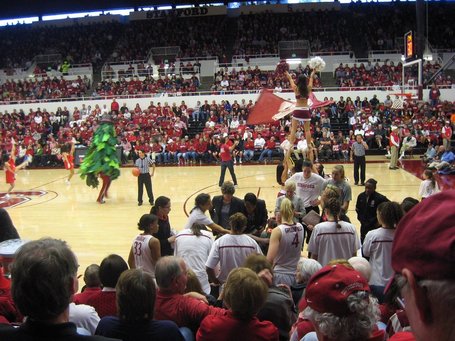 On the flip side, Stanford's freshman guard Amber Orrange (#33) didn't have such a stellar day in this matchup of freshman point guards. As C&R already pointed out, one might wonder whether she would have found a rhythm had she gotten more consistent minutes - she spent most of the second half on the bench after seemingly getting frustrated early on. 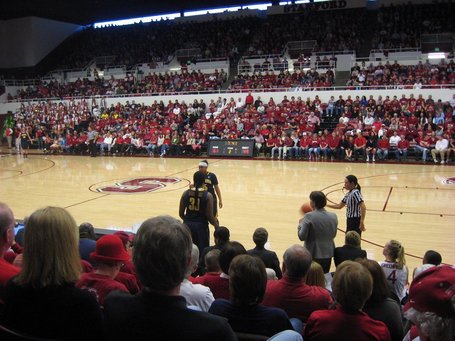 The scoreboard shows Cal down 61-49 with 7:41 left and honestly it just didn't seem like they'd be able to come back with the Ogwumike sisters - especially Chiney, but Nneka is obviously a presence even if she's "off" - so dominant inside. 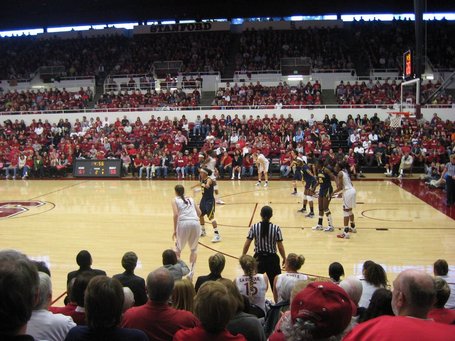 But then Cal started to throw some defensive wrinkles at Stanford and began to close the gap to the point where it was a more manageable 61-56 with 4:56 left. Here you see Cal setting up in a 2-3 zone defense and it made a lot of sense, at least in part, due to the fact that Stanford was shooting so poorly from the 3-point line - to this point, the Cardinal were shooting 1-for-17 from beyond the arc.

The problem with playing 2-3 zone was Bonnie Samuelson (#41) standing on the wing always ready to shoot upon receiving the ball. Two Samuelson threes put the Cardinal up 9 with 3:14 left before a media timeout seemed to help break up the momentum. 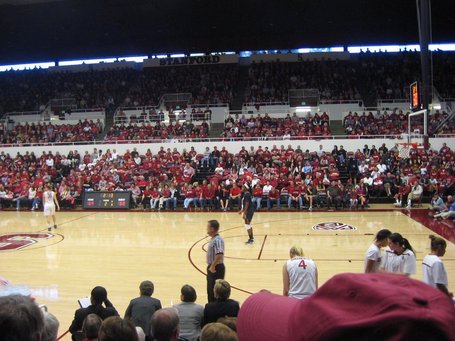 Then down 69-62 with 2:13 left in the game, Cal imposed a full court press out of a 30 second timeout. In the photo above you see freshman Rashanda Gray - who was more impressive in terms of potential than her modest stat line suggests - back deep in the press to protect the basket. With Cal disrupting Stanford's offense and getting more fast break opportunities, Clarendon stepped up hitting a number of big shots to erase the Cardinal lead. But ultimately, Cal's defense was extremely impressive 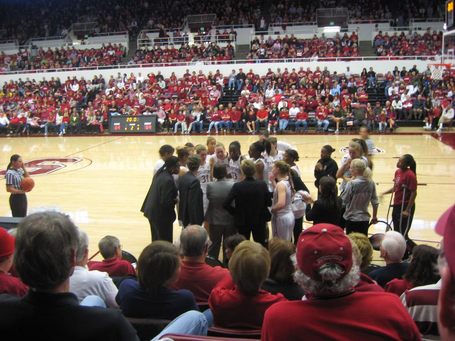 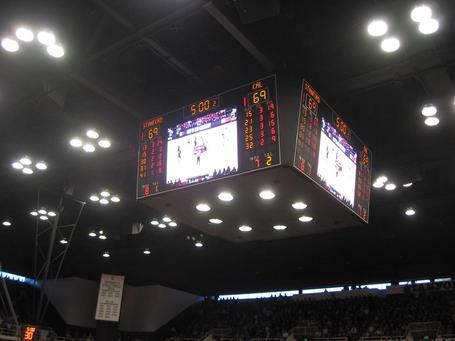 Cal allowed the inbounds on the first play but Stanford wasn't able to make anything happen against Cal's defense, which forced a second timeout with 11 seconds left. However, Cal made yet another defensive change denying the pass to all of Stanford's ball handlers and forcing an inbounds to Nneka Ogwumike right around the 3-point arc. Ogwumike did get a shot off along the baseline, but it was contested and a couple of putbacks missed to force overtime. But also note Clarendon's point total above: she put in 11 points in the final 11 minutes.

Of course, OT ended up being Ogwumiketime and Cal just never really got anything going. They had a chance to tie with one final possession, but Clarendon was forced into a couple of contested threes that didn't go down. 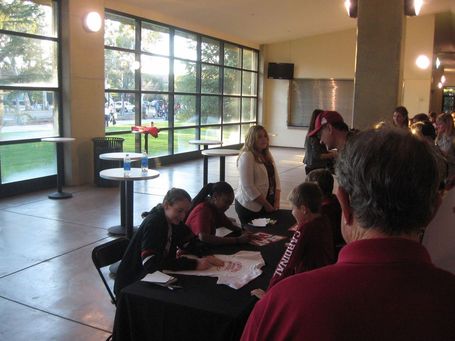 After Stanford coaches Amy Tucker and Tara VanDerveer spoke to season ticket holders along with former Cal-player-turned-Stanford-video-coordinator Lauren Greif, we came out of the arena to see Stanford players still signing autographs for their fans. 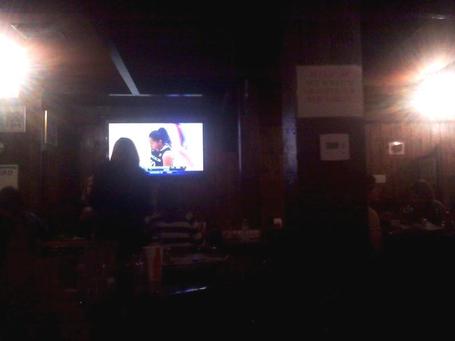 After leaving Maples, we made the short drive to Oasis for some pizza, adult beverages, and more women's basketball on TV featuring one of our favorite Pac-12 players: Nia Jackson of the Oregon Ducks (pictured above in the grainy cell phone image). Oregon ultimately lost to Oregon State in Corvallis.

Overall, it was a fun day at the Farm despite Cal coming up on the short end of the stick. Big props to Shannon for being such a great host. Follow her on Twitter (@sgc72) and maybe she'll host you sometime too.