Consistent with what made Whalen's performance in San Antonio so outstanding this past Sunday, at the core of these "point guard" rankings is a focus on the quality of their decisions rather than any conception of positional "purity". There are situations that demand a pass-first mindset and situations for which a scorer's mentality is most appropriate.

Either way, the best point guards are able to do what's best for their team in the moment and do so efficiently.

Within that framework, it doesn't matter whether we consider the person bringing the ball up court a "pure point guard", a "combo guard", a two filling in as the team's lead ball handler; some of the purest point guards in the league this season have also been some of the least efficient and some of the league's best point guards in the last five years have been far from pure. What matters most in the context of winning basketball games is how well that person with the ball in their hands to initiate their team's offense makes decisions to help their team.

Rather than being entirely passive about running the team, Seattle Storm point guard Sue Bird articulated the importance of making being the aggressor as a point guard pretty well after dropping 29 points on Tulsa this past Saturday.

"I think for me to be able to help my team I have to be aggressive and that doesn't mean score, it doesn't mean shoot, it just means be aggressive," said Bird, who has become decidedly "less pure" this season with the Storm's offense considerably less efficient than last year. "If that means I'm open to take the shots I have to take them. By being aggressive and getting some shots to fall in the first half, in the second half I was able to be aggressive and find my teammates and they did a great job of knocking down shots and making plays and all those good things."

So this ranking is based on insight gained from interviews with coaches, players, and knowledgeable analysts in addition to what players are doing this season (as described here at length this off-season). The quality of a player's decision making is determined with the following two proxies (both formulas described here and more on what they do here again):

To get a sense of the field of top lead ball handlers a bit, let's first look at the top 25 WNBA distributors ordered by their willingness to pass (assist ratio, which is a pretty good proxy for point guard style on a continuum of distributor (high ast ratio) to scorer (low ast ratio)):

So using those numbers, we can try to figure out which players stand out as the top decision makers as lead ball handlers this season. I find that the visual helps considerably and illuminates some of the finer tensions: 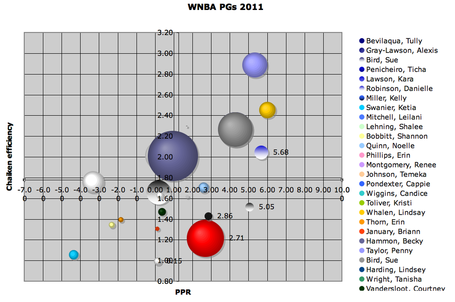 Notes on this graph:

To be honest after the top five it's something of a crap shoot right now between about 10 incomplete players - just comparing this year to last year, we can say it's a down point guard year.

The Sparks' situation might be a microcosm of what's happening league-wide: Kristi Toliver is their starting ball handler, but their least efficient distributor. Ticha Penicheiro is their most efficient distributor, but is coming off the bench as a below average scorer and has a negative plus/minus. Noelle Quinn is somewhere in between the two statistically, but isn't necessarily the lead ball handler very often.

Then there are just more questions once you get beyond L.A. Where do players like Cappie Pondexter fit? How do you compare Temeka Johnson to Courtney Vandersloot? Is it realistic to think that Erin Phillips will remain more efficient as a distributor than any of those three as she gets more starts?

Somewhere within the answers to those questions is a top 10 and I think that comes down to taste, which we can discuss. For now, I'm going to offer the top 5, which I think is a bit more solid.

With a negative plus/minus as a starting point guard, it's hard to put Montgomery even this high. But as the starting point guard with the second-highest usage percentage, Montgomery is more of a scorer than most and her ability to do that while maintaining an above average distributor and scoring efficiency is noteworthy.

What sets Montgomery apart is her 38.80% free throw production rate, which is first among currently starting point guards and demonstrates her ability to drive and get herself to the free throw line. That said, her 2-point percentage of 41.52% is low and not a positive for a player who is considered a scorer.

But most of all, Montgomery is contributing more to her team from the point guard spot than most: she accounts for 17.7% of the Sun's overall statistical production.

The argument against Robinson being this high should be obvious: aside from coming off the bench, she's on a team full of ball handlers, and she's just a rookie. And the way she plays - usually somewhere between frantic and light speed - it's hard to imagine her being as efficient as she is.

Making her position relative to others more surprising, Robinson was not at all an efficient distributor at Oklahoma, but a large part of that was that she had such a high usage percentage as she was responsible for so much of their offense. In fact, it's not exactly even surprising as two other point guards have made a similar jump in efficiency - Shannon Johnson and Lindsay Whalen.

Yet despite all of that there was a brief time when rookie Danielle Robinson was the most efficient distributor in the league. And for a rookie, settling for second behind Lindsay Whalen now isn't bad.

What Robinson does exceptionally well is use her gift of speed to her advantage. Thus far, it doesn't appear many defenses can keep up with her and some of her funniest moments are when she just races up the court runs around for a few moments to get everyone chasing her and then with everyone completely out of whack finds a teammate wide open for a shot. She's not necessarily a conventional point guard, but her organized chaos style works.

Her biggest strength is still her ability to use her speed to get to the free throw line to score. Aside from being ridiculous, her league-high 55.31% free throw production rate is tops among point guards by a nearly 15% margin (and that person, Briann January, is injured). So that ability to get to the rim as a scorer and set up others so efficiently - without the help of a 3-point shot - easily makes Robinson one of the biggest threats with the ball in her hands in the league.

Nevertheless, it's still hard to put her above her perennial All-Star teammate.

There are those who will say that Hammon "isn't a point guard" and she definitely splits the job of lead ball handlers with multiple other players on the Silver Stars roster. But again, I'm not as interested in classifications as much as effectiveness and it's impossible to deny how much of a threat she is to set up teammates or score when she penetrates to the basket.

So that big globe in the middle (that actually engulfs like 6 other players) is Becky Hammon, which actually illustrates why she's been so good and why she's not ranked higher. Hammon has the highest plus/minus and accounts for 19.10% of her team's total statistical output. While she has the highest usage percentage of any player who could be considered a lead ball handler and has a true shooting percentage of 61.01%, she turns the ball over more often (15.61%) than both Bird (9.54%) and Whalen (10.86%) which make her less efficient statistically.

The argument for Bird begins with a question: Where would the 11-8 Storm be without her? By that logic, there's a strong argument that Bird is the most valuable player in the league. Accounting for nearly 25% of her team's overall statistical production, there is no point guard in the league this year that has accounted for a larger percentage of their team's success (and Sylvia Fowles is the only player in the league who has accounted for more than Bird).

She has the second highest plus/minus rating among point guards. Although she's using up more plays this year (around 22.01%), she's also shooting more efficiently (56.64% true shooting percentage) and has a higher free throw production rate (15.21%). Even though she has become a less "pure" point guard as her scoring numbers have gone up, she has one of the top five pure point ratings in the league.

Any player having that good of a year is going to have a strong argument as the best point guard. And that's without accounting for the intangibles like giving her team big shots when they need it.

However, the question of who's doing the best job of running the point is not necessarily a question of overall value but who is actually doing the best job of making decisions and running the team as a lead ball handler. And the decision between Bird and Whalen at point guard ultimately comes down to not only a matter of taste, but also one of "best player" vs. "most valuable player".

Without taking anything away from Bird's MVP-caliber year for how much she has contributed to her team, we can also say that there's a reason why Whalen is the farthest along on both axes of that graph - no point guard in the league has been more efficient at balancing passing and scoring than Whalen. Even as phenomenal as Bird was last season, she was not the most efficient among her point guard peers.

In addition, Whalen has the best 2-point percentage among starting point guards, which is a testament to not only hitting the mid-range jumper but also her ability to get to the basket and finish - her 37.14% free throw rate is well above average among point guards and a sign of her aggression driving to the basket. While Bird and Tanisha Wright alternate lead ball handling responsibilities, Whalen is second only to Hammon with 50.95 touches per game.

And although it might seem minor at first for a point guard, Whalen's rebounding ability is also an asset. Her ability to get a defensive rebound, turn and immediately control the rhythm of the Lynx's transition attack might be overlooked at times - it's not that there's anything wrong with a post player getting a rebound and making the outlet pass, but in terms of keeping a defense off balance Whalen's ability to immediately demand attention certainly helps her team. Which brings up another interesting point - compared to both Bird and Hammon, Whalen adds significantly more value when she's not scoring. Her value added rating - everything but points - is tops among starting point guards and second only to Penicheiro.

Whalen just does more on the court more efficiently than any other point guard in the league this year and it's not as if she doesn't have a case for MVP - she accounts for a team-high 19.54% of her team's statistical production and should be considered among the top 10 MVP candidates in the league.

Right now might be too early to make a definitive choice between Bird and Whalen, particularly if Bird maintains her MVP-pace this season. But it's hard to say Whalen is second to anyone.

2010 WNBA Point Guard Rankings (with explanations of those stats above)