Share All sharing options for: Get Swish Appeal on your iPhone with SB Nation's new app & a re-introduction to SBN's features

SBN demo from Mark on Vimeo.

It is your contributions that make this growing community fun to be a part of and I know a few of you who attend games would love to have a way to more easily participate on the go.

So as of this morning, the SB Nation iPhone app is now available in the App Store!  Best of all, it's Free!

Now you can stay on top of all the latest news and commentary for Swish Appeal and all 300+ SB Nation blogs from your iPhone. More on the features after the jump.

With the SB Nation iPhone app you can: 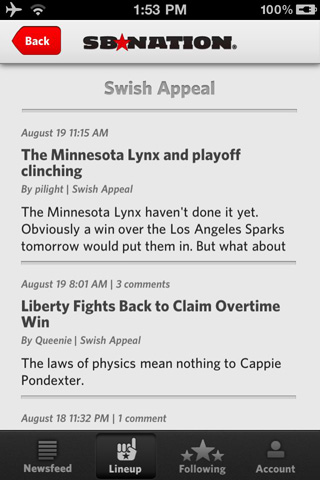 Here's how to get it:
Go to the App Store on your iPhone and search for "SB Nation"
-- OR --
Go here and click "Download Now"

A few places to find WNBA coverage around SB Nation:

1. An Android version of the app is coming soon. Hopefully by the end of the year.
2. The app is free.

3. Comments are basic read and reply, but SB Nation has plans to enhance them in future updates.
4. You can use your existing SB Nation user name and password to login on the app.
5. It will be available on the iPhone and iPod Touch (compatible with the iPad, but not a native app yet).
More FAQs from SBN Seattle: SB Nation iPhone App Frequently Asked Questions.

Direct link for the app

If you have other questions not answered by the video, FAQs and links, please put your feedback in the comments. Most of all, we want to make sure that your experience of Swish Appeal on the iPhone is as good as it is on the computer, so we only make two requests in return for your FREE app:

A re-introduction to Swish Appeal's features:

So with one more way to access the site, I will also to take this time to reintroduce you to some key features of SBN:
Now with all of that, I close with a call to the lurkers - we know there are a lot of barriers to participation, but we're trying to lessen them. So chime in and let us know you're here and who you root for (college or pro).
For more, Jessica Lantz previously prepared a brief primer for the site, that includes a visual tutorial from a fellow SBN site. Please let us know if you have any other questions in the comments.