Share All sharing options for: Tara VanDerveer and Teresa Edwards Join Basketball Royalty in the Naismith Hall of Fame

Two of women's basketball's mavens were enshrined into the finest of all the basketball halls - in Springfield, Massachusetts, the birthplace of basketball. I've walked those halls, reading about the ancestry of the game, the men and women who shaped the history of the sport. People like John Wooden, Henry Iba, Adolf Rupp and James Naismith himself. I stood to stare at the stories about Bill Russell, Wilt the Stilt, Nate Archibald and Pistol Pete. Doctor J, Kareem, Larry, Magic, Barkley, and Michael's legacy drape the halls surrounding the court. Players and coaches that I grew up hearing about, watching work their magic on the court, wishing I could emulate when I was the shortest and probably one of the slowest girls in my class.

And in the class of 2011, two strong women that I watch work today, Teresa Edwards and Tara VanDerveer join the group as two of not only women's basketball's finest, but the royalty that is reserved for the best in the game, regardless of gender. Both shared their early memories of the sport, recognized those who molded who they became as players and coaches and people. They joined their place in the elite and shared their heartfelt thanks to the sport they've made profession at the Naismith Hall of Fame. 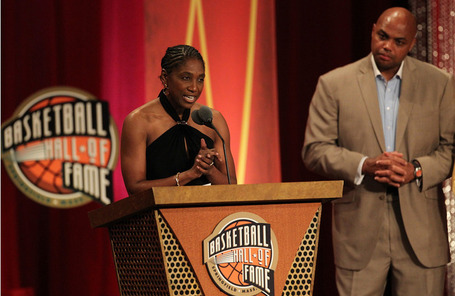 ... "Tonight is about the greatness of the hall of fame and for me it is about the beginning - to no end" ... "Tonight is about the women who played before I came. It's about Lucille Harris, a leader like Lynette Woodard, the All American Redheads, the women who played half-court three-on-three in a skirt game, about the ones that played and we will never know their name. It's about the ones who paved the way, a band of angels that carried me by day" ... "I thank you for molding me Coach (Landers). You took this small-town girl - I'm the oyster that you rinsed off, and I tried to become a pearl" ... "I didn't forget Mr. Stern for providing all the means. It's because of you that we have a homeland filled with WNBA teams, to realilze from here every little girl dreams. Thank you." ... "Oh yeah Doc (Julius Erving), it was you that drove me as a little girl. You were my greatness. And then came my perfection - it was Michael Jordan ... the only thing greater than Michael was God to me. And neither one of them could hold a candle to Mildred Edwards - that is my mom" ... "My mother moves mountains one at a time. She fed us, she kept the lights on, she clothed us with a pocket full of dimes" ... "They called me a competitor that loved to win, but it was this love of my mother that drove me within. Nothing better than making her proud of me and I'd do it over and over again." ... "For all my winnings, the weight of my worth was not my wealth. For all my success, the crowning moments weren't always glory, but after tonight I'm forever changed because you've recognized my name with my game" ... 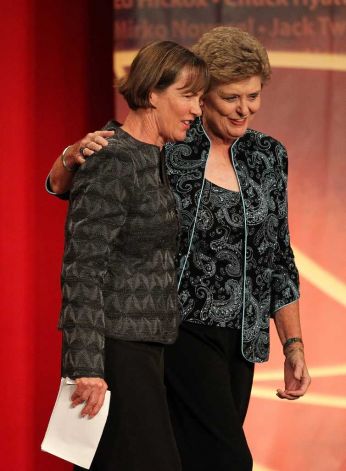 ... "In Malcolm Gladwell's bestseller "Outliers", he challenges the popular self-made woman theory of success. Instead, he contends that success comes from a combination of parentage, patronage, opportunity, 10,000 hours of practice and legacy. Instead of asking the questions what are successful people like, what kinds of personalities talents or intellect do they have, Gladwell says it is only by asking where they are from that can unravel the logic of who succeeds and who doesn't. I am from here. My grandfather was the Director of Recreation here in Springfield, Massachusetts. My parents met at Springfield College ... Our family came to Springfield every Thanksgiving. I visited the Hall of Fame as a young girl ... My parents were thinking basketball right from the get-go" ... "As a young girl, my dad and I would analyze Celtic games watching you, Satch (Sanders). We would diagram their plays and discuss strategy. He would be amazed by this evening because he once told me, 'Tara, come in and do your homework. Do your algebra, basketball will never take you anywhere.' I knew that algebra would never take me anywhere" ... "Gladwell quotes research that says it takes 10,000 hours of practice to reach a high level of expertise. I know I've logged 10,000 hours decades ago. Practice is what I thoroughly enjoy. I'm not sure the players enjoy it as much as me sometimes" ... "The players are who inspire and motivate me every day" ... "I challenge myself daily to give back to the game by being a positive teacher, encouraging mentor and passionate guardian of the game I love. I hope that a young girl visiting Springfield for Thanksgiving will come to the Hall and see Teresa and be inspired to play and she will see me and Jody (Conradt) and all the other women in the Hall and know that she too can have a career coaching basketball. Success is a group project. Thank you family, friends, coaching colleagues, media, administrators, assistants and players for making this possible" ... "Thank you to the Hall of Fame for honoring my life's work. I am forever grateful" ...