Share All sharing options for: LA Sparks 79, Tulsa Shock 74: Snatching Defeat From the Jaws of Victory

On many good highlight reels, you can hear the booming announcers voice say, "and they snatched victory from the jaws of defeat."

Pumped in 'hero' music playing in the background, a quarterback throwing a hail Mary that met its mark, a last second full-court shot to win the basketball game, a hockey game or soccer match that goes to a shootout when it was a miracle to ever get there. You can find these storylines intermingled in the sports fabric all the time. In fact, in this week of the women's world cup, there have been some matches that Ian Darke might have said just that. The last dire minutes of the United States/Brazil match sounds like an apt spot for the sports cliché. And if you were a Los Angeles Sparks supporter, you could use these words tonight.

But on this night, in Tulsa, the words are flipped. Rather, it was a defeat snatched from the jaws of victory through and through.

Press row (not including myself, because I have extreme jinxing capabilities) was frantic with rewrites as the fourth quarter progressed. "Beep Beep is back," was backspaced out of existence on the screen adjacent to mine.

"I think our execution in the half court at the beginning of the game [was the difference]," interim head coach Teresa Edwards said. "We took our game plan early on the attack. We attacked them offensively and put them on their heels. I thought we did a great job offensively executing. Then the first half we did a great job rebounding."

The first 20 minutes saw the Shock build their largest 1st quarter lead (2 points), halftime lead (9 points) and had the fans wondering if the pre-game pow wow worked wonders. Andrea Riley popped in 6-of-8 attempts for 14 first half points in 12 minutes against her former team. Tiffany Jackson added 10 points and seven rebounds. The Shock outshot the Sparks marginally, but had a 24-10 advantage in points in the paint, and picked up nine steals in the first 20 minutes.

"She just had a baby in March, and I keep forgetting that," Edwards said of Riley. "I want to keep her on the floor. She's an exciting player for me. She's heads-up, she's tough as nails, she's very competitive and she's just going to keep getting better. We're just going to keep conditioning her and we hope that she rises to the top as far as a point guard goes. She's a natural two, but she's playing a strong point for us."

Tulsa built an 18-point lead with 6:50 to play when Liz Cambage sunk the back end of an and-1 to put the score at 55-33. However, the third quarter  on the whole wasn't so groovy, but in Tulsa no third quarters ever really are. The Shock was 6-of-16 from the field, and let Kristi Toliver add five points to her total, bringing it to 16 for the game. Jellybean Bryant implemented a zone defense that Edwards hadn't taught her team how to combat yet.

"We haven't put everything in, I haven't really had time to add any zone attacks for this team yet, but they've been focusing and I've been focusing a lot on trying to get the best ability out of our offense so we could score better and that is going well. We just haven't had time.

Edwards continued later, "That zone made a big difference. It made us stand around. I tried to get us to attack and I tried to get Riley and the girls to understand we had to attack the gaps and we had to get the ball in the center, the heart of it. The zone is in the middle and our offense actually is designed to get the ball into the heart but we just didn't look there. For some reason we stood around and passed the ball, so we'll work on that."

But even still, the shock managed a seven point lead going into the final quarter. The zone got stronger and the tide turned for Tulsa.

"I thought that when we went zone, that slowed them up a bit, and probably most importantly for us, we executed offensively," Bryant said of the turnaround. "Earlier, we came down and took some quick shots, but we cut to it 10, and then, we started executing our plays ... Defensively, it is hard to guard them man-to-man, because they attack so well off the dribble. So we switched to zone, and that made a difference in the end."

Missed shots abounded in the 13-point quarter (5-of-16 shooting). Five Shock turnovers led to extra chances for the visitors. The rebounding margin went from +1 to -3. And Toliver and company sunk four triples in the last 10 minutes (10-of-16 from 3 for the night). The Tulsa lead dwindled to a 71-71 stalemate with 3:21 to play as the Sparks finished the last seven minutes on a 16-3 run to take the game. Toliver sunk a dagger of a three with 19.7 seconds to put the Sparks up four and tied a career-high with 25 points. There jaws of victory bit down angrily to dish out defeat.

"She is just a special player," Bryant said of his leading scorer. "That shot that she hit that put us up by four, that's big-time; That's ‘Kobe-esque'. She did a ‘black mamba' on her. And that is the kind of player that she is, and we give her the freedom to take big shots for us."

"We didn't execute. I don't know, we just kind of let it fall apart," Jen Lacy said. "We worked hard for 35 minutes, 32 minutes and then it just kind of fell apart. I think we just got anxious, we could taste victory and it was just - I don't know. We stopped attacking, we settled for jump shots, we got out of our game, that's for sure."

Getting out of the Shock game led to yet another loss - this time unlucky No. 13 - but not for lack of effort.

"My teammates stepped up, they really did, and I think that defines this team," Riley said of herself and her surrounding squad. "It's not just the one person team and it really showed tonight. A lot of people stepped up and hit big shots and I think that our effort was outstanding. I think we still have a little work to do but I think it's come along really well."

"It was tough, it was passionate, it was a lot of heart," Edwards said. But Edwards is counting on more than passion and is confident in her team.

"Heck. I wish we played them tomorrow. We could take this - what they feel now - into the game tomorrow," Edwards said. "If we can get through this New York game with a victory it would give us a great momentum heading over to the break."

Look out New York. Tulsa is ready to chomp down. And this time be on the side of victory. 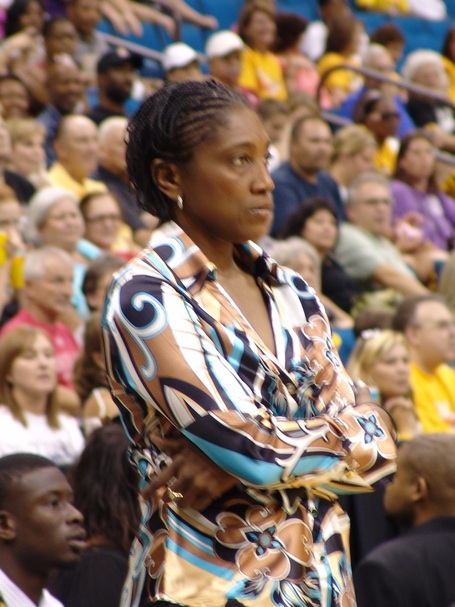 Coaching confidence from the locker room

There is a noticeable change, particularly offensively, with the Shock under the direction of Teresa Edwards. And while the adjustments aren't fully implemented, the differences can be seen by the players in their first game at home with Edwards heading the franchise.

"I'm encouraged ... my girls are really learning fast," Edwards said. "They're learning me fast, they're learning themselves fast which I'm very proud of the fact that they're taking self assessments of themselves and we're putting it into work. We're three games in together and we keep progressing, so as I told the girls after they game, they hear us coming."

Edwards isn't the only one encouraged as the locker room is full of positivity for their new coach.

"We're more fluid, we play together more, we see each other and we try to play to each others' strengths and just try to come together as a team, as one unit," Lacy noted.

"I definitely see that we're progressing," Ivory Latta said, still taking her spot as a cheerleader on the bench as she recovers from a staph infection. "We're getting better as a team and we're gelling. Our chemistry and everything is coming together and it's just going to take just a little time. We've got a new coach in Teresa and I think she's doing a fantastic job. It's all going to come together and it looks so much better, really good."

"I think the difference is Coach T - she just goes hard at you and she brings out the best in you," Riley said. "That makes you want to win for a coach like that and I think that everybody has the same mindset. She continues to have confidence in every single person and it just lifts you up as a person.

"I think she's a really positive mentor to me. She tries to help me in each situation, she really does. I just try to look up to her and listen to her, just have that and bring it to the court. She is - she was a great player and she's also a great coach." 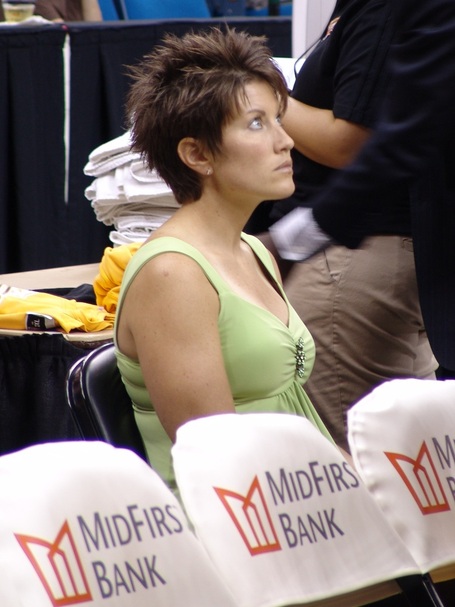 It's no secret that Teresa Edwards is coaching, quite literally, on her own. But Friday, a familiar face took a break from her place behind the commentator mic to sit behind the bench, an assistant of the assistant-less program, if you will.

"We're taking advantage of her until we can get some coaches in place," Edwards said of her cohort behind the bench, Shanna Crossley. "She stepped in big-time, volunteered her time and half of her rehab time to just say, 'Coach whatever you need let me know. I'll get it done'.

"So she got on the horn, helping us scout for this game, she came in to practice today and helped us scout, went over LA's scouting report with us. She's helping me out on the floor the whole game, it felt really good to have her there, have somebody there."

Asked if this could turn into a permanent change for Crossley, who's sidelined this season with an injury, Edwards was quick to dismiss the idea.

"I don't want that for her," Edwards said. "She has made it very clear she's still a player. But I think she's learning the game from a different angle, which is going to help her."

And on the assistant coach hiring process, Edwards is ready to have someone to help.

Having an assistant changes a lot for the head coach, and Edwards knows how much of an asset an extra set of hands, ears and eyes would be at the early stages of her tenure.

"You have [extra] eyes when you have coaches on the bench and a lot of work that can be covered that I don't have to do," Edwards said. "I can focus a lot more on strategy as opposed to fundamentals like I'm doing right now. In time we'll make it happen and this is where I sit and I'm going to make the most of it and I'm going to give it my best shot."