Wishing Alysha Clark Luck In Life Beyond The Silver Stars

Share All sharing options for: Wishing Alysha Clark Luck In Life Beyond The Silver Stars 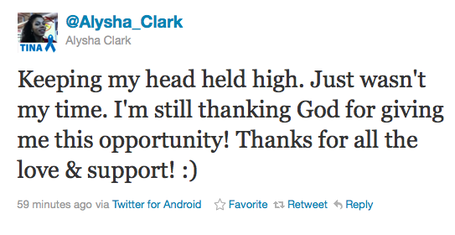 By now you should have figured out that we at Swish Appeal have been rooting for Alysha Clark to make the San Antonio Silver Stars' roster.

From her pre-draft interview last year when she was considered a potential first rounder to her training camp journals this year, Clark is just an easy person to root for who unquestionably has a bright future ahead of her.

Yet in the end, as she tweeted after being waived by the Silver Stars today, this wasn't her time.

But one of the things I personally most appreciated about Clark's journal - and why I think it was such a refreshing addition to on our site - is the way she always managed to keep basketball and life in perspective, even with the looming threat of being cut at any moment as one of the junior members of a competitive roster.

Alysha Clark's Journal: Letting 'Your Inner Kid Take Over" With Roster Cuts Looming - Swish Appeal
We also did some team shooting competitions. What I love about taking time out of practice to do those, is it makes you feel like a little kid again and helps remind you of why you're playing this game. :-) Not that any of us have forgotten, but its nice to just let your inner kid take over. You get all excited inside and start cheering and jumping around ha-ha. And then it's back to business and focusing on the task at hand. I love it!

Clark, like many WNBA players, is not the type of professional athlete who let's the game she plays define her - it's obvious that she's someone with a bright future ahead of her with or without pro sports. However, the way she expressed it here - letting your inner kid take over - is particularly striking: how often do any of us encounter situations where we truly allow ourselves to do that? Moreover, how many of us recognize the value of that and actually seize the moment even as it's unfolding?

Dave Kindred of the Indiana University National Sports Journalism Center once wrote that "If you can watch Brett Favre do his old-man miracles and come away without a question, you are a walking, talking flat-liner." Similarly, if you can't stop and recognize the simple joy of that ability to just let yourself get excited for a moment, then you're probably missing out on a special slice of humanity that makes playing - and to a lesser extent, following - sports so special and might as well be a flat liner.

For me, at least, that supersedes almost any other reason for following women's basketball or any other level of the game - moreso than a distraction, the basketball court has always been a place where I was able to dream and experience those brief moments of joy that I think make life special, even if formal competition ended in high school (or technically grad school intramurals... but... yeah...). Honestly, writing - independent of who reads it or why - is something similar that I enjoy for one reason or another. So perhaps you can imagine how great it is to write with this generally outstanding group of people here at Swish Appeal.

I thought the above excerpt from Clark's piece captured that element of what sports is all about particularly well, even if it is easy to forget in the midst of league-wide roster cuts or among the apparent flat-liner media types who cover the game like "news puppies" covering presidential politics.

We thank Alysha Clark for taking time out to contribute to our site with her roster spot on the line, wish her good luck in the future and hope she continues to drop by from time to time regardless of what she does next.