Before Nate Silver became a writer for the political blog FiveThirtyEight - the blog is named after the number of electors in the electoral college - he was one of the new breed of sabrmetricians, applying statistical analysis to baseball questions. Even though he focuses on politics these days, he recently posted at his blog about America's favorite baseball parks and how to rank them.

His approach was to simply take the average rating of each ballpark from a rating site called yelp.com. Any item whatsoever can be rated on yelp.com, and a user can given a item a rating between one star (low) and five stars (high). Since each of the 30 major league baseball parks have dozens of users rating them, he simply looked at two numbers:

Since he was kind enough to lay out his simple method, I decided to apply the method to the WNBA. I rated 13 WNBA arenas - New York gets a rating for both Madison Square Garden and its temporary home in Newark - and decided to see which venues were the highest-ranking. 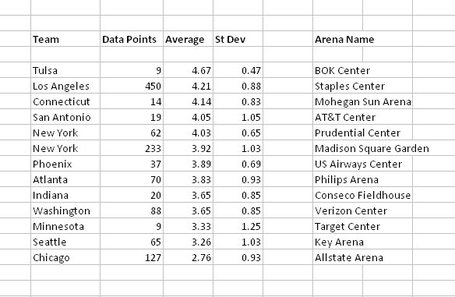 Note the column labeled "Data Points". This is simply the number of persons rating the facility. In some cases, this can be as low as nine people in the Tulsa and Minnesota cases. In the Los Angeles case, 450 people ranked the Staples Center. In statistics there's always the question of how many people you need to poll before you can be sure that the numbers won't change with further polling - this is one of the most basic questions of sampling. I don't know what that number is in this case, but I suspect that its a number greater than nine.

Also note the standard deviations. The Target Center in Minneapolis has the highest deviation - it got three persons ranking five stars, three ranking three stars and three ranking just two. Whereas the BOK center received six five star ratings and three four star ratings. As implied above, those values need to be taken with a huge grain of salt.

Aside from the problem of some arenas not having enough data for an accurate judgment, some of these facilities are multipurpose. An arena can be rated for any event, and not just sports. A person attending a concert at the Mohegan Sun Arena might have a different experience than one attending a WNBA game. Furthermore, an arena might be configured many different ways depending on the event - a hockey configuration might be more amenable to getting to the bathrooms or finding one's seat than a basketball configuration.

In short, there's a lot that this data isn't telling us. But there's also a lot that it is telling us. It appears that the bigger the city, the more likely that its basketball facility will be ranked. Los Angeles has two pro teams playing at the Staples Center, and New York of course has the Knicks. Both facilities have a large number of data points. Furthermore, it's more likely that the overall rating is accurate if there either are both a lot of data points and a high amount of consensus. (There's nothing wrong with a low amount of consensus, however - it might indicate that customer service is hit-or-miss rather than consistently good or consistently bad.)

The Target center is tied for the fewest ratings and has the highest standard deviation, implying that its rating is the most likely to be inaccurate. The Staples Center, however, has the largest number of ratings and its standard deviation is in the middle of the pack, implying that the average rating is very close to the (unknown) true rating. So, until I receive evidence otherwise, I am anointing the Staples Center the Queen of WNBA arenas - at least, until the pitchfork-wielding mob arrives.