I try not to talk about drafts in terms of winners and losers - by the sensationalistic standards on which most people judge draft prospects, the Washington Wizards might have gotten an A+ for selecting a Kevin Garnett/Chris Webber hybrid superstar to lead their franchise into the future with the first overall pick in the 2001 NBA Draft.

Nevertheless, as I looked over this year's WNBA Draft, I just couldn't help but acknowledge one clear winner: Angie Bjorklund.

There wasn't exactly complete agreement among Swish Appeal writers about how strong a prospect Bjorklund was entering the draft, but one thing nobody could dispute is that she had a chance to make it as a spot up shooter as a 6'0" wing with a 45.3% senior year 3-point percentage (not to mention a 41.3% career 3-point percentage playing for the Tennessee Lady Vos).

So that the Chicago Sky drafted her with the 17th pick (5th pick, second round) just seems to be a perfect match. 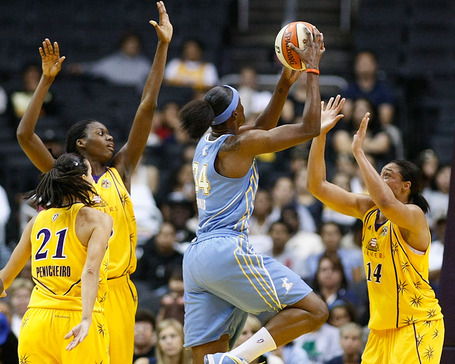 The Chicago Sky's draft should give Sylvia Fowles some room to operate. (Photo by Craig Bennett/112575 Media)

Although many analysts assumed the Sky needed to go big for a complement to center Sylvia Fowles, the Sky used two of their first three picks in the draft on perimeter players in Bjorklund and point guard Courtney Vandersloot (3rd overall). And based upon what actually made them successful last year, that makes quite a bit of sense.

It should definitely not come as a surprise that Fowles was considerably more efficient in wins (64.6%) than losses (53.7%). So it's probably not much of a surprise that all four of the Sky's best 3-point shooters - Shameka Christon, Jia Perkins, Erin Thorn and (to a lesser extent) Epiphanny Prince - shot significantly better from beyond the arc in the Sky's wins. As evidenced by the patterns in their two major win streaks last season, that was more than merely coincidence.

Basketball common sense says that the result of better 3-point shooting is that it has spread the court for Fowles to operate in the paint. Although that has not translated into more shots or an increased usage rate for Fowles over the past four games, it has resulted in 11 more free throw attempts.

Two things happened when the Sky were at their best last season: their guards decreased the rate at which they turned the ball over while their 3-point shooters got hot. With their draft, they essentially reinforced those two areas: Vandersloot adds a historically efficient college point guard to their rotation while Bjorklund (and to a lesser extent Amy Jaeschke) add 3-point shooting.

With Fowles as the Sky's only true interior player, the notion that they should prioritize interior needs over perimeter needs certainly made sense. However, the decision to bolster what made them successful last season given Thorn's free agent status illustrates another way of thinking about team needs in a sport as fluid as women's basketball.

Of course, these four "types" are often nicely aligned with one another. However, it's easy to imagine a team with competing needs that don't point to a single player or so many needs that multiple players could be justifiable "correctives".

There are plenty of times when teams will opt to draft for any one of these types of needs instead of selecting the best player available (for example, my beloved Golden State Warriors have selected Todd Fuller, Adonal Foyle, Ike Diogu, and Patrick O'Bryant over Kobe Bryant, Tracy McGrady, Danny Granger, and Rajon Rondo in their never-ending quest for a big man and I'm not bitter about any of that sordid draft history one bit. Really. I'm totally at peace with it. I swear, primarily because I didn't even mention their worst draft mistake of all-time.). But as tantalizing as taking the best player available might be, an equally strong argument could be made for drafting based on goodness of fit even at the risk of passing on a future superstar - chemistry has overcome talent more than once in the basketball universe.

So with DishNSwish having already done an overview of how well teams are putting pieces together after the draft and yesterday's analysis of which teams got the best draft value, today we take a look at which teams best filled needs in the draft independent of concerns about value. How well teams filled needs will be difficult to determine until these rookies hit the floor, but for now four teams seemed to stand out as more clearly attempting to address needs than others.

Functional needs: Distributors, any interior-oriented players - Fowles is the only one under contract

Although the Sky's negative offensive offensive rebounding percentage can definitely be attributed to their lacking interior presence - and a more dire need with those on the roster last year not under contract - the patterns from their best performances suggested that ball movement and perimeter play were equally important to their scoring efficiency. So while there is certainly room for debate about whether Bjorklund was the best pick available at #17 - particularly with other interior players still on the board - that they were able to pick up two centers in this draft is not bad considering the talent available.

Swords is a highly efficient post player and Jaeschke has college 3-point range, which suggests at least a mid-range threat to complement Fowles in the post in addition to her shot blocking ability. Obviously, there are questions about how effective these players will become as pros, but on paper, they did a solid job of addressing needs.

Perhaps it's clear where the Fever were going with their first round selection of Pohlen as she was a heady distributor by college standards. However, given that people have also suggested that Pohlen might be more successful as a pro shooting guard, perhaps this pick isn't an exact fit for their needs. especially as a team that could have used some help on the defensive boards with a few prospects still available at that point.

It remains to be seen whether the Sparks took the right center: Ta'Shia Phillips could have helped considerably with their rebounding differential whereas Lavender adds a much-needed interior presence at center. However, what's deceiving about the Sparks' statistical profile is that Candace Parker will go a long way to improving upon last year's weaknesses as will their numerous off-season signings. So the need for an interior scorer at center might end up making more sense as a complement to Parker might make more sense.

Was Montomery a bit of a reach in that most people didn't consider her a first round pick? Possibly. But given that they got Breland, who was considered a first round pick, that worked itself out quite well - Montgomery is a solid fit for new coach John Whisenant's and along with Colson gives the Liberty a strong pair of perimeter defenders. Perhaps less important as a team that has Cappie Pondexter and Leilani Mitchell, one of the most efficient pure distributors in the league last season, Colson was also the second-most efficient distributor in the draft behind Vandersloot. Based on who the Liberty have coming back, at least one of these three won't be with the team and with a rumored free agent signing, that could drop to one.