WNBA Draft 2011: Fitting the Pieces Into the Right Puzzle

Share All sharing options for: WNBA Draft 2011: Fitting the Pieces Into the Right Puzzle 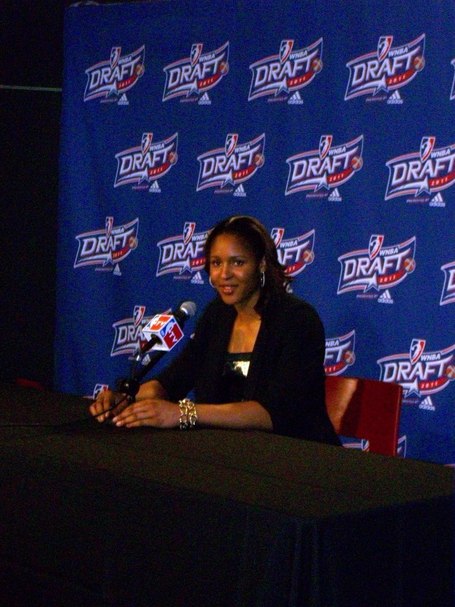 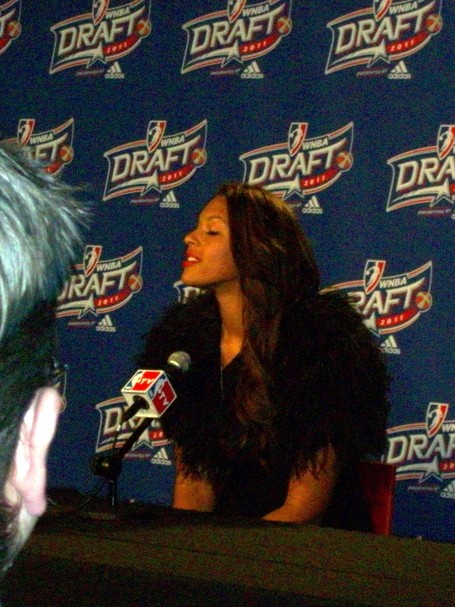 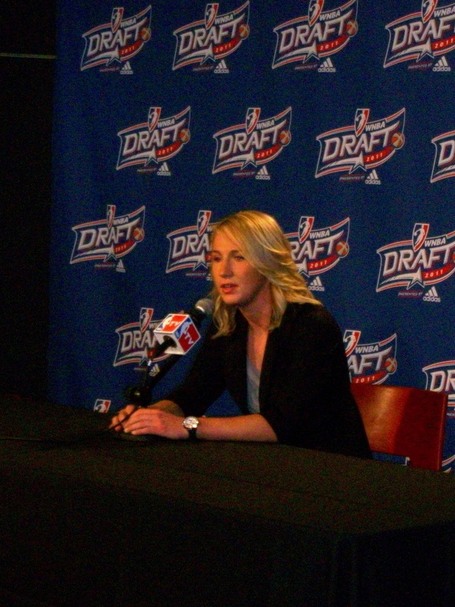 Putting together a contending team in the 12 team, economically conservative WNBA is like completing a jigsaw puzzle.   You need just the right pieces in the right places; nothing extra or frivolous, and despite how much you want to use a hammer to make the thing fit, if the piece isn't right, it's going to make the whole thing incomplete.

As I looked at the 2011 WNBA draft, I really saw the results as attempts to fit those puzzle pieces in the right places.  There is a good amount of talent selected - as well as available for free agent tryouts - but with the league having only 132 roster spots available at this time, things are highly competitive, tough to get and hold onto, but more importantly to the incoming rookies, highly skilled.

In other words, almost every player chosen in this draft, including Maya Moore, will not be necessarily called upon to be "the star" of their team.  They need to perform, but they will be puzzle pieces, trying to complete the puzzle.

So while not giving out grades, because (1) it’s too early to say and (2) I just don’t like doing that, here’s a look at each team’s puzzle pieces.

Maya Moore and Amber Harris are tremendous talents, but with Seimone Augustus, Rebekkah Brunson, Taj McWilliams-Franklin, Lindsay Whalen, etc. all in town, they will be called upon to add to the mix, not dominate it.  Moore will provide more offense on the wing and Harris will solidify a strong post rotation.  The person that may be the most important puzzle piece could be Angel Robinson, the guard from Marquette acquired via trade.  The Lynx have struggled to find a true PG to backup Whalen, and Robinson will fill that need.  Minnesota will be expected to not only make the playoffs, but to challenge for the title, but do you think Seattle, Los Angeles and Phoenix are all going to roll over?  I don’t.

When you’re already the defending champions and have Lauren Jackson, Sue Bird and Swin Cash as stars, and solid role players like Camille Little and Tanisha Wright, what pieces do you need?  Well, Brian Agler, while not a strong user of his bench, knows the need for some depth.  He lost his international bench (Abrosimova, Vesela, and Bishop), but added Belinda Snell’s shooting and defense and now Jasmine Thomas, a combo guard similar to the way Wright was coming out of college.  She will be able to patiently learn like Wright did, and could take some pressure off Wright as she develops.  If the rumors of the Katie Smith trade (for Erin Phillips and a pick) are true, then it’ll be tough to get through Seattle again.

Candace Parker returns, and Jantel Lavender is the true center needed to allow Parker to play more forward, her natural position.   Let’s not forget Aussie sharpshooter Jenna O’Hea and Ebony Hoffman were added via free agency to Tina Thompson, Delisha Milton-Jones and Ticha Penichiero among others.  Lavender averaged double-doubles in college, and here will be asked to contribute on both ends, but won’t be expected to carry the load.  O’Hea’s outside shooting, along with Kristi Toliver, could be crucial to LA’s success though.

Like LA, Phoenix did a lot of their moves via free agency, adding veterans Marie Ferdinand-Harris and Nakia Sanford.    The veteran core of course, Diana Taurasi, Candice Dupree, DeWanna Bonner,  Temeka Johnson and Penny Taylor will dominate the minutes, but the rookie they did draft, Colorado’s Brittany Spears could be a contributing piece.  She is a wing on a team that is short on wings, a scorer (18.1 ppg and decent three-point shooter 33% on 201 attempts).    She won’t get big minutes, but she can certainly add to the rotation mix.

San Antonio is one of two teams in the West that needed to do some shaking up of their roster.  Becky Hammon and Sophia Young are still stars, but age is creeping into their rotation elsewhere.  The addition of Tully Bevilaqua as a free agent will certainly bring some defense and leadership, but her biggest role now will be to mentor #1 draft pick Danielle Robinson, one of the top point guards in the draft.  With Tully and Becky though, Robinson won’t be counted on to take over and run the team immediately, which will be beneficial to her development.  Danielle Adams is an adept scorer in the paint that has made a college career out of proving people wrong.  She is in a great place, close to her old school, and going to a team that won’t need her to be more than a contributing post, while she adapts her game and her physique for the rigors of pro basketball.  She was definitely worth the pick they got her at.  Porsha Phillips, the 3rd round pick, will have a shot at making this team too.  She fills a need, a piece of the puzzle, as a backup small forward, a spot lacking with the injury to Chamique Holdsclaw.

This puzzle was missing the whole outside border of its puzzle, and it found a big piece for the middle in Liz Cambage.  Too good a talent to pass on, even if she takes next season off, Cambage couldn’t be skipped.   Kayla Pedersen is a do-everything forward, on a team that needs a lot to be done.  No pressure on Kayla: Coach Richardson only compared her to Larry Bird at the draft. Italee Lucas’ and Chastity Reed's scoring can also fill needs on the Shock.  This team is still missing a lot of the middle, but the border is starting to be filled in on their puzzle, and they look a lot more intriguing today than yesterday.

Obviously the biggest move the Dream made on draft day was getting Lindsey Harding to play point guard for the Eastern Conference champs.  Even Harding though, is a puzzle piece, as on a team with Angel McCoughtry, Sancho Lyttle, Ericka DeSousza and Izianne Castro-Marques, she will be asked to do a lot less than she had to in Washington.  They almost won it all last year, did they finish the puzzle with that trade?

Coming off a great season, with an off-season full of turmoil, the Mystics are suddenly looking like a different, but strong team to contend in the East, and they added a couple of puzzle pieces with forward Victoria Dunlap and center Ta’Shia Phillips.  Phillips is insurance in case Nicky Anosike can’t play a full season again, and will rebound and defend.  Dunlap thrives on defense and making things happen, and will slot right in beside and behind Crystal Langhorne.  Both can score, but both won’t be counted on for that purpose.   Alana Beard returns, and if Katie Smith yields Erin Phillips to play the point, the Mystics may have a different puzzle than last year, but a complete one nonetheless.

Chicago has shuffled the puzzle pieces around, added a new assembler in Pokey Chatman and a new distributor in Courtney Vandersloot.  They were determined to not let Sylvia Fowles go without a true backup again, and added not one but two strong backup centers in Carolyn Swords and Amy Jaeschke.  With Epiphanny Prince playing well for Chatman in Russia, and Shameka Christon returning healthy the Sky could be a legitimate playoff contender, and all Vandersloot will be counted on doing is what she does best, getting the ball into the scorers’ hands.

I have to admit, I’m wondering how well the Fever pieces are starting to fit together.  Ebony Hoffman has left, as has Tully Bevilaqua, and both were strong contributors.  Jeanette Pohlen is the draft choice here, and Briann January and Katie Douglas are the starters at guard.  Pohlen will be asked to join the rotation in both spots, and hit three-pointers, which she does very well.   The ageless Tangela Smith replaces Hoffman, but she is more of an outside post, which leaves a lot of pounding on Tamika Catchings.  It will be interesting to see if these pieces form a complete puzzle.

The Sacramento Monarchs East conversion continued through the draft.  Alex Montgomery was their first round pick, and seems like the NY version of Chelsea Newton, with some more offense.  Sydney Colson came via trade with Connecticut and is a much stronger defender than Leilani Mitchell, and Jessica Breland will be a solid backline defender.  With Cappie Pondexter and Nicole Powell, all three rookies will just have to fill roles; defenders, rebounders, and distributors.   If Cheryl Ford comes in as a free agent as rumored, this will be a very interesting team.

The Sun are counting on Danielle McCray, last year’s injured draft choice, to be their addition this year.  They also picked up Kalana Greene from NY for Colson, and she will fill a need in their rotation for a wing filled before by Anete Jekabsone-Zogota.  Let’s face it, the trio of Tina Charles, Renee Montgomery and Greene has an NCAA title on its resume, and isn’t a bad start for trying to piece together a playoff team.  They drafted Adrienne Johnson (not the one that came with the Orlando Miracle to Connecticut) and Tahnee Robinson, but both will have a hard time making the team it appears.