Share All sharing options for: WNBA Draft 2011: The Undrafted

At the beginning of the NCAA season when we first looked at WNBA Draft prospects, James Madison guard Dawn Evans was a name that was hard not to consider as one of the top early prospects.

Although we had questions about her chances of being successful in the league as a 5'7" volume shooter, it would have been far fetched to suggest that she wouldn't be drafted at all.

But of course, nothing is a given on draft day and while it's hard to know what exactly led to Evans not being drafted at all, one thing for sure is that her inefficiency as a distributor and scorer probably didn't help her cause. Nevertheless, when looking at players drafted ahead of her it might be hard to think that she just doesn't belong among the ranks of the drafted as someone who most people considered one of the top guards in the nation coming into the season.

So she has to be among the most surprising undrafted players. 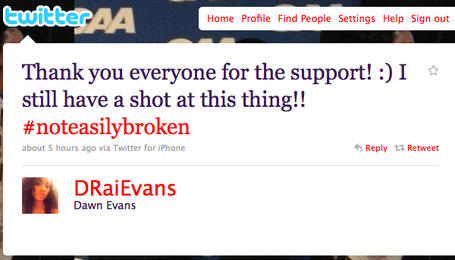 Obviously, shooting 36% from the field, including 316 three pointers, just wasn't what WNBA GMs were looking for this season in a draft that was full of talented undersized guards. The unfortunate thing is that as DishNSwish wrote previously, she was also a product of what her coaches asked of her and her team needed from her.

WNBA Draft 2011 Prospect Capsule: Dawn Evans – "Inspires With Her Courage, Determination & Grace." - Swish Appeal
Dawn Evans isn't particular tall at 5'7, but has shown outstanding leadership skills, and has been the focal point of James Madison on both ends of the court. She has been a "volume scorer" but Coach Kenny Brooks claims that is "his fault" and that her percentages would be much higher if he hadn't asked her to shoot as much as she did, especially when the shot clock was running out. Even though she scored so many points, both Brooks and Evans herself claim she has a pass first mentality, and loves distributing the ball even more than shooting.

Another concern for any guard her size might be defense and so it would be interesting to see what kind of roster would give her a chance.

It was obvious once we started looking at this draft that shooting guard was possibly a weak position in this draft and the fact that only four of those we ranked got drafted pretty much confirmed that. But that the first undrafted player on that list was Lauren Prochaska is a bit unfortunate.

Prochaska was as good a shooter as any in the draft considering how many shots she put up for her team, was among the best shooting guards at creating her own shots, and has the size and length to continue getting that shot off in the pros. It's mildly surprising that a player of her caliber got passed on, but I'll say this: had she gone to a bigger program, shot less, and at a higher percentage, there's a very good chance she would have been drafted. She's more talented than other similar shooters who have made the league simply as a result of the school they chose to attend.

Jones was further down on our shooting guard's list for a reason: it wasn't clear what she's great at - she just does everything at an above average level as the ultimate glue player. However, I made this point before and it seems worth bringing up again now: with no slight to Tennessee's Angie Bjorklund who got drafted #17, Jones is not that much different a player and was a bigger statistical contributor to Baylor than most people assume.

2011 WNBA Draft: How Should We Evaluate The Draft Stock Of "Glue Players" Like Melissa Jones? - Swish Appeal
You'll notice by their points per empty possession ratings that both of these players generally make good scoring decisions, but Jones is quite clearly the more efficient scorer - she has an outstanding two point percentage and very strong free throws produced (free throw attempts divided by field goal attempts). Her assist ratio is in the elite point guard range and at that time Jones was by far the most efficient ball handler in Baylor's rotation.

That is absolutely not a slight on Bjorklund, but perhaps highlights the difficulty of separating prospects from non-prospects.

James Bowman ranked her as 8th among seniors in a previous post and she finished at 12th when all was said and done. I'll quote from that original article.

"Who are the top seniors in women's college basketball?" - The Boxscore Wins Method - Swish Appeal
Another player not seen on many lists. She was named the Big Ten Player of the Year, above Jantel Lavender of Ohio State. She averaged 16.1 points per game for the Spartans this year.

Keane was not a player that any of our writers had going in the first two rounds so going undrafted isn't surprising, but she could certainly make a case for being as good a prospect as some of those drafted ahead of her.

It's unclear as to whether Johnson was ever on draft radars, but like Keane, she is as good or better than some of the players drafted ahead of her and as one of our contributors suggested she might have been hurt by playing in the shadows of others.

WNBA Draft 2011 Shooting Guard Prospect Rankings: Where Jeanette Pohlen Might Fit Best As A Pro - Swish Appeal
Johnson has a nice blend of athleticism and size that make her an interesting prospect. She's a great three point shooter, shot nearly 50% as a junior and shot 44% as a senior. Due to the role she had to play behind Jantel Lavender and Samantha Prahalis, she was limited in what she could show at Ohio State. But the potential to be great was there and she might have been a go-to player on another team. She hit clutch threes but also showed an ability to get to the basket as well, which bodes well. But in order to make it as a pro, she has to get with the right team that's willing to truly give her a chance to not necessarily be the number one option but definitely a second or third.

Of course, as Evans said, all of these players still have "a shot at this thing".