Good Riddance (aka "Time of your life") wouldn't exactly be the way I'd send off Stanford seniors and, in fact, I wasn't even aware that kids these days still listened to Green Day.

But apparently I'm just older and more detached than I thought. 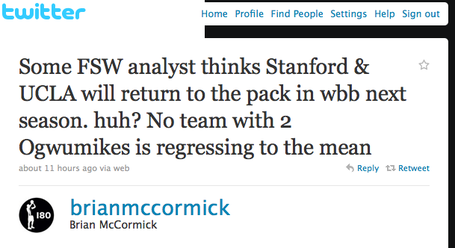 Scott Allen of Rule of Tree has a run down of how Stanford honored their seniors with Green Day, beat Cal, completed a second consecutive undefeated Pac-10 season, and extended their home winning streak 61 games. You can see reactions from Cal and Stanford fans at their respective game threads (California Golden Blogs | Rule of Tree).

With Kayla Pedersen and Jeanette Pohlen leaving, apparently some nameless analyst believes Stanford will fall off a little. I'm with Brian McCormick in his tweet above on this one - the only way to think that is to not be aware of the Ogwumike sisters and particularly Chiney Ogwumike's development over the course of this season.

A couple of other basketball links:

Tough Bruin Defense Cages Huskies In 60-42 Victory - Bruins Nation
Looking at the box score, you'd have to be pretty happy with what you see. Of course, you have to accept the fact that 1) UCLA isn't a 3 point shooting team (1-5 on the night) and that the bench won't provide loads of scoring unless Rebekah Gardner has a big night (15 bench points tonight, 7 from Rebekah Gardner). That aside, UCLA shot a great 48% on the night to a low 32% for the Huskies, while shooting a good (for this team) 76.5% from the freethrow line. UCLA won the battle of the boards 33-28, and more importantly took better care of the ball with 15 turnovers, compared to 23 for Washington off of 14 Bruin steals. Usually pac-10 teams seem to figure out the Bruin press slightly better the 2nd time around conference play, but Washington appeared confused, harassed, and pressured all night long.

After reading the story of how Oklahoma Sooners coach Sherri Coale recruited Danielle Robinson in Jessica's piece on Oklahoma senior night, the first thing I thought of was the video I saw above about a week ago.

It's just a video about her office, but even that has so much character that it's no wonder that a young high school senior would be moved to go from California to Oklahoma to play for Coale.

"For Christmas one year, my assistant coach got me my Hotel California sign because we say once you come here you can never leave," said Coale at the 3:23 mark in the video above. "It's true in a lot of phases and a lot of ways. So, I think about that a lot because it reminds me of all the people who maybe live somewhere else but they're still very much a part of what we do."

Whether the Big 12 conference intended it or not, that video should serve as a pretty good recruiting tool for Coale - her office seems to embody the "family atmosphere" that many coaches talk about.

But while we're on the subject of Big 12 conference videos, I also saw this one about Texas A&M point guard Sydney Colson's career aspirations.

However, the video also includes TAMU coach Gary Blair and you can neither stop nor hope to contain this man's personality.

"She's a natural," said Blair in the video. "She's great on the microphone and everything like that - all the way from being the next Debbie Antonelli to who knows. If I was Walt Disney World, I would hire her right there. You talkin' about someone who could sell Walt Disney, that would Sydney Colson. If I was Texas A&M, I would hire her as a recruitment coordinator for the whole university. If I was IBM, I would have her handling all my public relations."

Blair is certainly never one to undersell his players.