WNBA Draft 2011 Prospects: How Much Better Is Courtney Vandersloot Than Other Point Guards?

Share All sharing options for: WNBA Draft 2011 Prospects: How Much Better Is Courtney Vandersloot Than Other Point Guards?

My friend's maxim that all you have to do to get selected high in the WNBA Draft is perform well in the NCAA Tournament may never be truer than this year's draft.

Thankfully, Gonzaga Bulldogs point guard Courtney Vandersloot might be the biggest beneficiary of that arbitrary standard.

Of course, in Vandersloot's case it wasn't exactly a secret. Perhaps people dismissed Gonzaga Bulldogs coach Kelly Graves' comment about Vandersloot prior to their second round meeting with Texas A&M in Seattle during last year's NCAA Tournament. With all that extended media interaction during NCAA tournament time, coaches are bound to venture into the world of hyperbole when talking about their players, perhaps even moreso if they're a mid-major program that is looking for an opportunity to plug their program on the big stage.

"If there's a finer point guard in the country, I don't know her," said Graves last season. "I think with someone like Courtney, she's a step ahead of the play. She's a step ahead of me most of the time, if you want to know the truth. She sees things that I can't see. She's certainly a special one."

But the fact remains that she was the nation's best point guard before the season, by mid-season, and entering the tournament - the tournament was only an opportunity to reinforce what should have been a given. And Vandersloot was absolutely sensational in her final game in Spokane against the top-seeded Stanford Cardinal in the Elite Eight,

Perhaps the one major pre-season question about Vandersloot is whether she could maintain scoring efficiency while assuming a larger responsibility for the team's scoring load. Part of that, one might have assumed, was staying in attack mode as a scorer while also being the outstanding distributor that she is.

Those questions were answered resoundingly during the course of this season and the tournament was like one big showcase for those who weren't aware of how good she was. In fact, the loss against Stanford was actually a rather routine outing for her.

Against Stanford, Vandersloot used 28.30% of her team's possessions which is just above her 26.79% rate for the season. She had a strong true shooting of 60.56% - including 3-for-5 shooting from 3-point land - and a free throw rate of 33.33%, both of which were close to her scoring efficiency levels for the season (her pre-tournament true shooting percentage was 56.80%, while her free throw rate was 32.02%). But naturally, with her assuming responsibility for 70% of the team's statistical production (45% above normal), her assist ratio was 5% lower than the norm at 29.37%. No problem: committing only one turnover in 38 minutes of play against Stanford's suffocating zone defense was good for a pure point rating of 12.82. As astounding as that number is, it was only marginally above her season pure point rating of 11.63.

In short, most video game player creators wouldn't even allow you to make a player that efficient - to lead a team in scoring and assists for a night is one thing. To do both extremely efficiently is another. To do it for an entire season at about that same level is almost mind boggling.

Yet just a few weeks ago, the very same people who are currently saying Vandersloot is the unquestionably the best point guard in the nation now were pointing to other talented point guards as the best in the country. There have been entire articles written to that effect as well as awards given out that might suggest the same thing. The questions among fans about Vandersloot ranged from Gonzaga's strength of schedule to Vandersloot's physical strength.

But after a Sweet Sixteen full of WNBA draft-eligible senior point guard, people might not be so quick to ask those questions.

And to be totally clear, I love watching Oklahoma Sooners point guard Danielle Robinson play; Stanford Cardinal point guard Jeannette Pohlen has an argument for "most improved point guard of the year" (if there was such an award); North Carolina's point guard tandem is really fun to watch; there are few players quicker than Duke Blue Devils point guard Jasmine Thomas; DePaul Blue Demon's point guard Sam Quigley helps run one of the most disciplined offenses in the nation; and you have to appreciate Texas A&M point guard Sydney Colson's defensive toughness.

Nevertheless, Vandersloot definitely shined the brightest throughout the NCAA Tournament, which should have put any questions about who the best college point guard in the nation is to rest. However, as history has proven in multiple sports, being a good amateur and a good pro are two separate things entirely. And the number of senior point guards in the Sweet Sixteen alone should confirm what we said at the beginning of the season: this is going to be a deep draft for point guards.

So that begs the question: Just how good a point guard prospect is Vandersloot?

My friend's draft-mocking maxim is thus not so much about whether the tournament is valuable or not, but how arbitrary it is to judge all of player's potential on 2-6 games - they've had an entire career. That they got hot for a few games is not that big a deal. The key - particularly with point guards - is watching them over time and getting a feel for their entire game under different circumstances, whether that be a sub-par opponent who they've played 8 times in their career or the best team in the nation.

As a caveat: obviously, when you're dealing with any point guard - from Vandersloot to some point guard with an assist to turnover ratio under 1 - there are intangibles about their college game that can't be measured and about their pro potential that can't be predicted. So the goal here is not to project how good a player will be or even definitively claim that one point guard is better than another. Instead, well-contextualized point guard statistics can go a long way to separating efficient WNBA distributors and scoring guards with ball handling ability.

After the 2009 draft, I looked at the (available) college senior statistics of 38 distributors in the WNBA and the results were pretty clear and pretty simple in terms of separating distributors (in the top 15% of league players in SPI perimeter tendencies with high assist ratios and pure point ratings) from scoring guards:

So for example, when Leilani Mitchell was drafted in the second round of the 2008 draft, most people would not have thought that she would emerge as not only a starting point guard but among the top half of starters in the league as she did this past season. Similarly, most people would not have thought Shalee Lehning would even make a roster, much less earn consideration for a starting job and become among the most efficient distributors in the league.

But for whatever flaws you might still want to point out in their games, both have succeeded and both had the college numbers that indicated success as WNBA distributors.

So let's take a look at the numbers for some of this year's top seniors, using similar numbers to those used previously for WNBA point guards - since I am not aware of where women's college plus/minus numbers are available, I'm substituting that for MEV% or percent valuable contributions. The reason this is a pretty strong substitution is that it tells us how much these players were contributing to their teams in addition to being efficient (e.g. Vandersloot accounting for 70% of her team's production against Stanford). It's not to "punish" players on deep, good teams but to reward those who assume a huge leadership responsibility.

So with that as a primer, a look at the graph of NCAA guards similar to the one used for WNBA players.

The one significant difference between this and the WNBA graph is that the axes intersect at 2.50 on the pure point rating axis to represent that threshold for WNBA distributors and 1.97 on the Chaiken efficiency axis (pts/empty possession) to represent the average of the 38 guards playing in the 2008 season (meaning the 2009 and 2010 draft classes were not included).

Consider this a way to visualize that threshold. 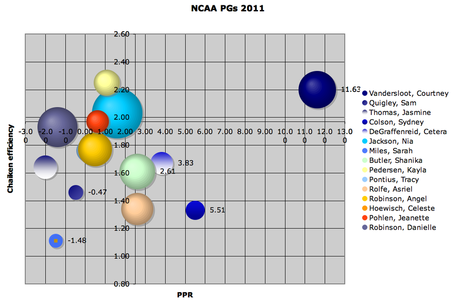 What about the rest? There were enough point guard prospects in the draft that we have deemed this point guard week. A capsule for Vandersloot with interviews from Graves was published yesterday and more will be up daily before we move on to the other positions.