In the final twenty seconds of the game on Thursday night between #12 ranked Maryland and #25 Georgia Tech in Atlanta, the score was tied 53-53, and Maryland had the final possession of the game.  Whatever happened on this possession could decide whether Maryland defeated the Yellow Jackets or were at least forced into overtime on Tech's home court.

As the clock wound down, Maryland looked for an open player, hoping to take the final shot.  Instead, with time working down to two seconds remaining, Maryland lost control of the ball.  The ball was going to go out of bounds and Georgia Tech would have the ball afterward.  Granted, Tech would need a cross-court shot but at least they could secure overtime.  But instead of allowing the ball go out of bounds, junior center Sasha Goodlett attempted to save the ball for Georgia Tech.  She was able to reach the ball, but not control it.  The ball went out of bounds anyway, with Georgia Tech having last touched it.  Maryland would get the ball back at its baseline with three seconds left to play.

The media man near me groaned when he saw this happen.  It was at least the second time this game that Goodlett had tried to save the ball with Maryland possessing the ball under their own basket.  Both times, Goodlett could touch but not control the ball; both times Georgia Tech returned the ball to Maryland's possession.  Being a basketball neophyte, I didn't understand the significance of Goodlett's first mistake until it was explained to me.  It's always good to try to keep the ball from going out of bounds...unless you're under your opponent's basket.  This is when you want to let the ball go out of bounds - and get the ball back - rather than try and fail to reclaim it and inadvertently give your opponent a second chance.

Both those around me and head coach MaChelle Joseph characterized the mistake the same way - as the kind of error that one makes in grade school and grows out of, usually after the sting of embarrassment and the chastisement of one's coach/teammates/crowd.  (As I had never played the game, I had assumed that one would want to save the ball in any circumstance.)

With three seconds left, Maryland had the ball.  But could they score?  Maryland junior guard Kim Rodgers and junior forward Alyssa Thomas explained the play after the game.

"I knew I was the second option.  Before when we set the play up, we actually had [junior guard] Lynetta [Kizer] and I switched, and Lynetta said, 'I think Kim should go to the corner' and it ended up working.  I knew that if Alyssa didn't get the ball I was going to get it so I just had to be ready."

"The plan was definitely to get to me," Thomas said, "but with the defense sucking in on all of us it gave Kim a wide-open shot."

Georgia Tech head coach MaChelle Joseph explained what went wrong.  "We said all night 'don't help off of 22 [Rodgers]'," Joseph said.  "It's the only 3-pointer shooter on the floor, and that was her first three of the night.  We never said 'come off of 22'. Trust me.  What do I tell them every single day?  It's when they in-bound, If you're not touching somebody, you're doing the wrong thing.  So obviously they weren't touching somebody, so they did the wrong thing."

Rodgers was now all alone on the wing.  If you go to the University of Maryland women's basketball website and hit the TerpsTV application, you can see the results.


With the ball in her hands, she fired up for a three pointer and the ball sank through the hoop as time expired.  Final score: Maryland 56, Georgia Tech 53.  The game had been tied for sixty-five seconds until that final shot, the one that put the Terrapins on top.  (The only other team to beat the Yellow Jackets at home this year?  UConn.)

You know a basketball game is good when it makes you think. The importance of Goodlett's goof made me think about turnovers and the box score.

According to Wikipedia, there are multiple ways a team can be charged with a turnover:

a.  The ball is stolen from the player in control of it.  The team is charged with a turnover and the opponent who takes control of the ball is awarded a steal.
b.  The player violates the boundaries of the court with the ball.  Either the player steps out of bounds or throws the ball out of bounds.
c.  A moving violation is committed such as traveling, palming the ball, a double dribble, etc.
d.  The player's team commits some sort of offensive mistake, either an offensive foul, or some other kind of violation.

Out of all of these various ways a team can be charged with a turnover, only one - having the ball stolen - usually involves the defense.  In all of the other ways listed above, the offense commits some kind of mistake where the officials award the ball to the defense.

This has led some basketball statisticians to consider the concept of an unforced turnover - one credited entirely to the offense.  The consensus seems to be that an unforced turnover occurs either when the ball is stolen or when a bad shot is forced during an on-ball screen.  Since I don't have statistics indicating every on-ball screen bad shot for the teams in the ACC, I'll have to make due with a metric called "unforced errors".


In short, we're removing every turnover that can be accredited to the defense and giving the offense credit for what it does...wrong.  My next question was to determine which ACC teams had the highest rate of unforced errors: 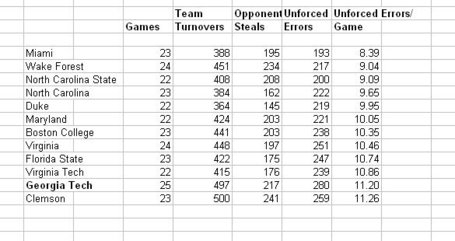 As you can read, Georgia Tech is the eleventh team out of twelve - only Clemson is worse.  The correlation between opponent steals per game and unforced errors per game is virtually zero, which implies that unforced errors/game is to some degree opponent independent

How much do unforced errors/game matter?  It really depends on the difference between your team and the other team.  Georgia Tech might concede between 1 and 2 points per game on unforced errors.  In this case, one could argue that they conceded three points. 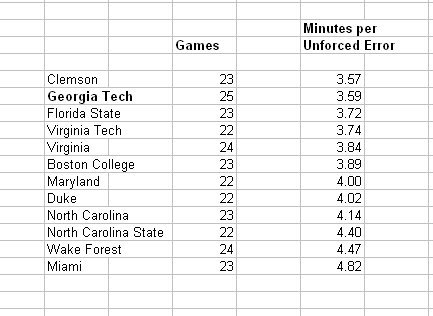 So on the average, the Yellow Jacket commit an unforced error - they step out of bounds, they travel, they commit a 3-second violation, etc. - every 3:35 minutes.  Maryland does the same thing on the average every 4:00 minutes.

The next question would be - how are these errors attributed?  Who is to blame for these errors?  Attributing blame to players is easy in Goodlett's case above but is difficult at other times.  A team that depends on passing is going to throw a number of passes out of bounds.  A good point guard will have many unforced errors.  Anyone handling the ball a lot will have many unforced errors.

Is it coaching?  Was it MaChelle Joseph's fault that Georgia Tech lost?  There's only so much influence over what a coach can make players do and Joseph can scream "don't try to save the ball on the opponent's end of the court" until she loses her breath, but if the players don't internalize it, it's wasted breath. I long to hear the magic words that Marynell Meadors will say someday that will prevent Iziane Castro Marques from attacking three defenders single-handledly with the ball.  If Meadors doesn't know those words, how is Joseph supposed to know them?

"You don't throw the ball back in under your opponent's basket," Joseph said.  "I mean, that's something that I shouldn't have to yell from the bench.  Two seconds on the clock, you out-of-bounds the ball...it's mental mistakes, it's little things.  And one of the things we have to do is get mentally tougher."

Is it the style of play?  Maybe.  Pressing for forty minutes is a high-intensity activity.  Maybe a player's brain is more prone to lapses the deeper one goes into the clock.  Georgia Tech's players are superbly conditioned; players who don't play a set number of minutes are usually required by Joseph to lift weights after the game.  Until each player wears a medical monitor during game play we'll never know the answer.

More than likely, the error that doomed Georgia Tech was not the one Goodlett made.  Rather, it was on the final play, the Maryland inbounds play when Georgia Tech as a team left Rodgers out in the open.  And even then, there was a 76 percent chance - based on Rodger's 3-point shooting - that the game would have gone into overtime off a missed shot, because when the ball got to the rim time had expired. Even so, Georgia Tech learned the lesson that lapses in judgment can haunt you, and there's only so much time left in the season for Georgia Tech to learn from its mistakes