The Pink Whistle at the Blake Memorial Tournament

Share All sharing options for: The Pink Whistle at the Blake Memorial Tournament

The weekend assignment called for officiating in the Mike Blake Memorial Tournament in Northern New Jersey. It is well organized event with boys and girls competition from grade 4 through 8. And it honors the memory of a special youth basketball coach who was passionately devoted to the game and the kids he coached.

The luck of the draw had my assignment on Friday night at Upper Saddle River for three games, all girls contests.

A seventh grade meeting. A good number of these Fair Lawn players will move on to Fair Lawn High School in the near future. That happens to be the school where Hubie Brown got his start as a high school coach before moving on to ‘bigger' things.

Working all three games with officiating friend Bill Finnegan - he does a good job and we have worked a number of times in the past. That helps as you know your partner's traits and style of game he favors.

Both teams are pressing full court so we get a virtual foul fest with little or no flow. Fair Lawn leads early but the pressure they exert is allowing transition opportunities, getting them in foul trouble and putting USR on the line.

The home club enjoys a strong second half en route to the victory.

A sixth grade game. Wayne had a number of teams on varying levels. This one in particular is having trouble with Midland Park's size. One player in particular, is big enough to secure offensive rebounds and is in possession of a soft enough touch around the basket to convert.

Another key player for Midland Park is a guard number 12. She makes very good decisions for a player at this level and when needed, can break down the defense, get in the lane and finish. She really did an impressive job.

It is always interesting to hear the teams coaches name their plays after. UCONN, even with Rutgers our state university, is very popular. Interesting to hear an 'Oklahoma'. Wayne had a play 'Tennessee'. Two passes were made before a three pointer was attempted. Don't think that's the kind of set Pat Summitt would sign off on.

A seventh grade meeting to wrap up the night. And that is Oakland, New Jersey. The tournament is attractive but not luring teams to fly cross country.

Oakland actually gets out to a 10-2 lead. Gradually Wayne gets back and wears them down. Wayne has two players with good size in the 5-11 range. They both handle the ball, run the floor well and can put it on the floor.

The second half is all Wayne as they roll to a convincing win. Post game, a few players come over to say 'nice game', 'thank you'. Three are from the losing club Oakland and they add high fives to the 'thank you'. Always nice to hear good things from the players and coaches but special when it comes from a team winding up on the short end of the outcome.

Allendale, NJ - Arrive a little early while a fifth grade game is in progress. A disturbing thing catches one's attention. The two officials are walking the floor barely even covering the play. The body language suggests ‘let's get this over' attitude.

We as officials make mistakes. So do coaches and players. But as officials, hustle and an honest effort should be job one. At halftime I touch base and say hello. One official comes out and says "I hate girls games. They can't play." That statement floors me. I think of the SA group as Nate, Queenie, Jessica, James et. al. blowing a collective gasket over that one. After talking a few minutes I walk away thinking, do I have a story.

Simply, it comes down to this: if you ‘hate' girls basketball, do not officiate their games and pocket the $35-50 game fee. Watching this game it, like a few last night, was not an artistic gem. But the kids are young, they are learning and they should get your best effort. Nothing less.

Site manager Kathy, whose games I have had in some of her recreation contests, says hello then informs me the first of my two games in cancelled. We have about an hour wait until the 1:30 game so a lot of it is spent discussing the tournament and basketball in general. The ‘gospel' of SA is spread to Kathy who was interested in hearing about my opportunities and experiences in covering the NY Liberty this past Summer.

By 1:30 the teams are warmed up, ready to go. My partner, Vic James, is a football man who coached as an assistant in college. I've worked with him before and while football is a passion, he enjoys his basketball and works hard on the court. Introducing himself to Kathy, she says "Rick James." To which he quickly replies, "no it's Vic James, I'm not super freak (referring to a Rick James 80s hit)."

Fair Lawn presses but shows more zone than last night in this seventh grade get together. Allendale zones and early on negates Fair Lawn down the floor with a few transition baskets. The host team is doing a nice job and right there at the half.

The final 16 minutes saw Fair Lawn's size take over. Allendale struggled from the perimeter against the zone. Fair Lawn controlled the boards and on offense a number 14 finished strong. She's a post player about 5-10 with good foot work and moves inside. Last night she struggled to finish against Upper Saddle River. Today she's cashing in on those opportunities, especially the second half. Fair Lawn goes on to win.

On the way out I get two red velvet muffins at the concession. They were delicious and I found out an 8thgrade player from Allendale baked them with her own recipe.

Just another reason to absolutely LOVE girls, and women's basketball.

Upper Saddle River, NJ - The 'luck' of the draw continues. The schedule calls for two finals, 6 and 8 pm. they are both girls contests. Game one...

A sixth grade game with a solid partner in Mary Ann Conboy. The first half gives us a nice pace and tempo. In the championship team you have the best two clubs and they are proving it with a competitive effort on the floor. The number 12 for Midland Park, so impressive Friday night, is having her penetration stopped. A heady player she adjusts with a variety of pull up jumpers in the lane.

A close game is settled in the latter stages as Oakland finds the mid-range jumper available against the zone and converts. Defensively, Oakland did a nice job neutralizing Midland Park's size up front.

Awards are distributed. There are about 45 minutes until the next game. Grab a flavored coffee at the concessions and go to the other gym to watch and say hello to fellow officials. Ask the site manager to contact our coordinator Glen Mezzatesta find out who my partner will be for the game at 8 pm. Glen notes it will be Pat LaRezza, another good official I enjoy working with. 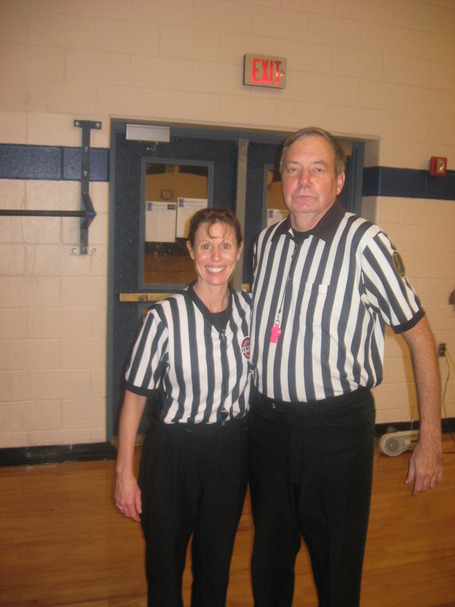 Standing with partner Pat LaRezza after the fifth grade final.

The fifth grade girls championship and last game of the night. Upper Saddle river leads most of the half until Midland Park closes with a 6-0 run, including a buzzer beating jumper to enter the half ahead by two. Championship game intensity shows the second half.

On a free throw, a player has her foot over the line. Usually in fifth grade ball that is permissible providing the shooter doesn't run into the lane. One coach wants the violation; the other said all weak shooters were allowed over the line. We meet with the site manager who rules, 'high school rules are in effect' - therefore, a violation.

Early fourth quarter during a time out, the Upper Saddle River scorer gets up from the scorer's table telling me I blatantly missed a free throw violation. I patiently explain as a scorer and a member of the scorer's table he is an extension of our officiating crew. And our crew will not have dissension. Case closed.

On the floor, number 10, a shooter with a nice smooth stroke, of Upper Saddle River buries three treys in the stretch. They provide the difference in the outcome. Post game, girls from both teams come over to Pat and I to say thank you for officiating. Always a nice touch.

Pat and I exit the gym. On the way out a stop at concessions reveals they are out of flavored coffee. Probably the only disappointment of a rewarding weekend of girls basketball.