Appreciating The Minnesota Lynx Frame-By-Frame: What 'Synergy' Looks Like In Action

The Minnesota Lynx' "3 Clear" play in Game 3 of the Western Conference Finals vs. the San Antonio Silver Stars.

The other day I wrote an admittedly "pinheaded"* post describing the concept of "synergy" as a metric that describes how well a team shares the ball and in turn what makes for the most entertaining WNBA basketball.

Feel free to read it now if you're bored and in a statistical mood, but the main point is that when we talk about "how well" a team shares the ball we're essentially looking for three things: ball movement, moving the ball to set up efficient scoring opportunities, and avoiding mistakes.

Today I offer an example of what all that statistical mumbo jumbo actually looks like in action, with the help of the Minnesota Lynx play provided by Fast Model Sports in the video above.

Fast Model Sports laid out diagrams and the step-by-step process of this play called "3 Clear", which serves as a great guide to understand what's going on in the video above. But there are a few things that make this particular set work so well for the Lynx, beyond the matter of just being "talented" or deep. 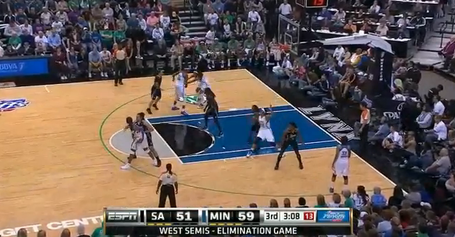 There are a few things going on in this first frame. The first thing to note is that there isn't a center in the league you'd rather have in that position at the top of the key with players in motion.

Taj McWilliams-Franklin creates assists at the second highest rate of any center in the league (19.20%) and is the second most efficient center at making plays (0.10 pure point rating). I'm not going to derail this discussion by making a comparison to the player ahead of her, but suffice it to say that knowing that she's a threat to make plays makes the difference in this set - there are threats all over the court.

They're playing this to the left side looking for Candice Wiggins to come off that Rebekkah Brunson screen (that she actually missed). Wiggins coming around a screen to the three point line is a threat as she was a 39.5% three point shooter (13th in the WNBA) this season. Putting Seimone Augustus out in the right corner - 41.7% three point shooter - forces the defense to leave room in the middle of the court. In this case, that left room for Maya Moore to post up Danielle Robinson, which may not be a first option for the Lynx but isn't exactly a bad option either.

During the regular season, Moore shot 62.9% from the 1-5 foot range, which was good for third among small forwards. That went up to 68.4% during the playoffs. That comes with the caveat that a lot of those for Moore come on layups or cuts to the basket, but on a smaller player there's little doubt that she's a threat which sort of prevents Augustus' defender from committing either way. But before judging Moore on the hype of her rookie season, it's worth noting this as a major potential growth area: as she develops as a player, just that she has the ability to finish at the rim will make her an even bigger threat down low.

In any event, McWilliams-Franklin is not at all in position to make that play, but what unfolds still poses problems for the defense. 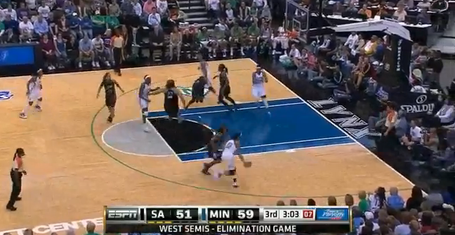 The end of the play is where you see the payoff of all of that previous motion: right here you notice Moore with a wide open lane to drive with Brunson simultaneously curling to the basket wide open. That was made possible by Augustus' clear out and screen on Brunson's defender, which is what made this play turn out so beautifully for two reasons.

Before lauding the Lynx for their selflessness, Lynx fans should probably take a moment to appreciate watching Moore venture into the paint off a drive. It's not actually she's done that often this season, despite the earlier point about her relatively high percentage shooting from that range. But it's something she's improved dramatically as the season has gone on and we're starting to see how dangerous she can become in the playoffs: through 6 playoffs games she's gotten to the free throw line at a rate of 36.76%, up about 15% from what it was in the regular season.

This particular play shows how much more dangerous the Lynx are with Moore's willingness to drive as she finished with a layup and a foul - she's already a potent scorer largely settling for jumpers and they're obviously more dynamic with her getting more comfortable. But on a broader level, it's also an example of how players complementing each other in their roles - not just "being talented" - is what makes this team great.

In this play, Augustus - an All-Star and member of the All-WNBA second team - is "just" playing a role as screener and, for a moment, decoy as she demanded attention as Moore popped out to get the ball on the wing. Yet there's little doubt that her "small" role was essential to making this play work. Similarly, it's fitting that Wiggins was in the game for this example and not All-WNBA first team starting point guard Lindsay Whalen - Wiggins didn't have to do much except initiate the play and swing the ball at the right time when Moore got open on the wing. As she's shown this season with a positive pure point rating (0.18) she's also capable of filling that role well enough to make this sort of play work.

Best of all, is that this entire play with all that action only required 6 dribbles from the time Wiggins crossed half court to Moore taking a long stride to finish. There are teams that use up 6 dribbles before they're even into the meat of their offense, including the Lynx when Whalen is in the game looking to create something on the fly. That's outstanding execution, minor mistakes notwithstanding, against a normally solid Silver Stars defense.

Granted, it's probably not hard to notice where the Silver Stars made significant mistakes, particularly in how they responded to screens. But rather than harp on that, I'd again re-direct to what that says about the Lynx: who do you focus on if everybody is in motion but not wasting any motion? Even the players just playing roles are significant threats to make plays and when they execute plays that well, the very presence of those threats can completely disorient a defense which in turn allows Moore to make that play.

When I say this team is perfectly constructed, this is essentially what I mean - as good as Whalen was statistically as a MVP candidate, they don't necessarily have one dominant player statistically because the unit is always better when they force a defense to make choices. At the same time, what we saw in the fourth quarter in Game One of the 2011 WNBA Finals against the Dream was a team that can also do the exact opposite and have any number of individuals make big plays. Then they can also defend and score efficiently in transition with Brunson able to run the floor so well and both a number of players capable of distributing the ball.

They have the luxury of waiting to pick and choose spots when opponents break down in any phase of the game, they have players smart enough to capitalize beautifully, and so they're more clinical than dominant, which somewhat paradoxically makes it hard to appreciate how dominant they really are when they're at their best. It's not just talent, it's complementary talents that make each other better when they're playing off each other.

To bring it all back to the original point, this is what synergy looks like: when they share the ball, they disorient the defense, find higher percentage scoring opportunities and are beautiful to watch as a unit.

A friend of mine describes the best of WNBA basketball as "geometric": a game where success is determined not by one-on-one ability, but symmetric balance, collective navigation of space, and precision use of angles. Some people might say that makes the WNBA more "pure", but the best NBA teams (most notably the champion Dallas Mavericks and San Antonio Spurs in the last decade or so) do the same thing. The difference is just the balance individual vs. collective play - as exemplified by 3 Clear - is a bit different, with the WNBA relying a bit more heavily on that collective play on the whole.

So when said friend essentially pointed out that my synergy post was pinheaded, I used that concept as a frame of reference: what makes the 2011 WNBA Finals so exciting is that the Lynx are really "geometic" and the Dream are really fast, which helps them disrupt geometric play.

That, in part at least, is why I want this thing to go five games.

*This is not pin-headed in the conservative pundit sense of the term, but in fact that opposite, both in definition and political bent. A grad school friend used it occasionally to differentiate esoteric academic writing from writing that a real human being can understand. The example that will always stand out is when I told him I was (re-)reading How Capitalism Underdeveloped Black America and he immediately responded by recommending Adolph Reed, Jr.'s Class Notes while commenting that, "Marable can be so pinheaded sometimes." Indeed, Reed's text was far more concise and clear, something I should take note of in future posts.