The 2009 WNBA Finals was widely considered the best WNBA Finals ever due to a combination of drama, an underdog pushing a favorite to the limit, and the traction it gained in the mainstream.

On the court, a lot of what made that series exciting was the contrast in styles: just to draw on the basic storyline, 2009 MVP Diana Taurasi and league-leading scorer led the Phoenix Mercury against 2009 WNBA Defensive Player of the Year Tamika Catchings and the Indiana Fever's top-ranked defense.

The 2011 WNBA Finals won't provide nearly that same type of contrast, but should be extremely exciting in its own right.

While Minnesota was both the second ranked defense and offense during the regular season, Atlanta has made dramatic improvement over the course of the season and been the stingiest defense in the playoffs and second-ranked offense. In further contrast to 2009, 2011 doesn't showcase the uptempo (Mercury) vs. downtempo (Fever) matchup that we saw in 2009 either - both of these teams like to run and thrive in transition finishing second (Atlanta) and third (Minnesota) in the regular season in fast break points.

So this begs the question, could the 2011 WNBA Finals be even more exciting?

Of course, "potential entertainment value" is a tough thing to measure much less anticipate prior to a game even being played. For example, as a San Francisco 49ers fan, I take great pleasure in watching the Dallas Cowboys lose as often as possible (it's a sickness, I know). Conversely, any time the Golden State Warriors lose I am likely to tell you the game sucked.

But the WNBA Finals is also one of the biggest advertisements for the league - it's on national television, it'll get a boost in media attention, and with a NBA lockout still going it's conceivable, though not by any means a given, that a few extra NBA fans might check it out. And it's a bit easier, in my opinion, to figure out what a general basketball fan might want to see from the WNBA.

And it's not defense, though that will be a feature of this series.

At about mid-season, I mocked up a 2011 WNBA watchability scale, an idea I stole from Kevin Pelton and Tom Ziller who had made one for the NBA.

I decided to simplify it to two things that typically make for entertaining WNBA basketball games: how fast they play and how well a team shares the ball offensively. Although star power is represented, the premise of valuing teamwork is that the WNBA is more predicated on ball movement than one-on-one play. Even on teams with outstanding one on one players, the best basketball involves players moving the ball around to set up those shots (really NBA or WNBA).

So here's the final scale for the 2011 regular season: 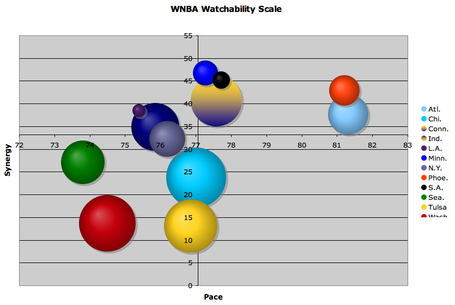 Both pace and synergy are more descriptive than explanatory metrics, meaning that they describe the character of a team's performance - how well the shared the ball or how fast they play - rather than explaining wins and losses. For example, a team can win without sharing the ball well by having a dominant individual performance or turning up the defense and scoring off turnovers in transition. Conversely, a team with high synergy can lose if they commit turnovers too often.

So what makes this series potentially so entertaining is that we'll be getting a series that features the teams that best exemplify what are arguably the most entertaining aspects of WNBA basketball.

However, as briefly described at SBN Seattle earlier this year, I made an adjustment to synergy for the purpose of this watchability scale and it's worth a closer look in advance of these Finals.

People often talk about how well a team shares the ball in terms of assisted field goals - the percentage of shots that involved an assist from a teammate - and all synergy does is add an extra measure of quality to that by adding a team's shooting efficiency or effective field goal percentage (click here). It's more helpful, in theory, to know how well a team is able to get the ball into the hands of players with high percentage scoring opportunities than just that they're moving it.

But a mid-season game between the Phoenix Mercury and Seattle Storm illustrated the flaw in that metric: the second quarter in Phoenix on July 26 was among the sloppiest I watched by two teams this season.

The Storm turned it over on about a fifth of their possessions in the first half, which was beginning to become commonplace at that point in the season. The Mercury turned the ball over on about 30% of their possessions, went 0-for-5 from three point range, and shot only 37.5% overall. It wasn't the worst quarter ever, but also not a profile of two teams sharing the ball "well". And yet both the Mercury (1.04) and Storm (1.17) had solid synergy ratings in the second quarter and elite ratings (1.28 and 1.22) for the first half - for perspective, the Los Angeles Sparks finished the regular season with the league's highest synergy at 1.13.

It's not that I hadn't noticed this prior to that game (or this season) but it just got to a point where it didn't seem to reflect what it was supposed to. And the problem seemed to be that synergy doesn't account for turnovers.

So another way to think about team poise and ball control is obviously assist to turnover ratio, which is something I don't use often at the team level but became useful to think about for this purpose. With that in mind, I thought about John Hollinger's pure point rating formula, which weights assists as 2/3 as valuable as a turnover (click here for more on why one might weight assists lower).

So the adjustment I made to synergy for these purposes was to put that pure point rating assist formula over field goals made: (league pace/team pace)*(2/3 assists - turnovers)/FGm + eFG%. The results are as follows, with comparisons to other numbers.

Clearly assist to turnover ratio seems to work well as a much simpler proxy for adjusted synergy, which is interesting to note. But what's interesting about this sort of descriptive composite rating is that it gives a quick glimpse at a team's total profile, in this case with an emphasis on how efficiently a team shares the ball. Again, a team's points per 100 possessions is going to better explain outcomes because it tells you how efficiently a team scores points. But synergy does says enough about how well a team shares the ball to score to be useful.

So that brings us to Minnesota, the highest adjusted synergy team in the WNBA this year, and what makes them a great team. Their balance makes them an extremely difficult team to play against because you can't really focus on one thing to take away. With a point guard like Lindsay Whalen, they have someone who identifies open players and gets the ball to them as well as anyone.

But here's the other thing about the Lynx: they're capable of remaining efficient playing a faster pace than they have in the playoffs - they've been three possessions slower during the playoffs (76.6 possessions per game) than they were during the season (79.91 per game) putting up 110.70 points per 100 possessions. Even if they got less efficient playing faster, it's unreasonable to assume they couldn't hang at a faster pace.

Even more interesting though might be the defensive end: the best use of synergy is to compare it to a team's average. As little explanatory power as it might have on its own, holding a team beneath their average synergy is indicative of a strong defensive performance. Furthermore, having a higher synergy than one's opponent - meaning you shared the ball better at a given pace - is a pretty strong formula for success. So the Dream's playoff performance is more noteworthy than their regular season numbers.

What stands out about the Dream's playoff performance is that they've been extremely effective - and improving - at limiting opponents' ability to share the ball well. Meanwhile, the Lynx have thrived on their ability to share the ball even against a solid defense like the Silver Stars. That sets up a dynamic in the Finals in which something has to give, yet it's not entirely clear what will give: as much as the Lynx have to figure out how to continue to execute against a strong Dream defense, the Dream also have to figure out how to defend a Lynx team that is so balanced that they simply don't allow opponents to focus on taking away one thing.

So rather than being the type of series won by the team that best takes away another team's strengths - which can result in ugly basketball - it's more likely that the series will feature two teams playing their best basketball with the winner being the team that's able to execute more consistently. Both teams are likely to have moments where they're able to impose their will. And that could make for far more exciting basketball than the type of contrast we saw in 2009.

Even without any neatly contrived storylines, this could just be a display of great basketball that any true basketball fan could appreciate.

Sometime between the initial release of the 2011 playoff schedule and now, ESPN chose to switch Game One of the WNBA Finals from ESPN2 to the main network. That's not necessarily a big deal on its own for most viewers, but it does hold some significance - since ESPN rebranded "the Deuce" in 2001, that's where it has stashed its WNBA coverage.

The reason for the switch this season probably more to do with the potential marketing draw of Lynx rookie Maya Moore on the Husky network, but the expected entertainment value of this series makes the decision a good one.