In the last game ever to be played in Anderson Arena between 1-75 North rivals, Bowling Green and Toledo took the floor for what would be an epic battle.

Not only was this game for bragging rights but also for who would stand alone atop of the MAC conference. Also on the line was Bowling Green's impressive 23-game home winning streak at Anderson.

And that context makes Toledo's 66-65 win all the more impressive, despite what might appear to casual fans to be a surprise - Toledo took the fight right to Bowling Green in what ended up being a classic. 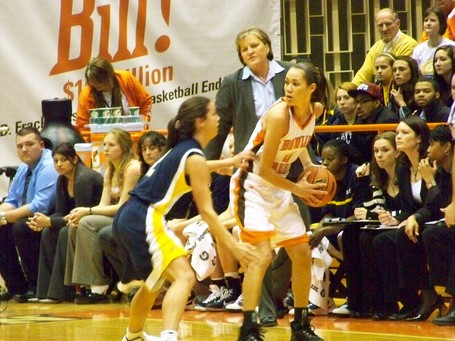 Bowling Green got off to a very slow start and that was attributed to the stifling defense of Toledo, which is first in league contests in scoring defense at 54 points per game and field-goal percentage defense at 33.2%.

"I don't think we were tight, Toledo's defense is that good, they are really up in you," said Bowling Green coach Curt Miller. "We couldn't slow down enough to execute early on, that's a disappointment but that is strictly because of their defense, their defense is fantastic, fantastic and physical."

"We talked about when we came into [the game]," said Miller. "I had been referring to Toledo's defense as they're the Steelers of Mac Women's Basketball - they're physical and they win a lot of games because of their defense."

Suffice it to say, Toledo's game plan from the outset was to use their suffocating defense to slow down the potent offense of Bowling Green and arguably the best player in the MAC, Lauren Prochaska (11 points). This approach seemed to net a very positive result as they built a 17-6 lead early on over the favored Bowling Green.

"It took our whole team to stop those kids, that's how good they are," said Toledo coach Tricia Cullop. "We challenged them with a way to guard them tonight and it really did take all of the people surrounding those screens for the defense to be effective. It was a tremendous defensive effort from our team and I thought for the most part, I thought we stayed focused for the whole game."

But as typical with any Bowling Green team, their mantra is to fight and fight back they did. By halftime, Toledo who had once been pulling away was only up by six with the momentum clearly back on the side of Bowling Green.

With Bowling Green having seemingly all of the momentum coming out of halftime, it seemed that it would only be a matter of time before they took complete control of the game. But Toledo point guard Naama Shafir (21 points) just wouldn't let Toledo falter amongst the mounting pressure coming from Bowling Green. Every time Bowling Green seemed to hit a three, score on a layup or do something positive to take control of the game, Shafir would make a play.

"Well I really wanted to win this game, I tried to do whatever it took to help the team," said Naama Shafir. "Sometimes I tried to take [over] by myself."

Shafir's will and desire became infectious as her teammate Melissa Goodall (15 points) made some critical plays down the stretch. Her offensive rebound with 21 seconds left to play and consecutive free throws to put Toledo up by four seemed to be the game clincher.

But Bowling Green came down and hit a clutch three to cut the lead to one. Then with Shafir missing her next two free throws, it seemed like Bowling Green would have one more chance to win the game. But just like it was Toledo's defense that set the tone in the beginning of the game, they used it one more time: their defense caused one last turnover, which sealed the deal for victory.

And with that ended arguably one of the most impressive home winning streaks in the country at 23.

"Recent history, they've owned the MAC and more than anything, we would like to change that," said Cullop. "It took a great defensive effort, it took a great offensive effort as well, we played exceptionally well today and I'm very proud of our team."

Co-MVPs of the Night:

1. Naama Shafir: Shafir had 21 points and continued to keep Toledo steady on offense when Bowling Green made their run in the second half.

2. Toledo's Team Defense: Anytime a team can hold Bowling Green's top two scorers (Prochaska and Tracy Pontius) to well below their average is impressive and cause them to shoot a combined 5-17 (29%), that's good team defense.

Key Stats of the Night:

1. Second Chance Points, Toledo had 18 and Bowling Green had 7.